Hazey. Mossie Leavesden to Colerne. Rolls. Back in Anson. Wimpey pm, Slade Farm to Gatwick. Old OTU kite. Took off and found elevator trim u/s. Flew with flaps down at 120. Nice landing at Gatwick. Back in Anson (OTU = Operational Training Unit. Elevator trim = the Wellington had built in compensation for the nose up trim when flaps were lowered. This had failed, could have been nasty. Lowering flaps corrected the trim).

Hazey, becoming fine. Mossie, Hatfield to Upwood. Had arranged to be dropped at Hendon for leave, but fell through. Dropped at Hatfield, train to London. Up to Rosslyn. Saw my father, and went to meet Ros stayed at Rembrandt.

Given Tempest II but weather bad till PM, and factory shut. Anson to AD. Tempest V to Dunsfold. Had bet about starting. Mine went first go. Loops, rolls and got a bit lost. Perfect landing. Anson back. Saw Burnett and his yacht. (Starting = the Sabre engine was often difficult to start. Burnett and his yacht = this comes up again, see 25th Feb. No idea now what this is about).

My diary entries cease here. The earlier diary records of January to August 1943 are grouped in a separate folder. Some notes of my impressions on renewing acquaintance with these diaries whilst typing them in 2012/2013 are as an appendix to the 1943 diary files. 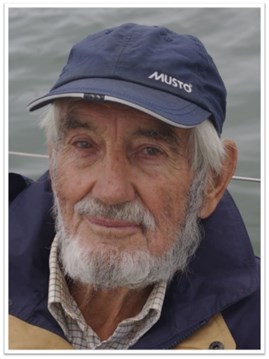 Peter Garrod aboard his yacht 'Artimon'. Taken by John Walker, courtesy of John Webster and the ATA Association