Leuchars, near St Andrews, has had a long and eventful military history. The first unit to arrive to spend any significant time at Leuchars was the Grand Fleet School of Aerial Fighting and Gunnery, which was at the site from the end of 1918 until 1920. At various times between 1920 and 1922 Nos 3, 203, and 205 Squadrons at what had now become RAF Base Leuchars operated aircraft such as Sopwith Camels, Parnall Panthers and Airco DH.9As. Subsequently, various Flights resided here while away from aircraft carriers as part of the Fleet Air Arm of the Royal Air Force.

Leuchars was one of the main RAF Training Bases through the inter-war period. No 1 Flying Training School later reformed at the airfield in the spring of 1935, training Fleet Air Arm pilots before moving to Netheravon in 1938. Armament training was also carried out between 1935 and 1939, using the range at Tentsmuir.

A major change occurred during 1938 as Leuchars passed to RAF Coastal Command control, with Avro Ansons of Nos 224 and 233 Squadrons moving in as the summer ended. By the time of Germany’s invasion of Norway anti-shipping patrols had become the primary task for these and various subsequent units, which often stayed for considerable periods of time. Notable among them mid-war were Handley Page Hampden elements, Nos 144 and 455 Squadrons. Other prominent aircraft types around this time included Bristol Blenheims, Beauforts and Beaufighters, as well as Lockheed Hudsons, while the de Havilland Mosquito landplane portion of Norwegian No 333 Squadron formed at Leuchars on 10 May 1943 prior to moving to Banff in September 1944. By the end of the Second World War several U-boats had been sunk by aircraft flying from Leuchars.

Leuchars always proved a versatile airfield, not least in wartime, by accommodating aircraft in widely differing roles. A long-term resident of the airfield moved to the site in the spring of 1940, the Communications Flight for No 18 Group, with a very wide variety of aircraft employed during and after the Second World War. The Flight remained at Leuchars, aside from briefly staying at Turnhouse into the 1960s. Photographic reconnaissance aircraft became most important residents during 1941-44, especially once No 540 Squadron formed with Mosquitoes in October 1942. No 3 Armament Practice Camp restarted armament training at Leuchars from November 1941, continuing to operate until the end of the war and eventual disbandment in September 1945.

Some of the most unusual missions to be carried out during the Second World War from Leuchars were by civilian Mosquitoes. Operated by BOAC, these aircraft transported important ball bearings and machine-tool steel from Stockholm through enemy airspace; passengers travelled within the bomb bays of the aircraft. The Americans mounted broadly similar and equally dangerous flights using Consolidated Liberators, complementing the more offensive maritime patrol RAF examples of Nos 206 and 547 Squadrons over the final year or so of fighting.

Varied forms of flying continued to take place after 1945, with the School of General Reconnaissance reforming at Leuchars in 1946, before disbanding in 1947. Operational Conversion Units used Leuchars at this time, training pilots on aircraft such as Supermarine Spitfires, de Havilland Mosquitoes and Vampires. No 120 Squadron maintained the maritime reconnaissance role with primarily Avro Lancasters until leaving for Kinloss as the decade ended.

Perhaps the role that Leuchars is most famous for began in the early 1950s as both day and night fighters moved in once the station switched to RAF Fighter Command control. No 151 Squadron’s Vampires were eventually replaced by Gloster Meteors, de Havilland Venoms and subsequently Gloster Javelins by the end of the 1950s as part of the squadron’s ten year residency. Another long serving unit was No 43 Squadron, initially operating Meteors, then followed by Hawker Hunters from 1954. The unit moved to Cyprus and then Aden during the early 1960s before disbanding, then reforming at Leuchars in 1969, flying McDonnell-Douglas F-4 Phantoms. More Javelins and English Electric Lightnings of Nos 11 and 23 Squadrons in turn appeared before the 1970s saw the arrival of No 111 Squadron, as well as the RAF Post Operational Conversion Unit (later known as the Phantom Training Flight) to train Fleet Air Arm aircrews. After many years, shore-based operational naval activity returned for a time too, between 1972 and 1978, when Phantoms of No 892 Squadron were not aboard HMS Ark Royal. During all this time Search and Rescue (SAR) helicopters also ensured that Leuchars continued to be firmly in the public eye, as did two University Air Squadrons to a lesser degree.

The RAF’s Phantoms were replaced by the Panavia Tornado F3 during the late 1980s, continuing to provide air defence cover for northern Britain and countering any possible Russian threat. These were replaced by the Eurofighter Typhoon, with No 6 and then No 1 Squadrons reforming at the start of the 2010s to operate the type as the Tornados were retired. The Typhoons however moved to Lossiemouth in 2014, taking with them the responsibility of the northern Quick Reaction Alert, with aircraft at Coningsby in Lincolnshire continuing to cover the south. Leuchars was transferred to the Army shortly afterwards and the majority of flying has since ceased, aside from limited use as an Emergency Landing Ground and for training. The two runways therefore remain in good condition, in addition to the hangars and support buildings. Two rare First World War Double Royal Flying Corps General Service Aircraft Sheds are among the buildings to survive almost the entirety of Leuchars’ military life. About the only aspect of aviation here which has tended to struggle has transpired to be civil aviation, as it has never gained a firm foothold over the years since the Second World War despite many local hopes, though civil and military aircraft use has as a general rule never easily mixed at Britain’s airfields. 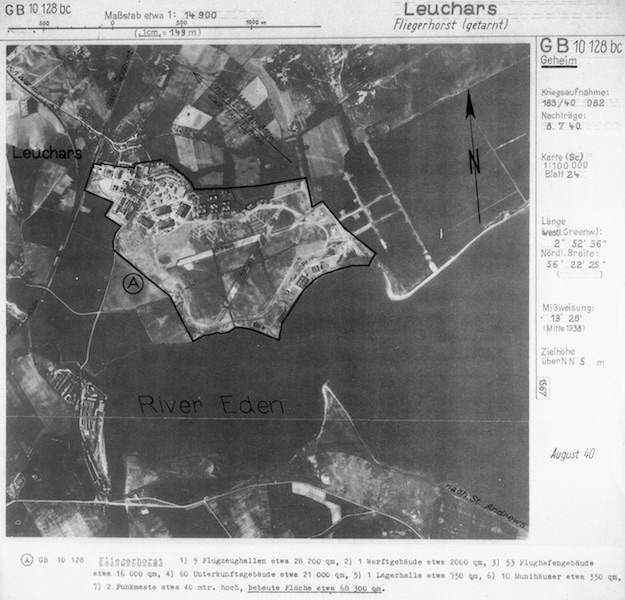 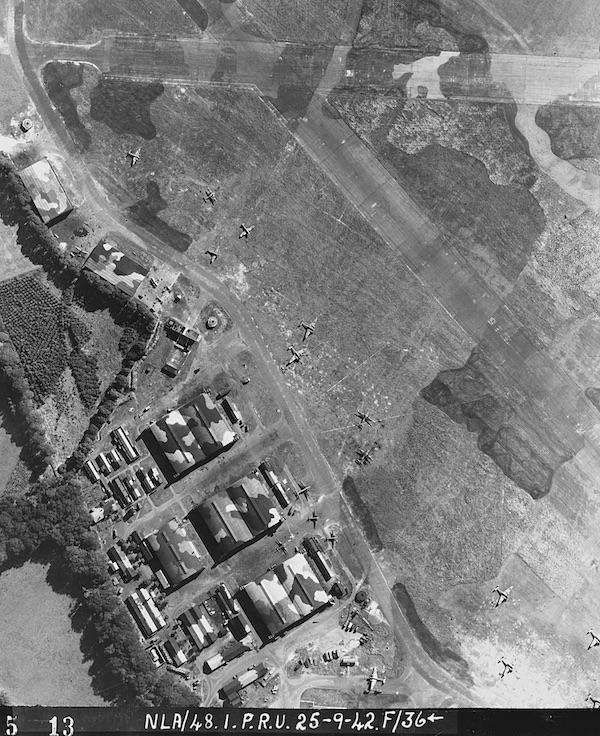 RAF aerial photograph of Leuchars. Visible are six camouflaged hangars built in the 1920s, part of the runways and four type 27 pillboxes. In the area to the south of the hangars are several different types of aircraft including Supermarine Spitfires, Handley Page Hampdens and Lockheed Lodestars, 25 September 1942. © Courtesy of HES (RAF Word War II Aerial Photographs). Licensor canmore.org.uk 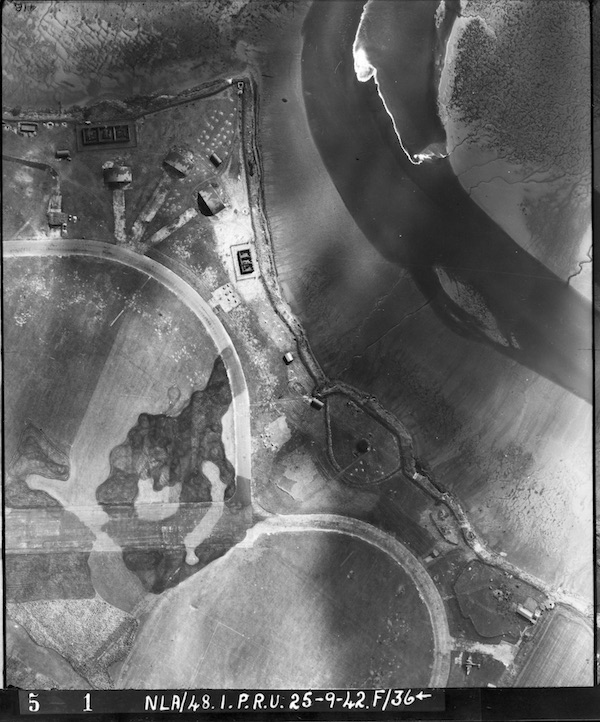 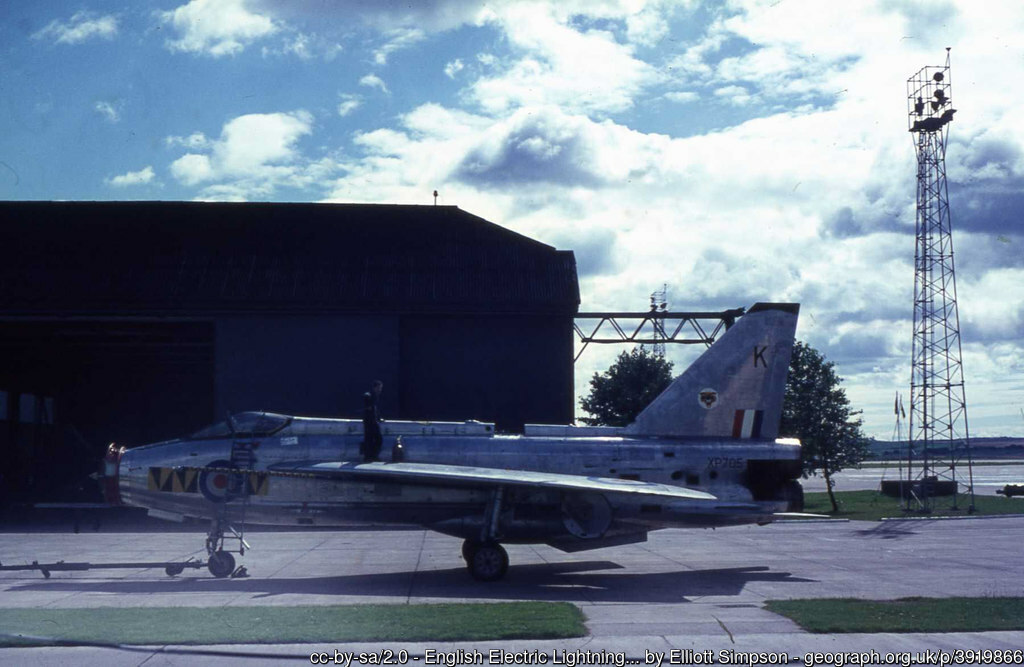 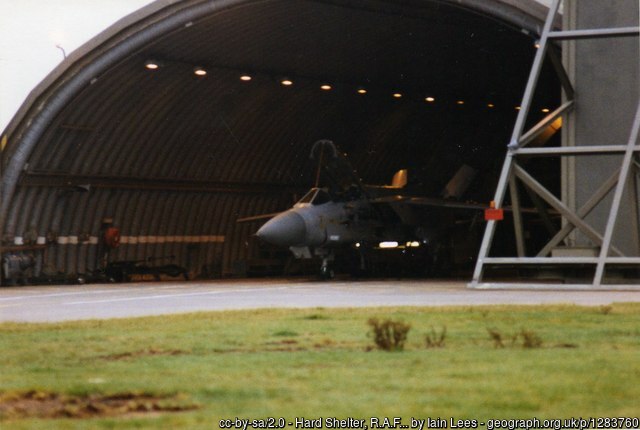 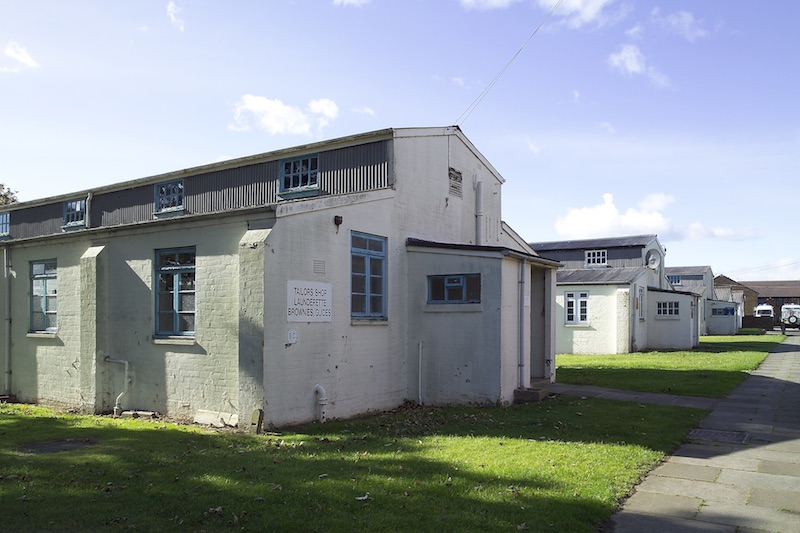 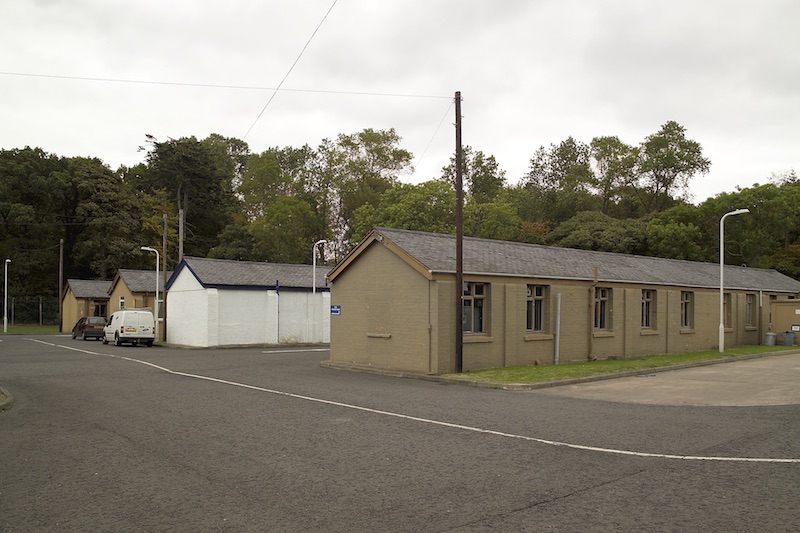 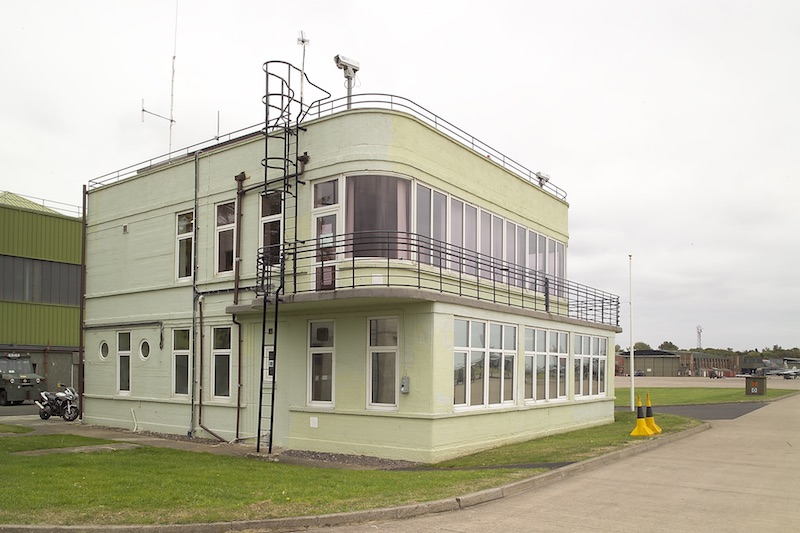 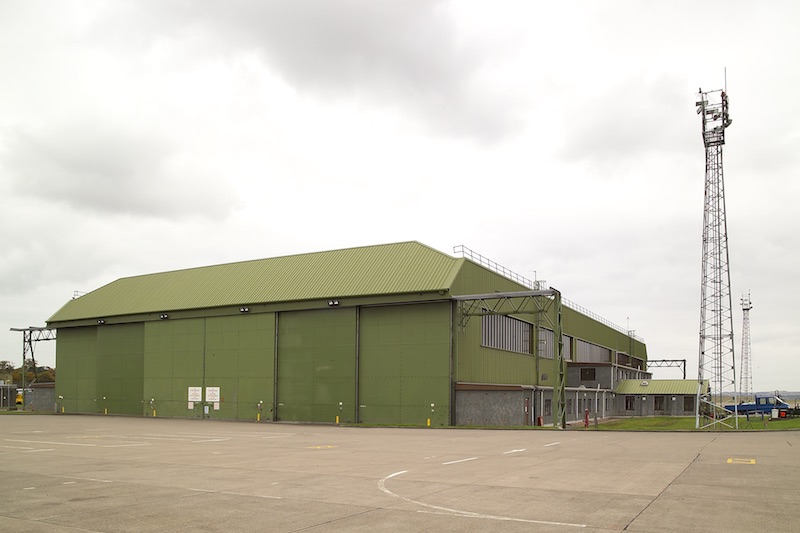 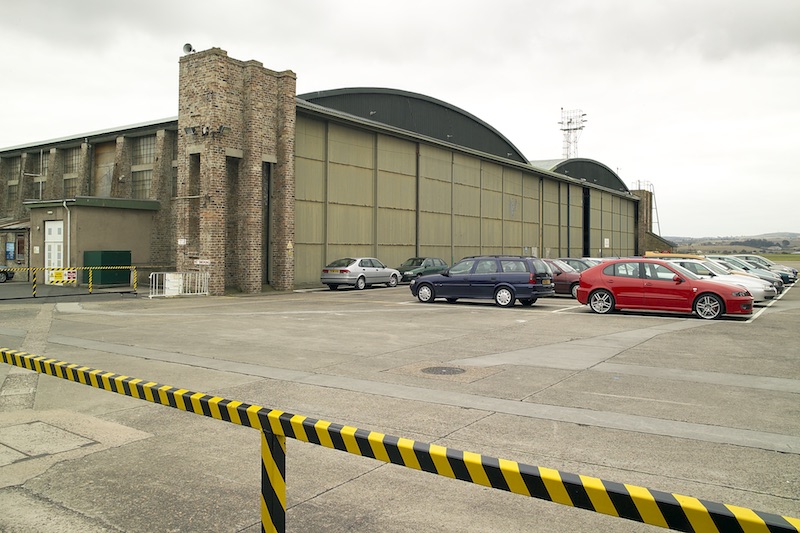 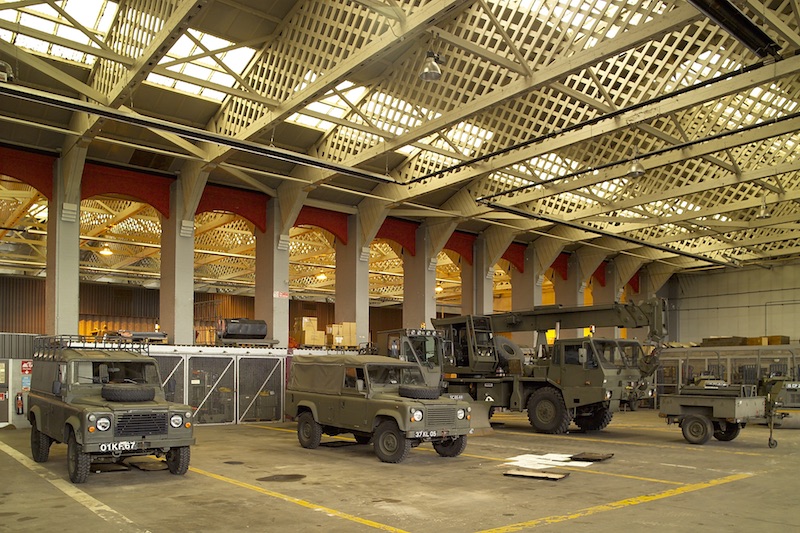 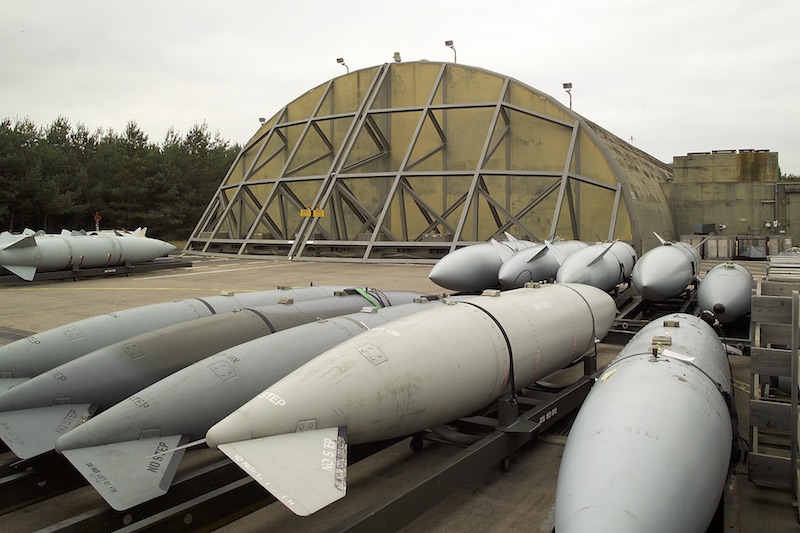 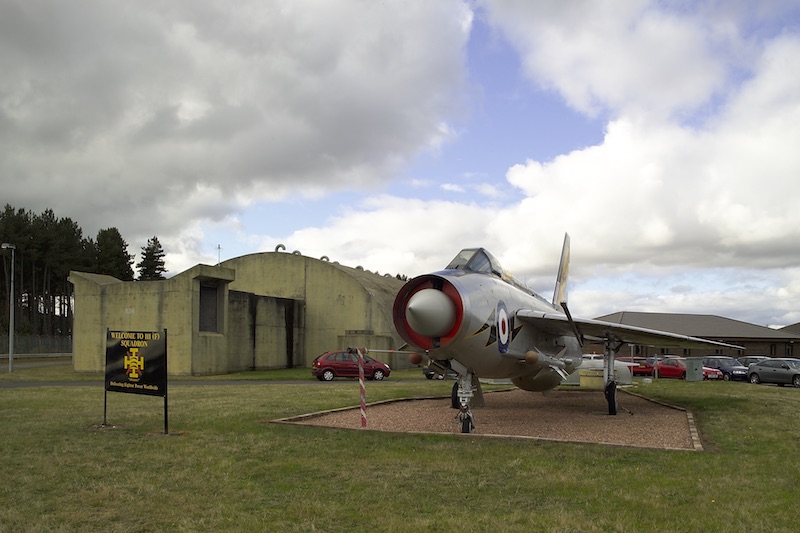 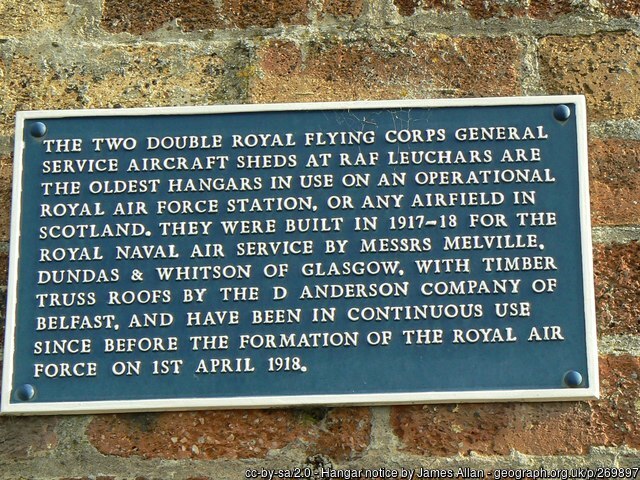 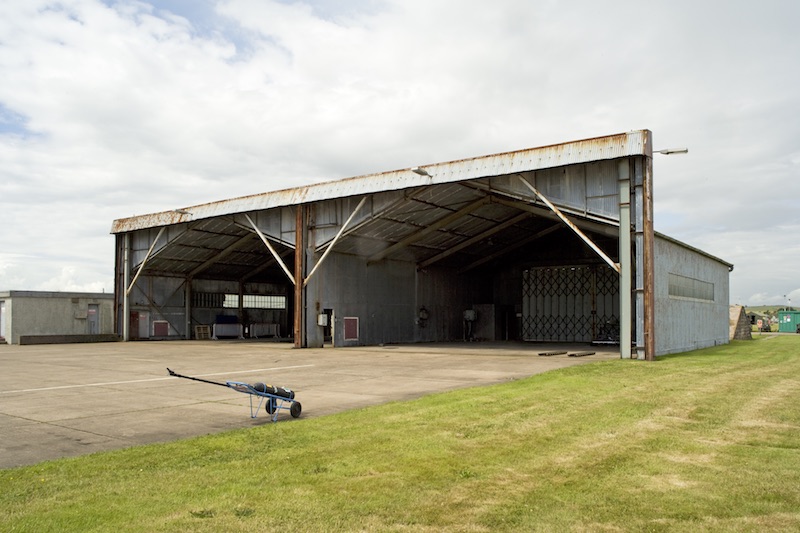 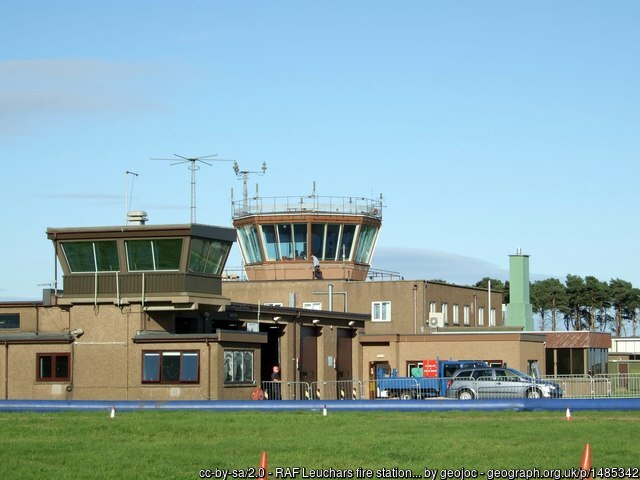 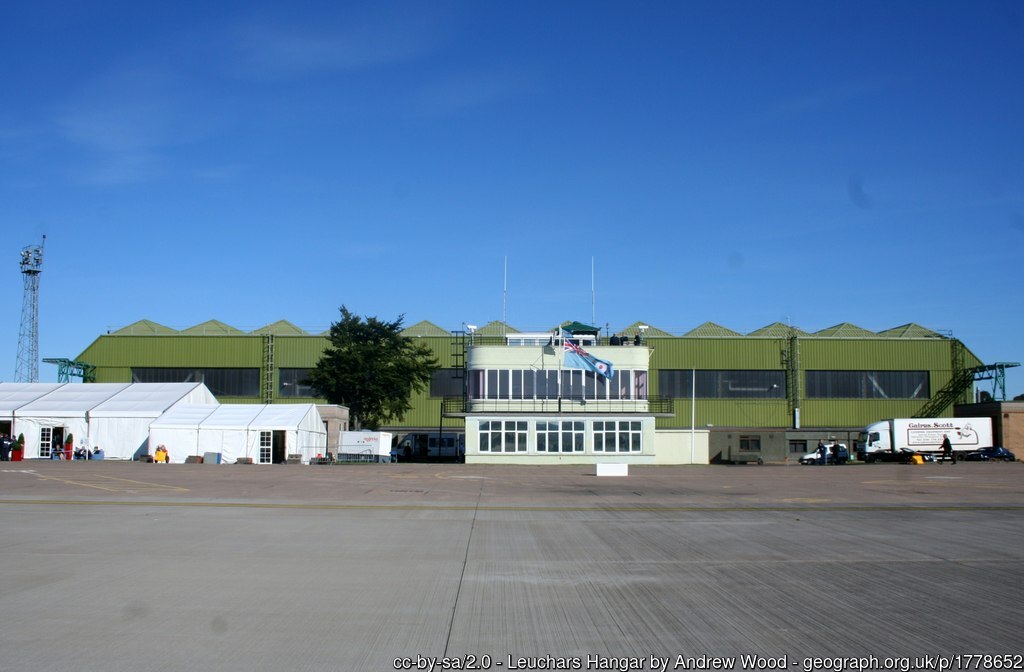 A hangar and older control tower at Leuchars, 12 September 2009. 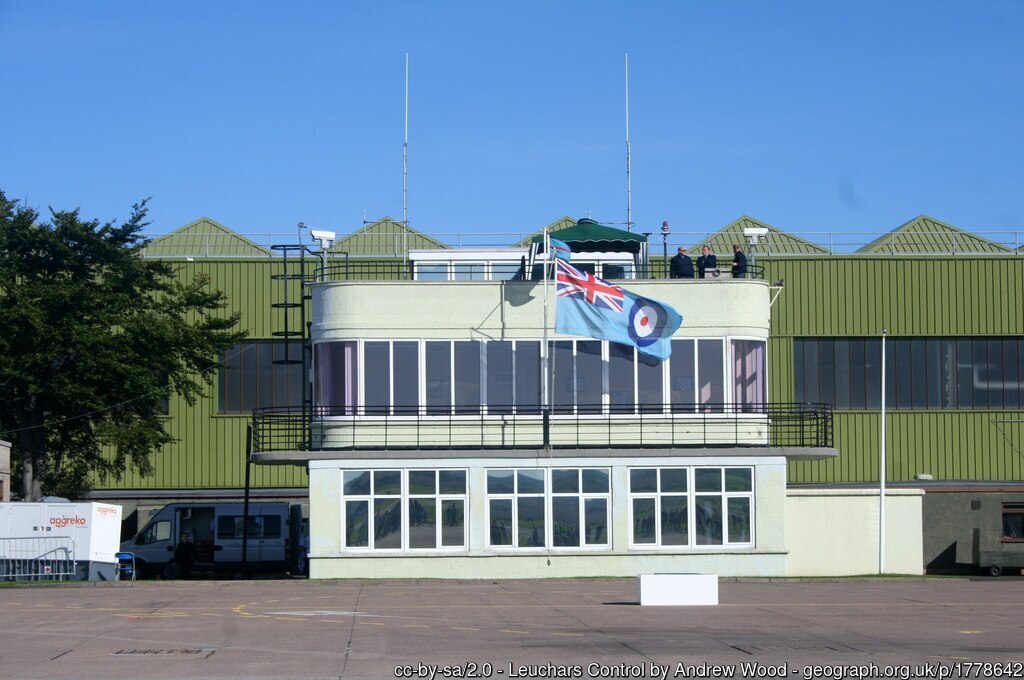 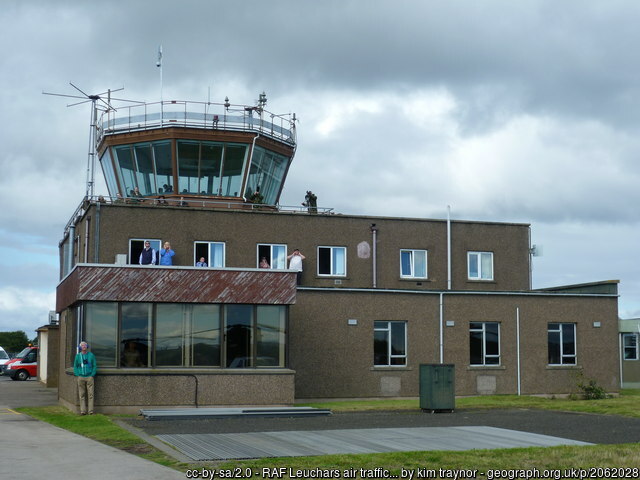 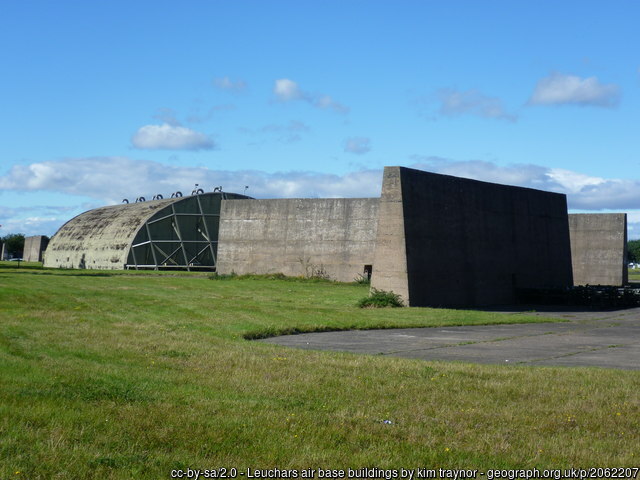 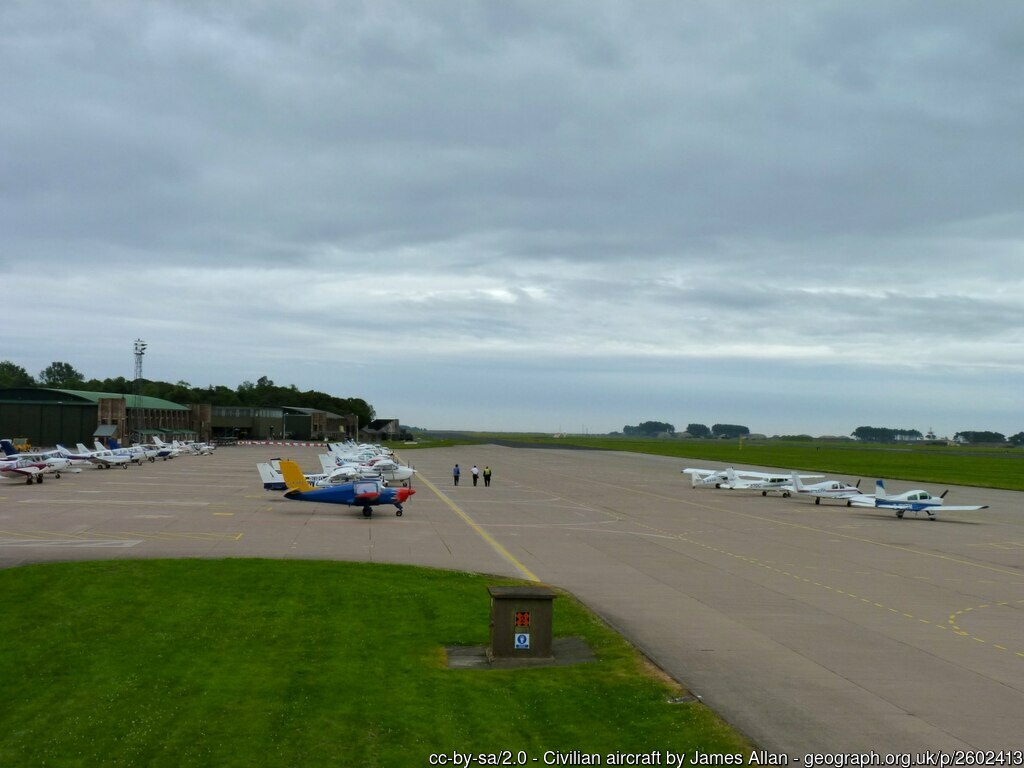 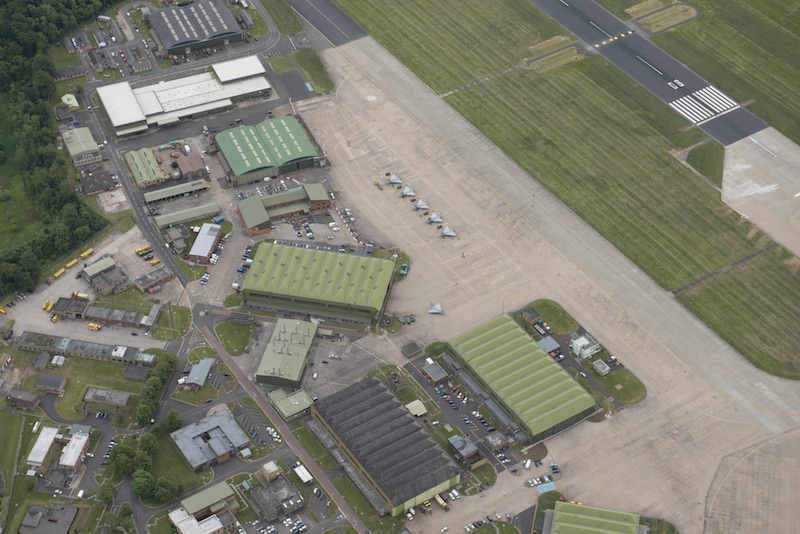 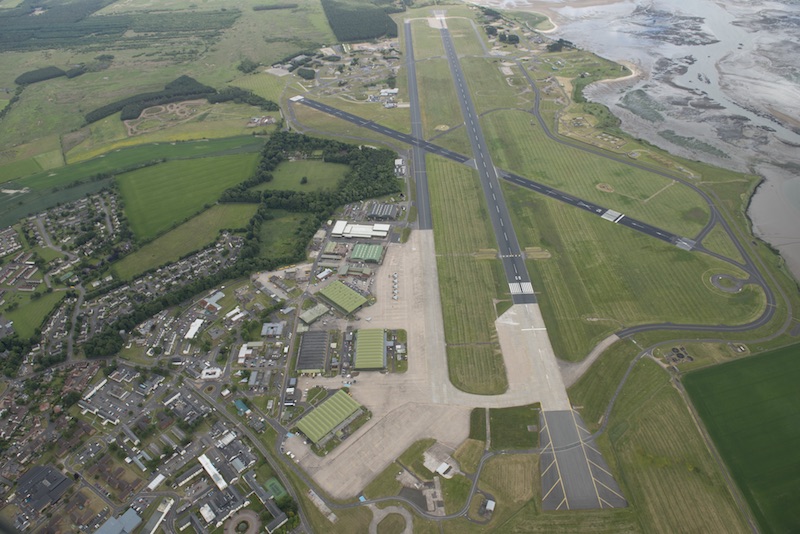 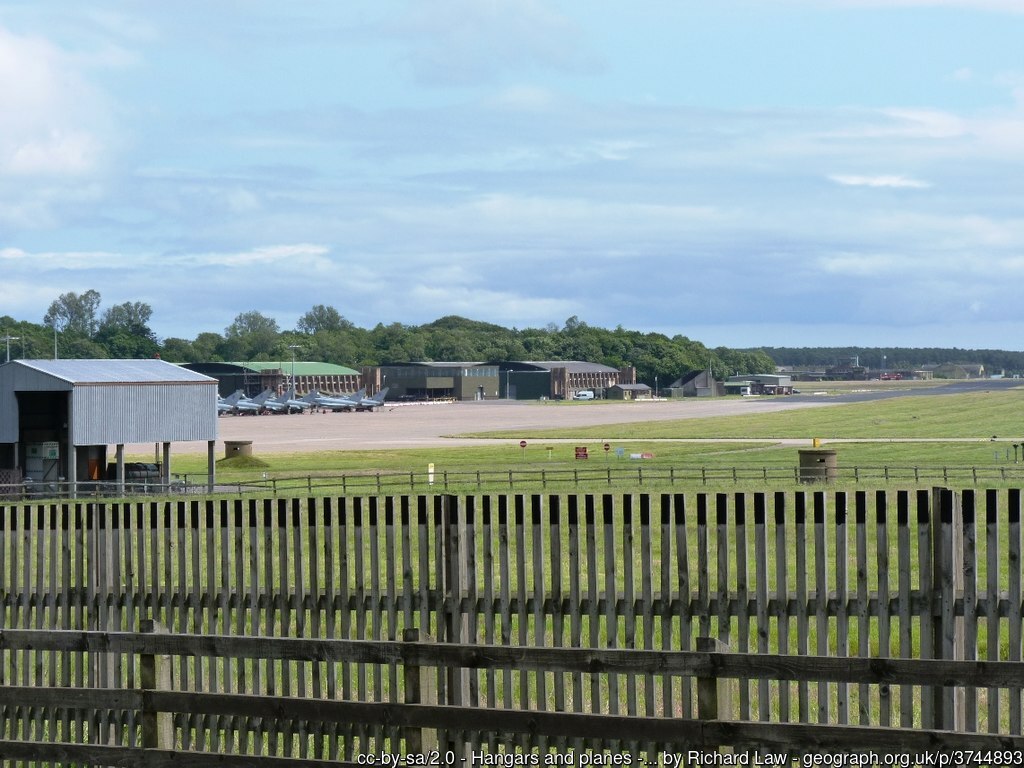 Eurofighter Typhoons lined up in front of hangars at Leuchars, 4 July 2013. 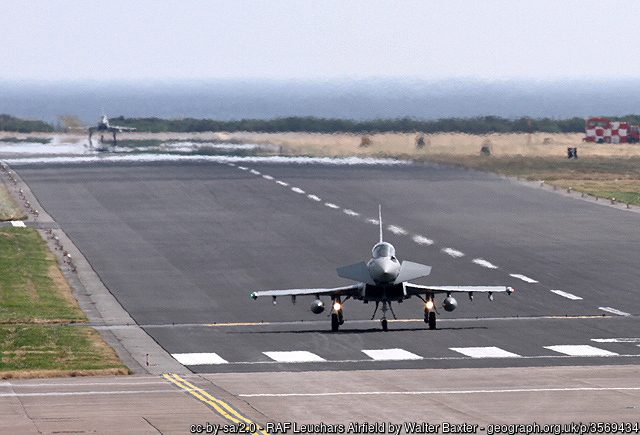 Eurofighter Typhoons on a runway at Leuchars, 17 July 2013.

Queen Elizabeth II presents a Squadron Standard to No 43 Squadron at Leuchars, 1957. Courtesy of British Pathé 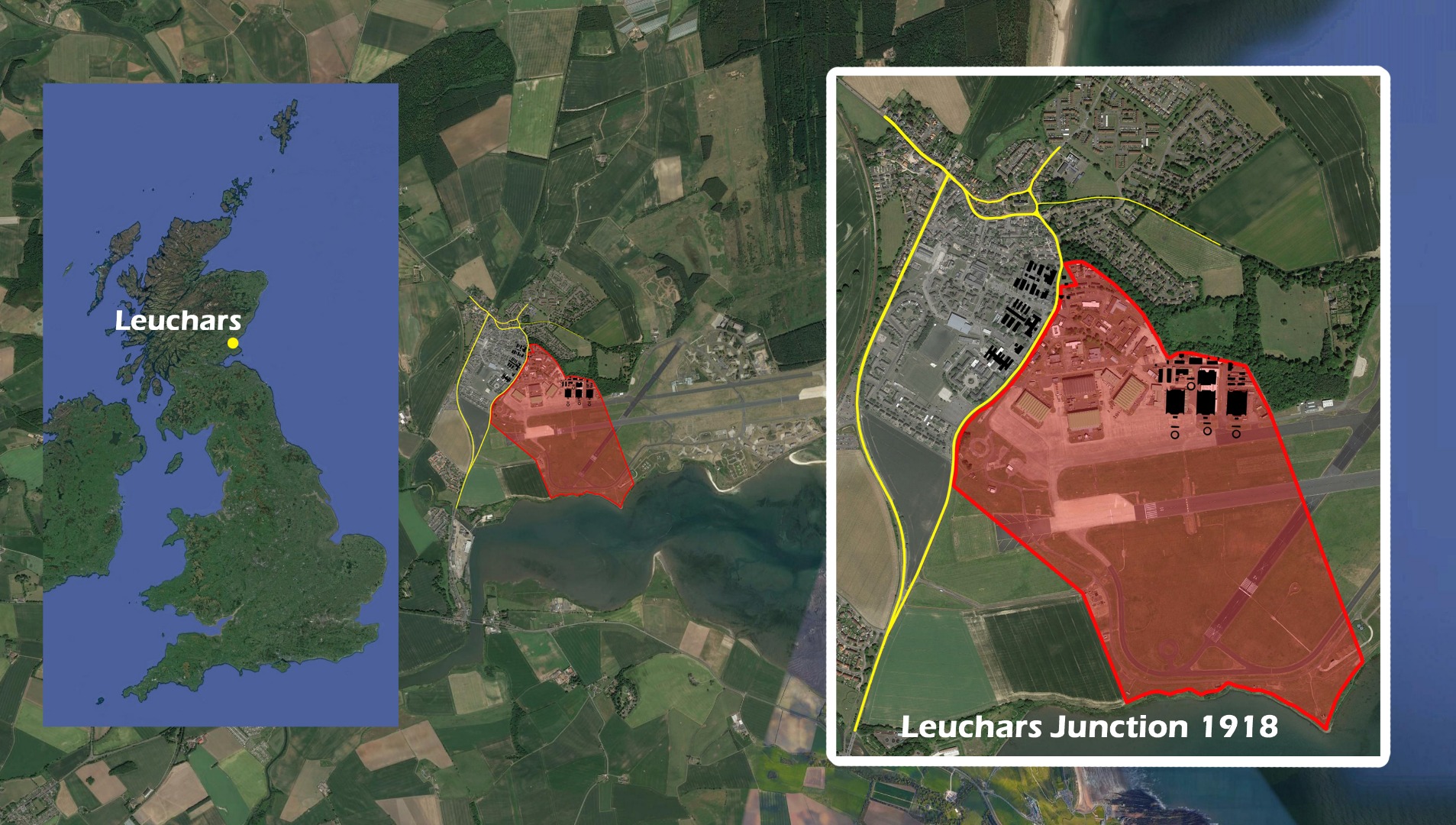