Wood chips glued to the three asphalt runways as at various other wartime airfields helped camouflage them; the wood connection survived for years in another way as a nearby sawmill held a private aviation museum.

Errol, located between Perth and Dundee, opened as an RAF station for the training aircraft of No 9 (Pilots) Advanced Flying Unit on 1 August 1942. The general area was no stranger to flying as it had seen early flights by Scottish aviation pioneer Preston Watson during the early 1900s but sadly details of his activities are somewhat shrouded in mystery and anecdotal evidence.

No 9 (P) AFU primarily flew Miles Masters – replaced during the summer of 1944 by North American Harvards - and Hawker Hurricanes until the unit disbanded in June 1945. Errol during wartime also notably became home to No 305 Ferry Training Unit which trained aircrews from the Soviet Union between January 1943 and April 1944 to operate Armstrong Whitworth Albemarle transports. An initial expected delivery of as many as 500 aircraft never materialised and in the event only 14 Albemarles left for Russia, two of them being lost en route.

Errol continued in military use under the control of No 260 Maintenance Unit until closure in the summer of 1948 to store equipment. Much of the material was brought in by Douglas Dakota transports and loading and unloading carried out by German PoWs held in detention nearby. Eventually the airfield was sold in 1961 but from the late 1940s Errol was proposed as an airport until these plans eventually fizzled out owing to local objections two decades later.

Most of the hangars have since disappeared but much of this airfield still survives elsewhere such as the once derelict control tower which has become in modified form a private dwelling. The northern section of the 05/23 runway continues to see flying as Paragon Skydiving has resided for many years to conduct free-fall parachuting. Many of the other remaining buildings now serve a variety of uses as large parts of the airfield are now owned by the Morris Leslie Group for plant and vehicle auctions, as well as hosting Scotland’s largest car boot sale and outdoor market. A new housing scheme has been planned but Errol retains the atmosphere of a World War Two airfield.

Photographs from the unveiling of the ABCT memorial marker on 29 April 2012: 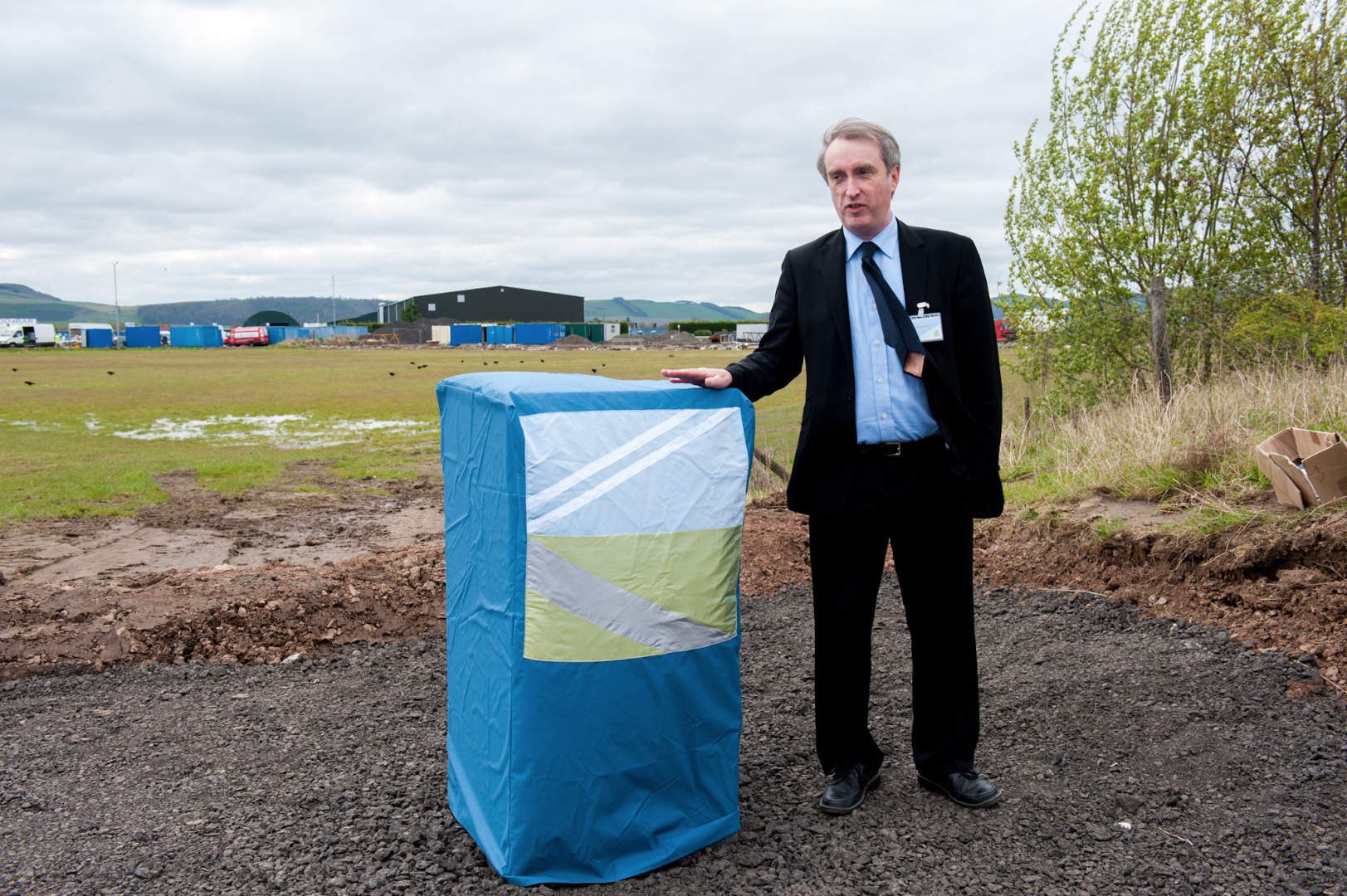 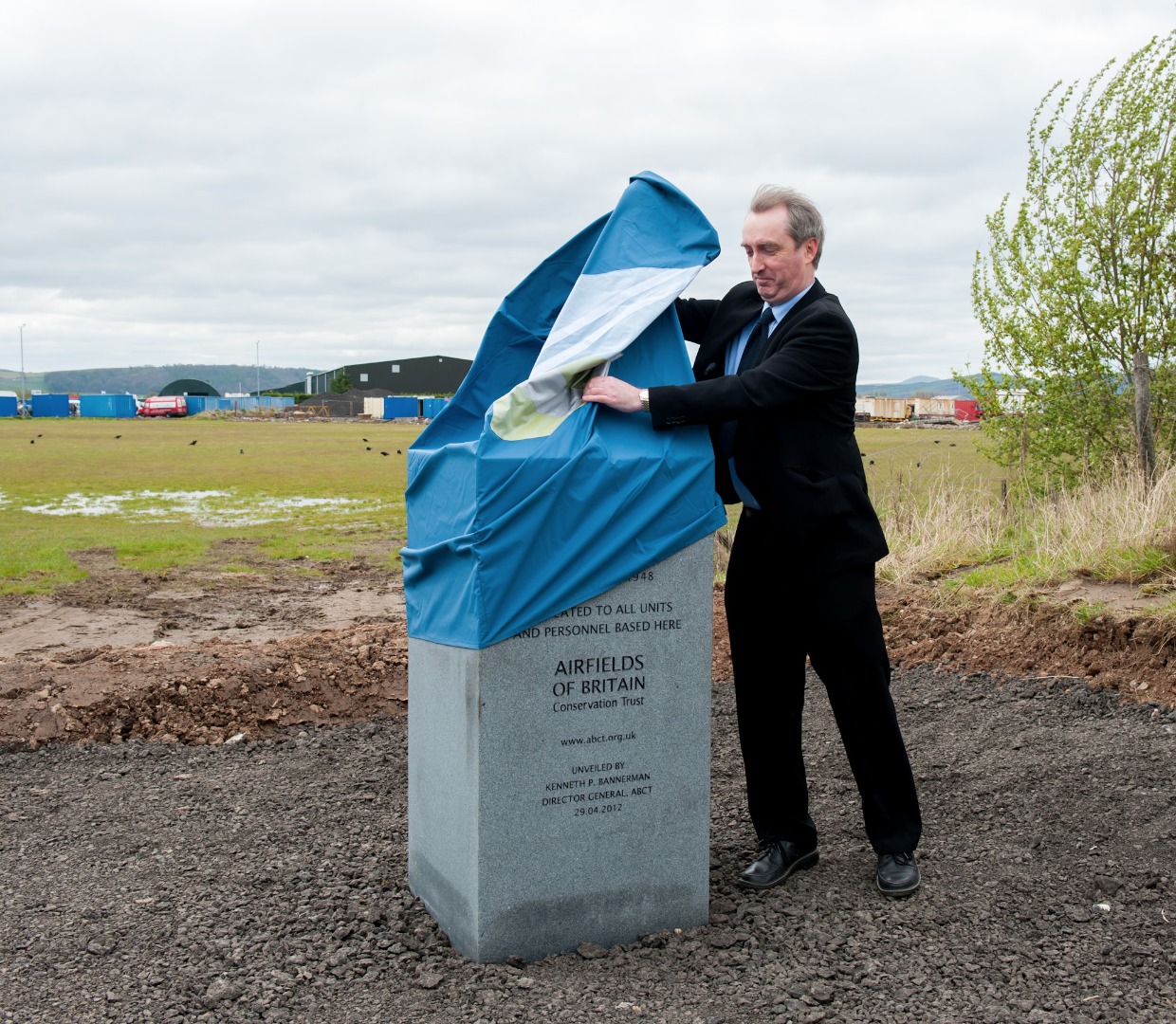 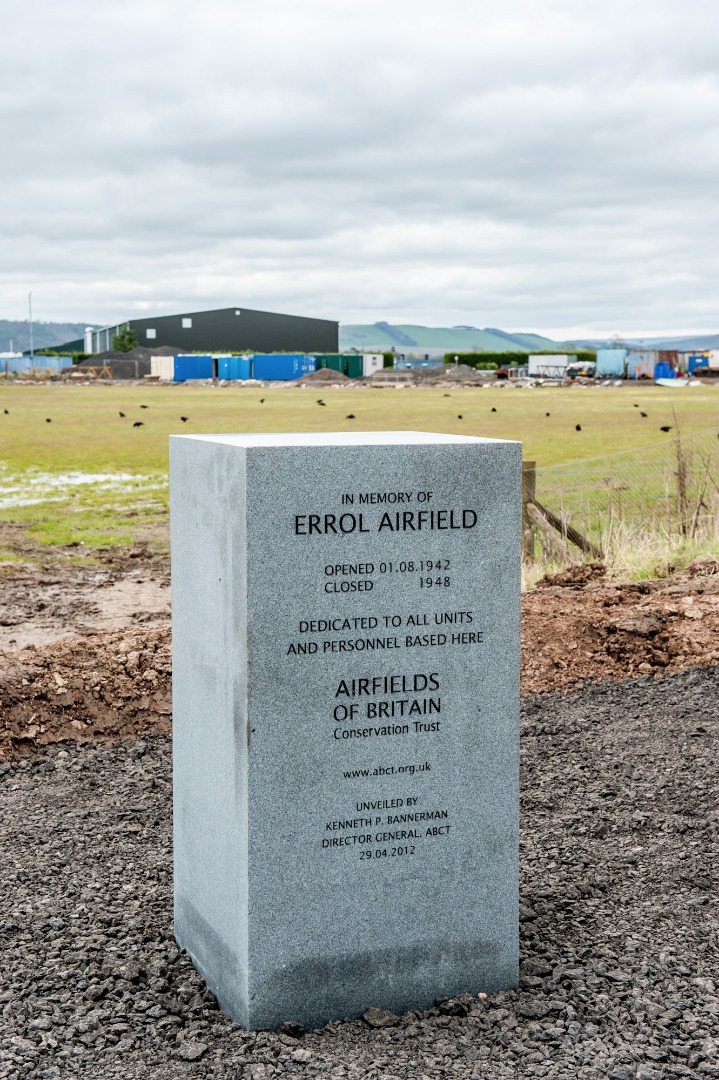 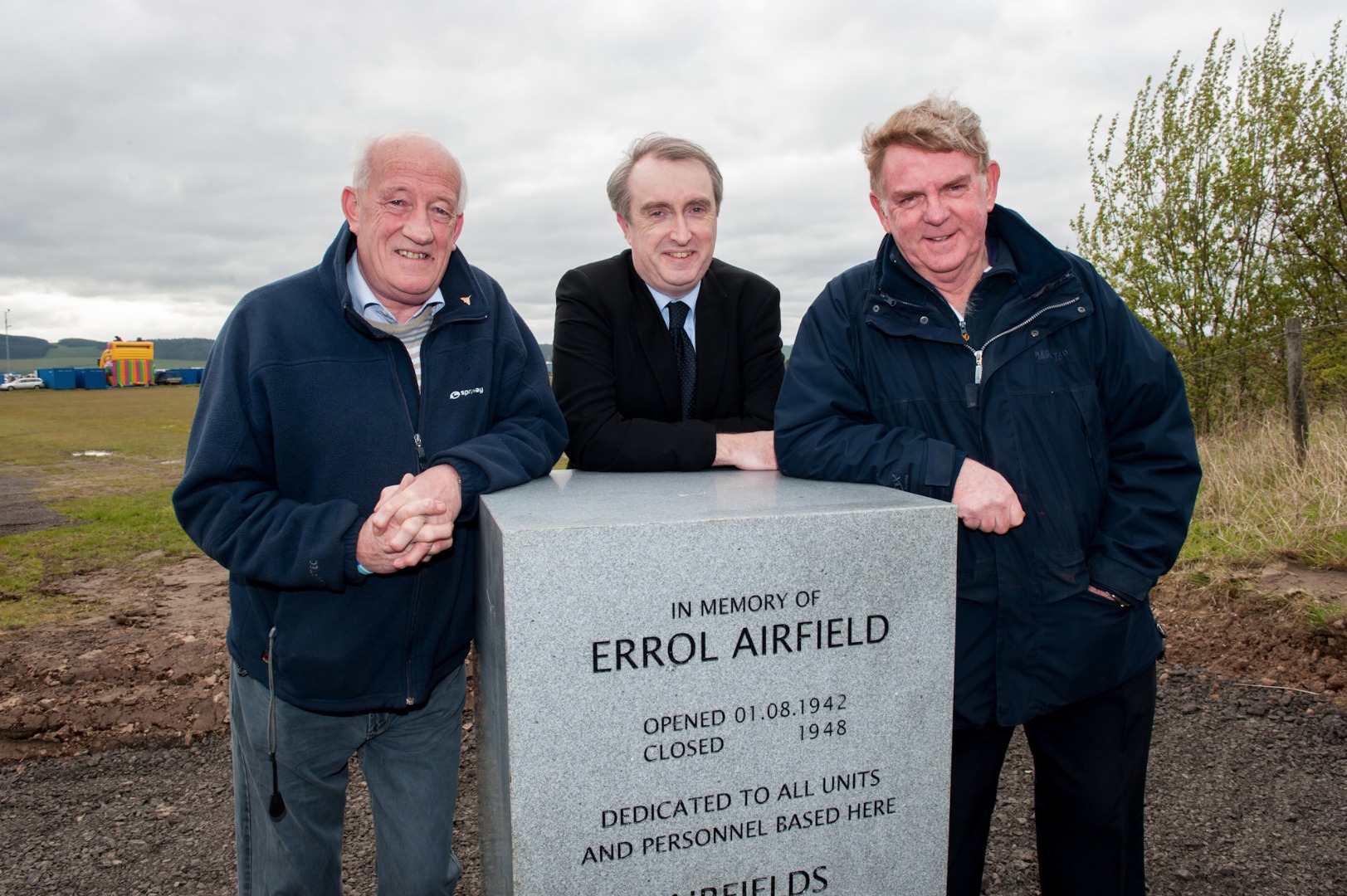 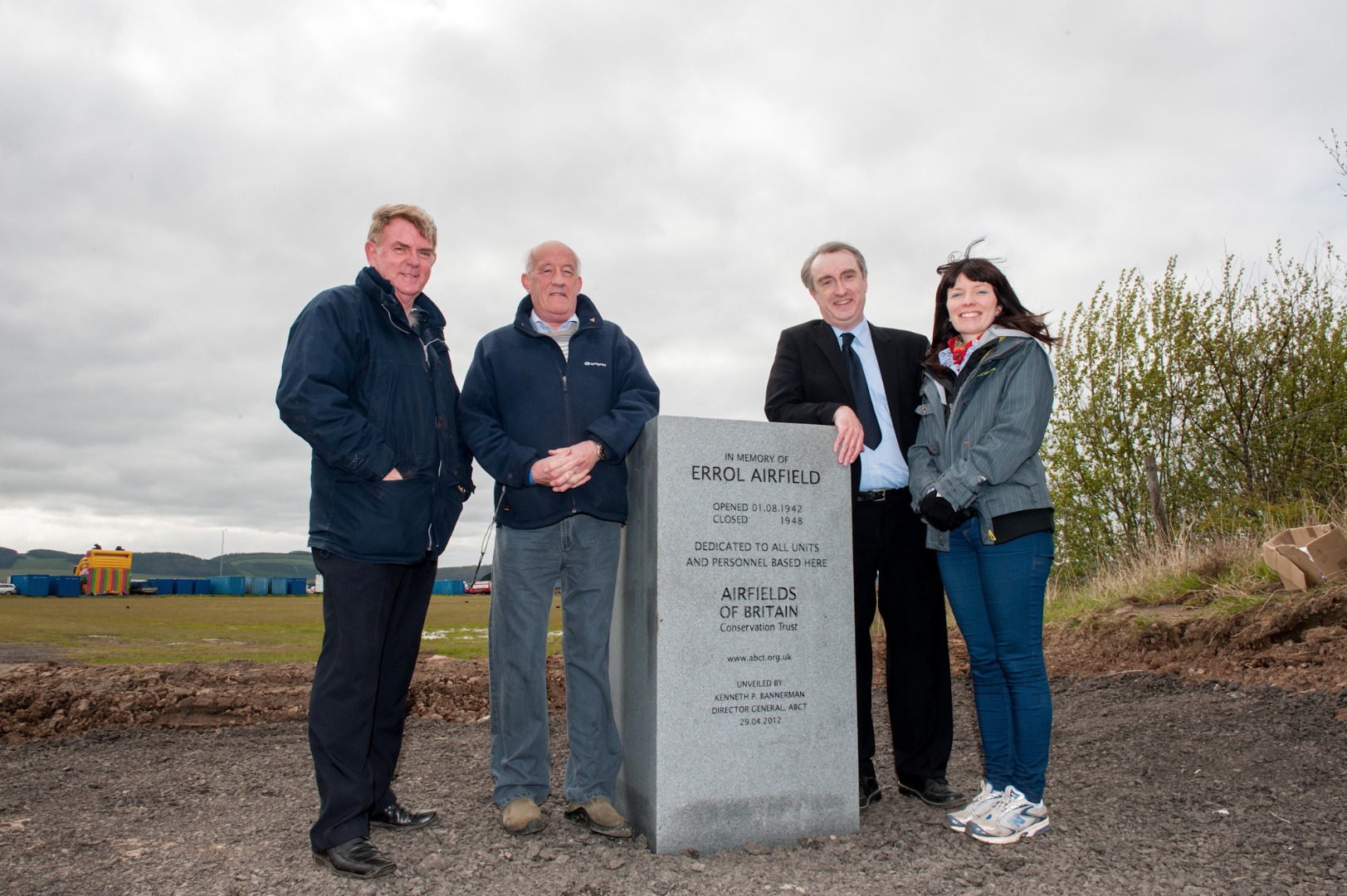 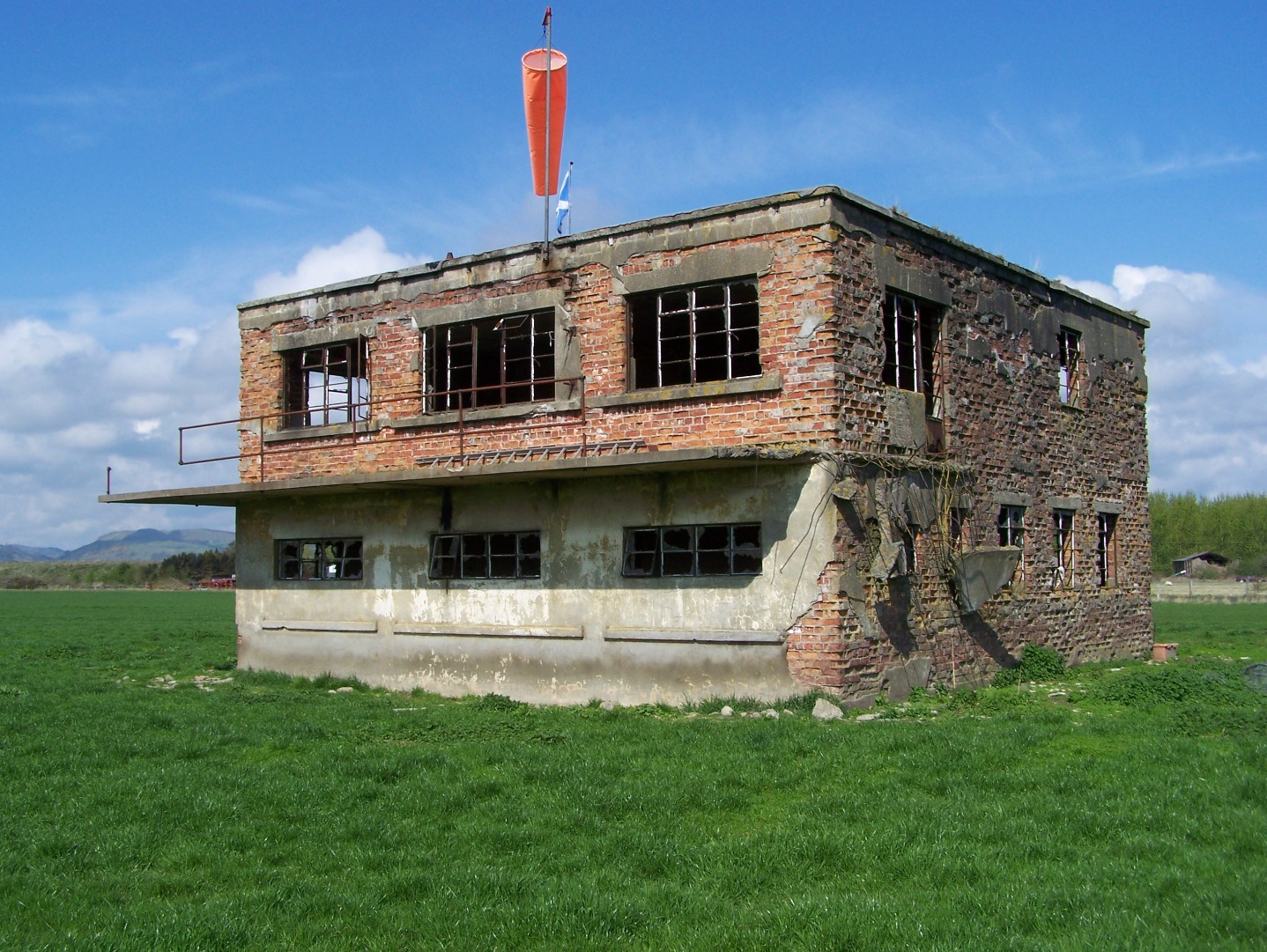 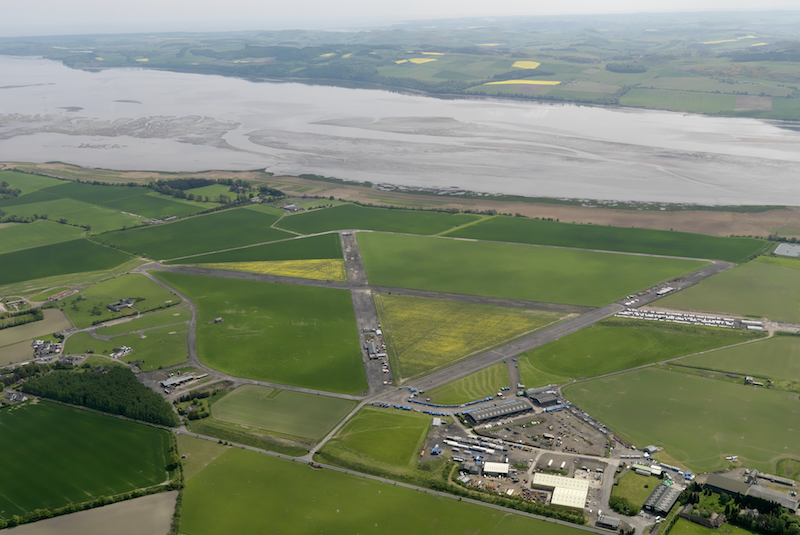 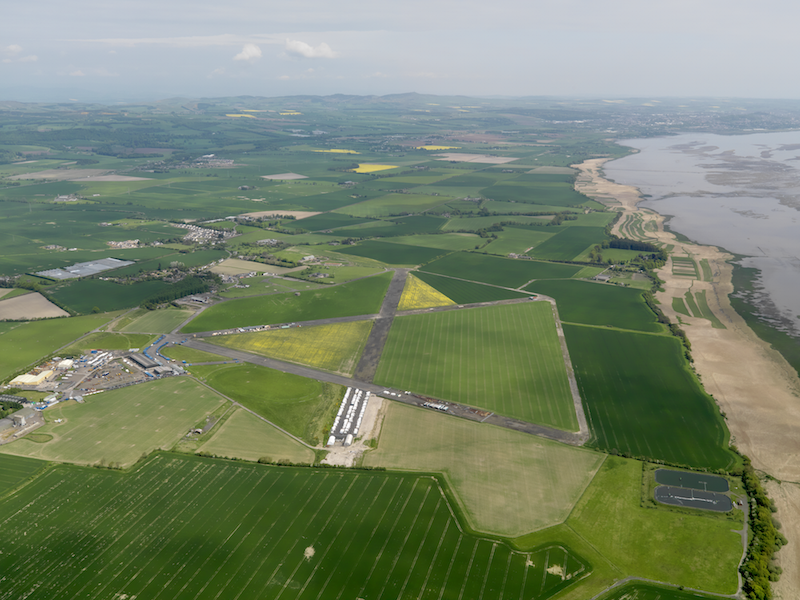 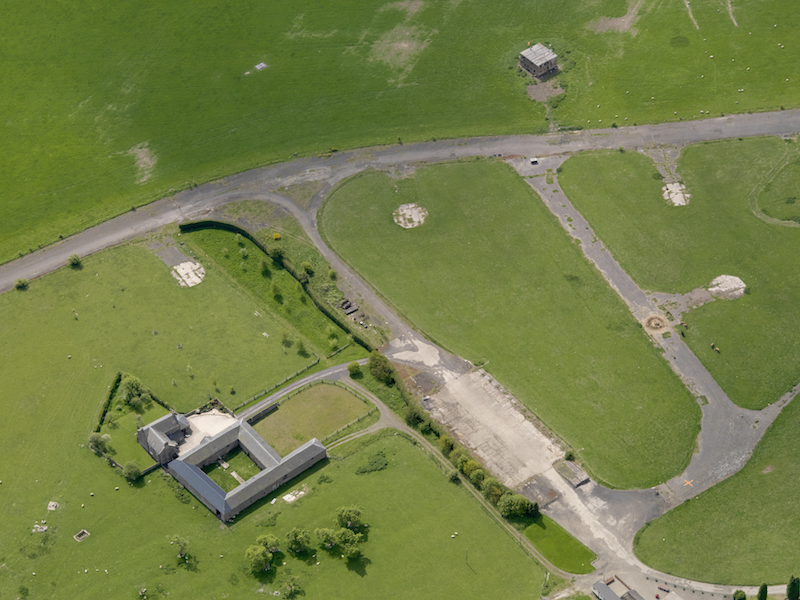 Aerial view centred on Muirhouses farmsteading, with the control tower and part of the dispersal area adjacent, taken from the east, 20 May 2008. © Crown Copyright: Historic Environment Scotland. Licensor canmore.org.uk 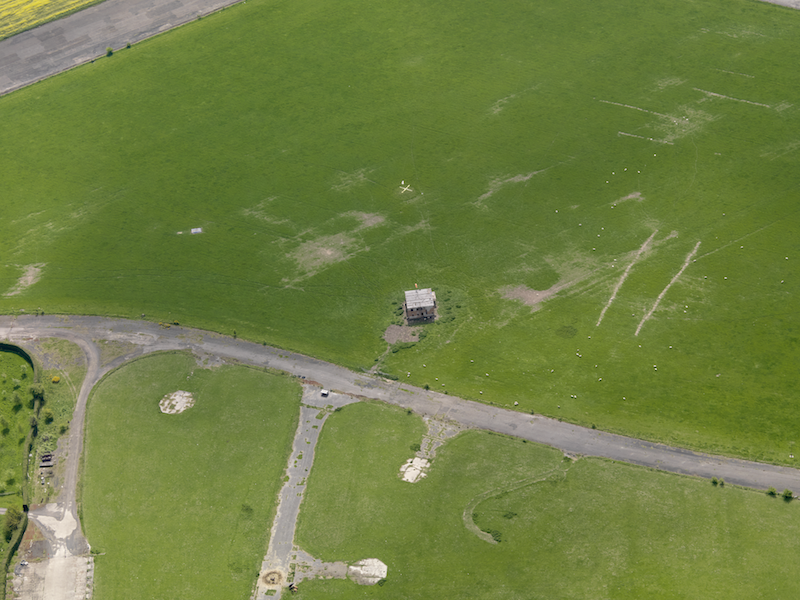 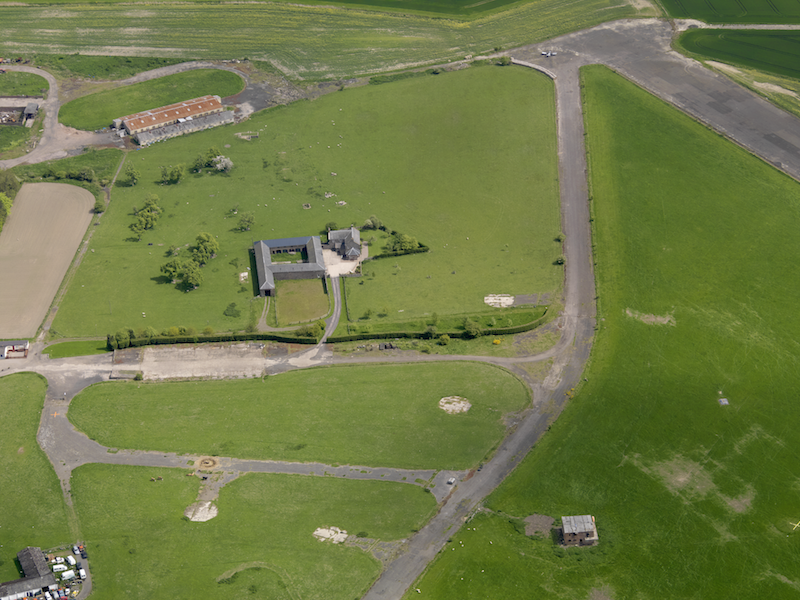 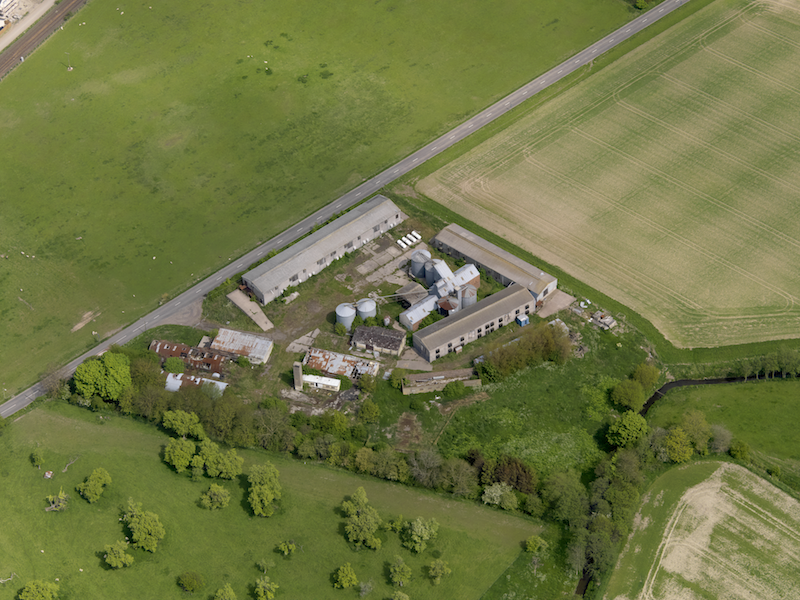 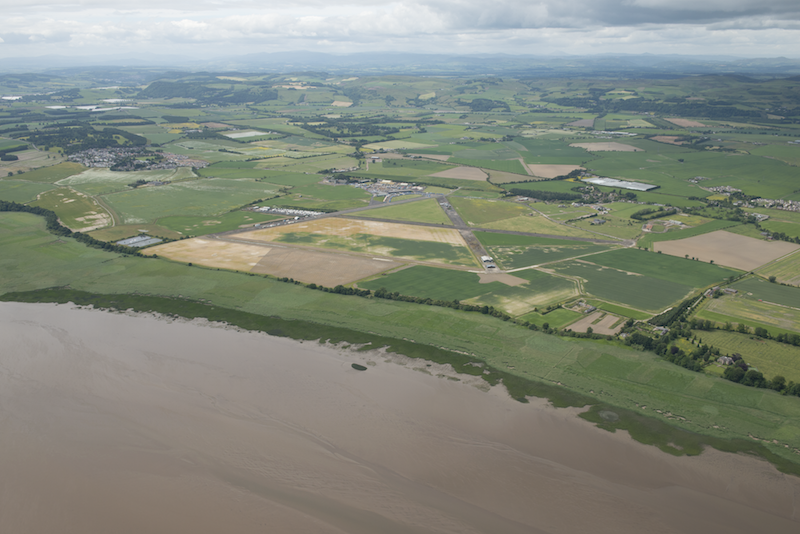 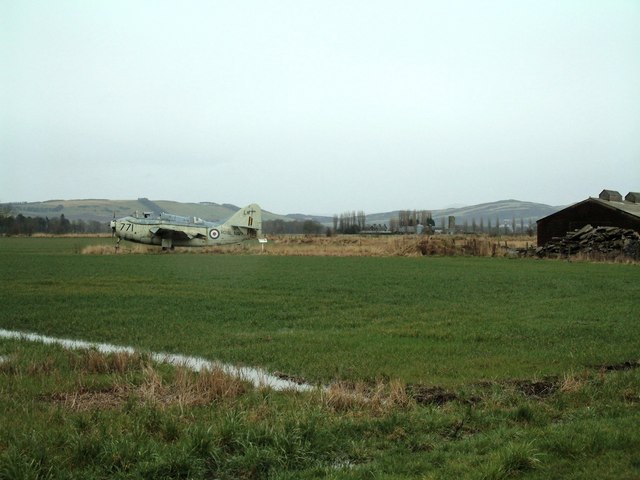 A Fairey Gannet at Errol, 28 March 2006. © James Allan and licensed for reuse under this Creative Commons Licence 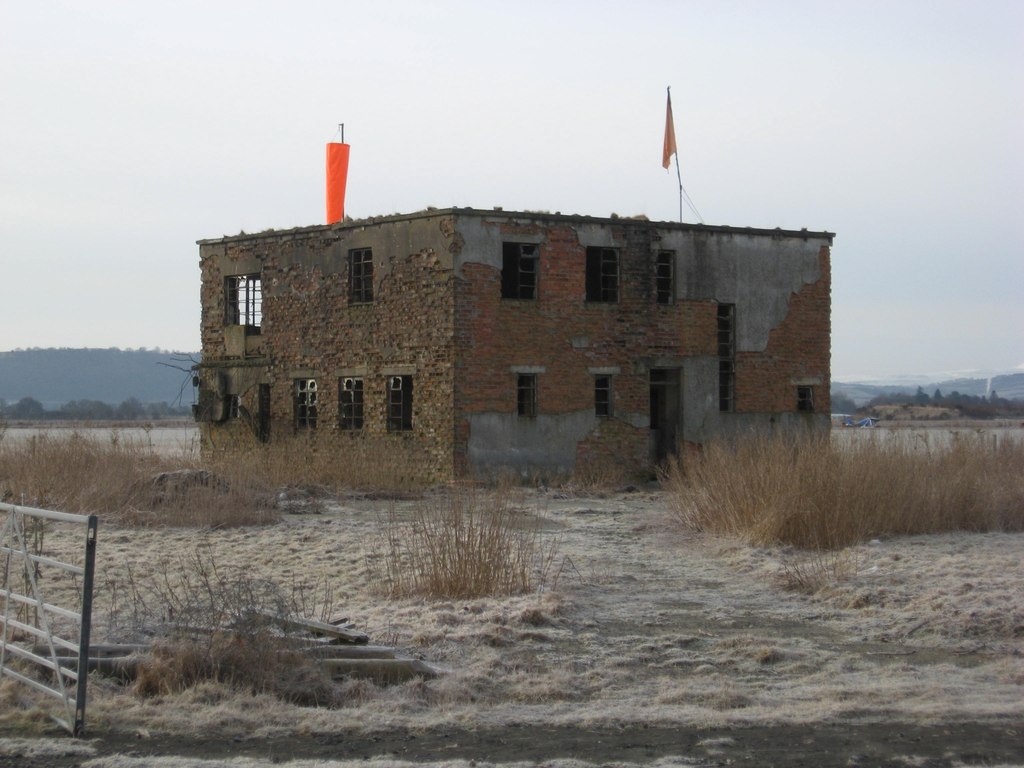 The control tower at Errol, 3 March 2010. © Dr Duncan Pepper and licensed for reuse under this Creative Commons Licence 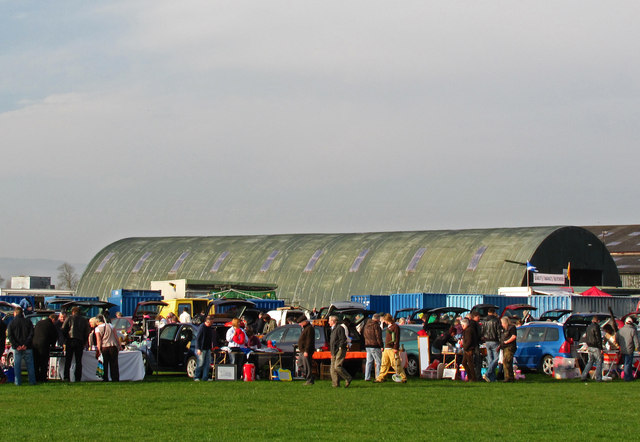 Errol airfield being used for a Sunday car boot sale, 10 April 2011. © William Starkey and licensed for reuse under this Creative Commons Licence 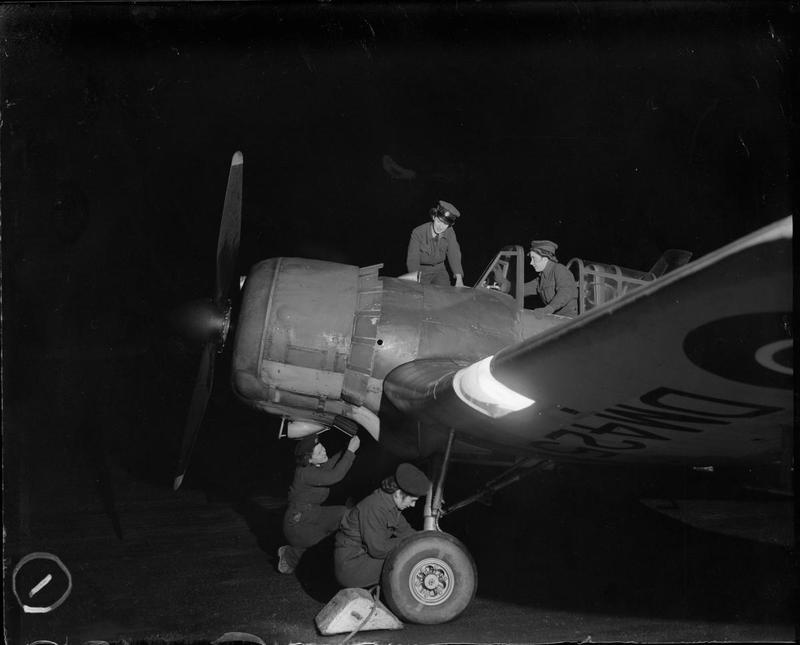 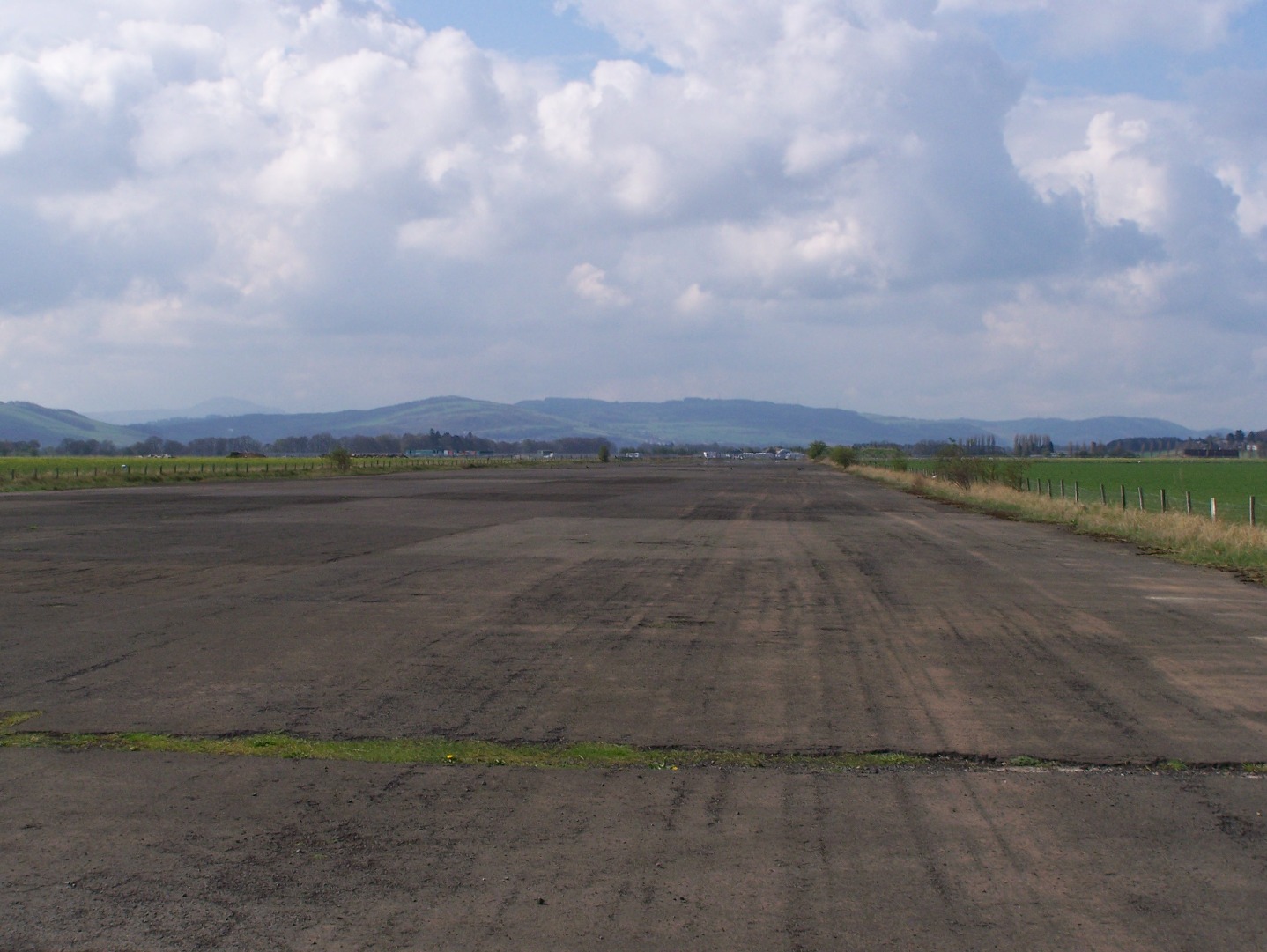 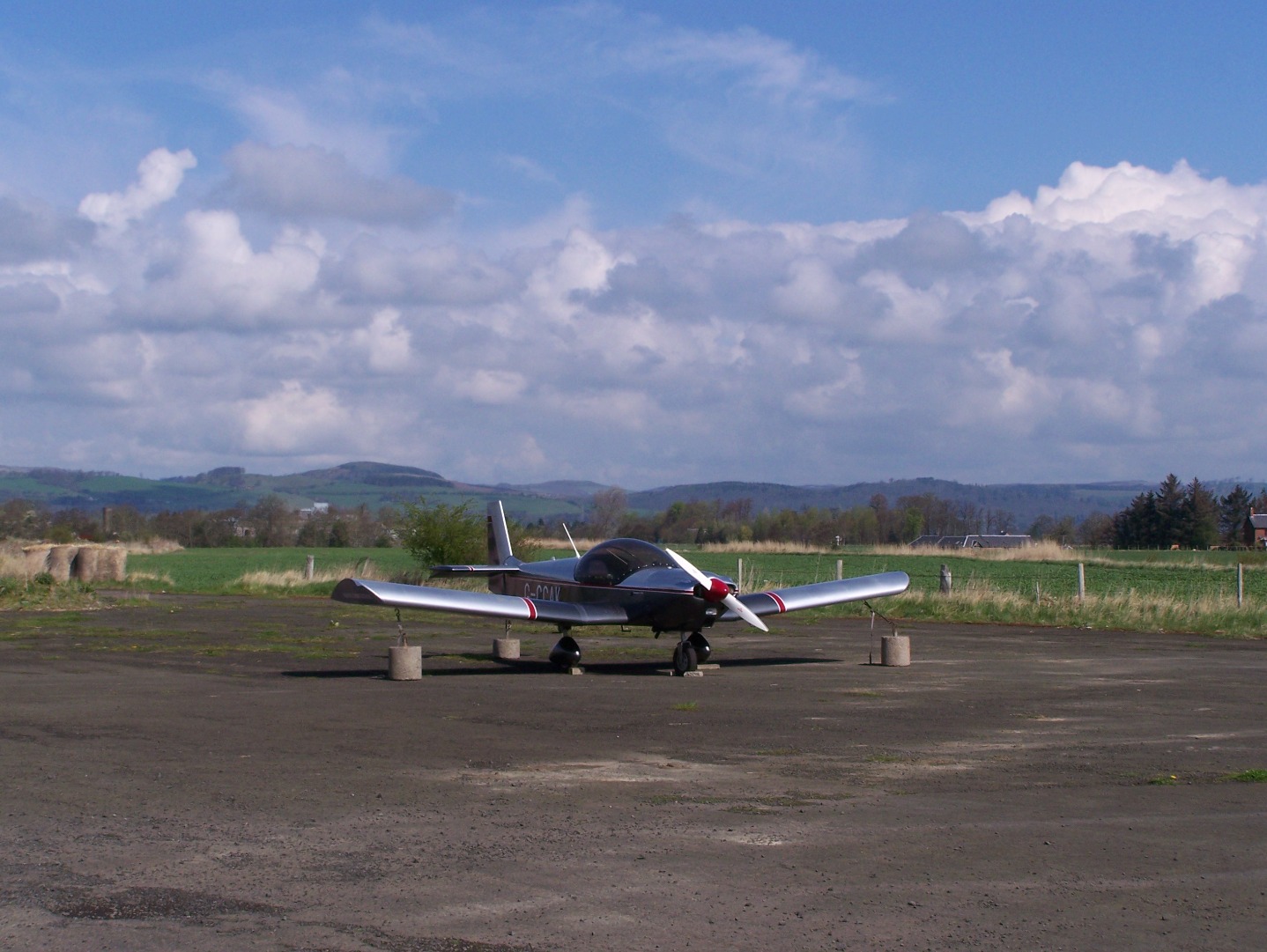 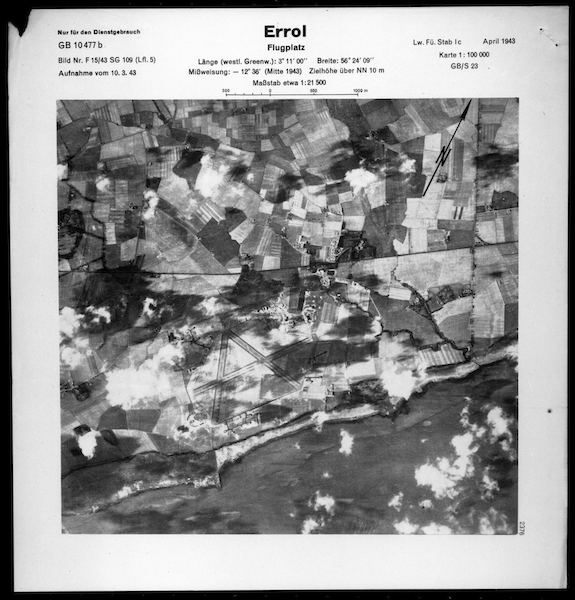