Distinctively positioned near the edge of a peninsula, west of Pembroke, Angle was originally designed as a fighter airfield for convoy escort patrols. No 32 Squadron and its Hawker Hurricanes immediately began operating from here once the airfield opened on 1 June 1941. Despite their new home lying incomplete for months afterwards, various other fighter squadrons arrived until February 1943 to occasionally see action to good effect. They primarily used Supermarine Spitfires but also Westland Whirlwinds of No 263 Squadron which stayed between April and August 1942.

A large part of 1943 proved comparatively quiet for Angle, even once it transferred from RAF to Royal Navy control as HMS Goldcrest in the spring. This was however in some respects always envisaged as a temporary measure involving nearby Dale. In September of that year the RAF and Coastal Command Development Unit (CCDU) changed places with Angle for its neighbour across the water to become HMS Goldcrest instead. Now a completely different form of activity occurred as a wide variety of aircraft types proceeded to carry out service trials of equipment such as especially air-to-surface (ASV) radar to assist Coastal Command operations. For all its remoteness and associated disadvantages, this airfield undoubtedly played a major part in successfully combating the U-boat threat for most of the remainder of World War Two.

One cannot mention Angle without also highlighting the events of 29 May 1943 when a Short Sunderland had to make a remarkable emergency landing here after suffering heavy damage to its hull and hence being unable to land on water back at famous marine base Pembroke Dock. All captured on film, thus arose the first ever ‘dry’ airfield flying boat incident in Britain, only equalled by another Sunderland at Jurby in the Isle of Man in May 1945.

Four months earlier CCDU had departed from Angle for Thorney Island to expand and become known as the Air-Sea Warfare Development Unit. The airfield remained as satellite to Pembroke Dock but only on a Care and Maintenance basis, and the War Office gradually took charge of the site for Army use between September 1945 and July 1946 when it gained full control. Historical details after this time are poor to say the least, and a claim that Angle returned to being an airfield in the 1950s for Fleet Air Arm use as an RLG for Brawdy is erroneous. By 1953 the airfield however still remained parented by Pembroke Dock on an inactive basis but then was soon relinquished.

Sadly many years later Angle was virtually wiped out physically and now hardly anything is left of the site, with the landing area only really visible from the air. The airfield is remembered to a slight degree in commemorative ways but precious little in terms of wartime traces have survived. 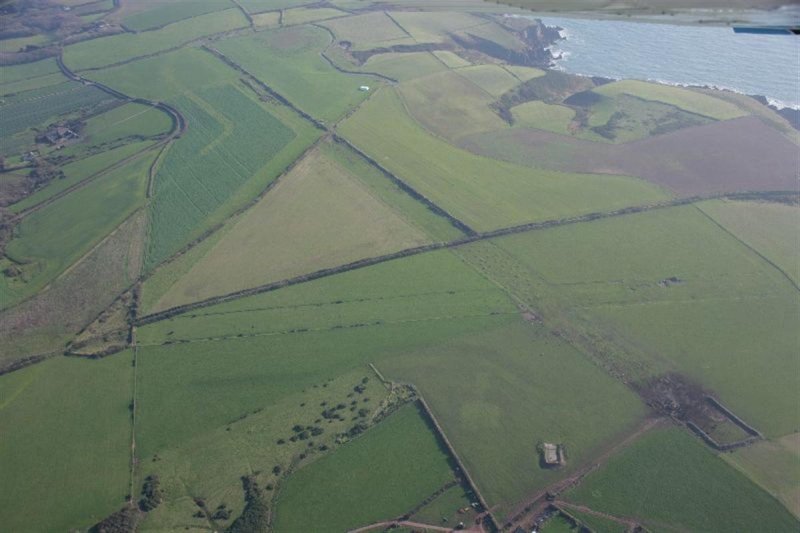 Aerial photograph of Angle airfield from the north-west by Toby Driver, 19 November 2005. © Crown copyright: Royal Commission on the Ancient and Historical Monuments of Wales.

A Shorts Sunderland crash landing at Angle in 1943. Courtesy of vickichapel