Sumburgh, now the main airport for the Shetland Islands, also began life in a similar capacity. The first landing at the site was on 19 April 1933 but the first scheduled service did not begin until 2 June 1936 when an aircraft from Aberdeen Airways landed. Allied Airways began operating a regular airmail service from November 1937.

With the Second World War commencing the RAF gained the airfield in 1939. Gloster Gladiators arrived in December to form a Fighter Flight to provide defence for the islands, leaving in July 1940 for Roborough to form No 247 Squadron. Three tarmac runways were completed that year, with Bristol Blenheims of No 254 Squadron soon arriving as a Station HQ arose in May. Many fighter units subsequently arrived for various periods, especially as detachments. These came from many airfields, notably Grimsetter and Skeabrae, primarily with Hawker Hurricanes and Supermarine Spitfires but also Fleet Air Arm Hawker Sea Hurricanes from No 880 Squadron briefly. Two airmen were killed during a Luftwaffe attack in February 1942.

In addition, squadrons from Sumburgh carried out offensive missions against enemy maritime targets. Blenheims, Bristol Beauforts and Beaufighters, Handley Page Hampdens and de Havilland Mosquitoes were among the aircraft to carry out these operations, flying from the airfield during short stays as frequently occurred with RAF units here. This general rotation of units continued well into 1944. No 1693 (General Reconnaissance) Flight moved in the summer of 1944, providing anti-submarine cover with Avro Ansons until moving to Docking in the spring of 1945. A detachment of No 598 Squadron also carried out target towing from the site towards the end of the war.

The airfield was reduced to Care and Maintenance status in August 1945 after closing the previous month. However, civil aviation took over at the airfield on 2 October 1945 and the airfield passed to Ministry of Civil Aviation Control on 1 August 1946 for its original role as a civil airport. British European Airways were the first to begin services with Douglas Dakotas. In 1966 the main runway was extended and an extension of a second runway followed in the mid 1970s. At this time it was the fastest growing airport in the UK due to increasing oil industry traffic, this peaked in 1978 with 51,000 aircraft movements and 685,000 passengers. Longer-range helicopters afterwards contributed to a decline in traffic. A new terminal building was also opened in 1979. Further runway extensions were completed in 2005 to allow larger aircraft to operate from the airport, which is run by Highlands and Islands Airports Limited.

Some Second World War buildings can still be seen throughout the airport, although all the wartime hangars have been removed. The control tower has been substantially modernised. Surrounding hills and poor weather conditions have always proved adverse factors but Sumburgh has always managed to successfully overcome these potential problems. 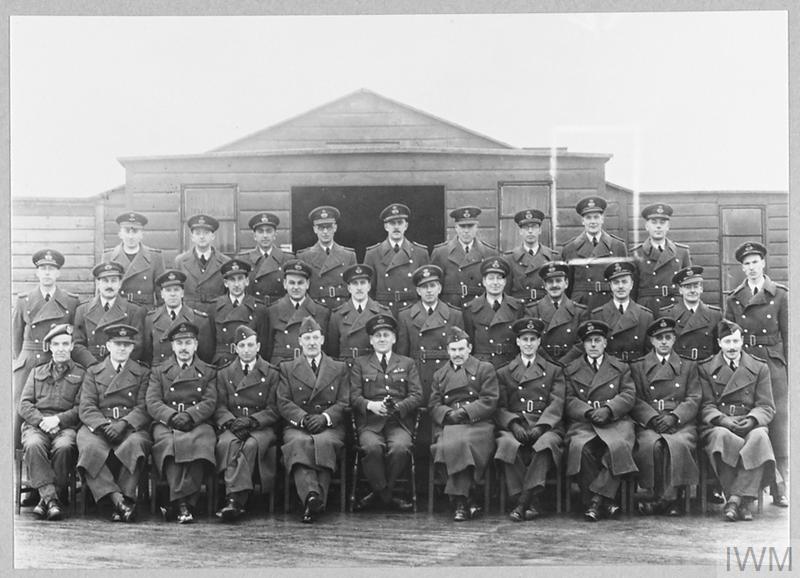 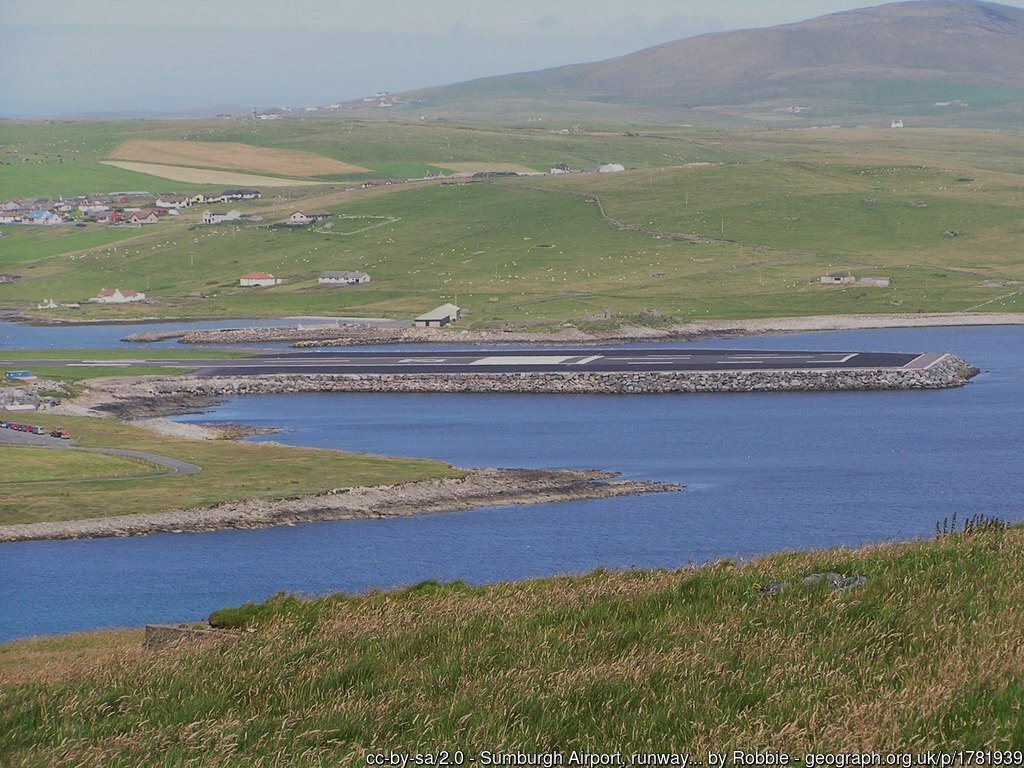 The runway extension at Sumburgh, 6 August 2006. 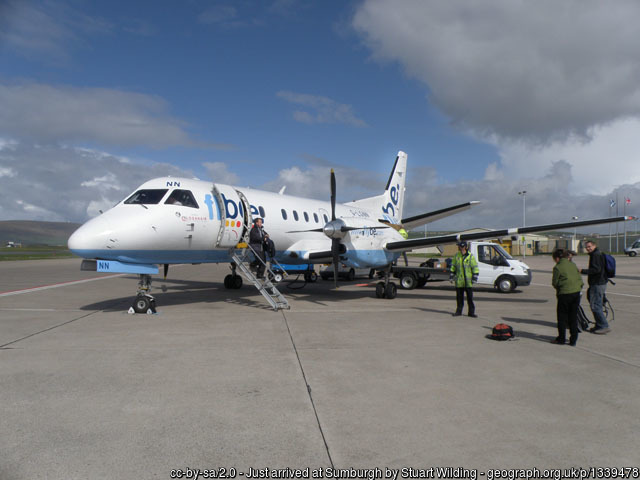 A Flybe aircraft just landed at Sumburgh from Aberdeen, 9 May 2009. 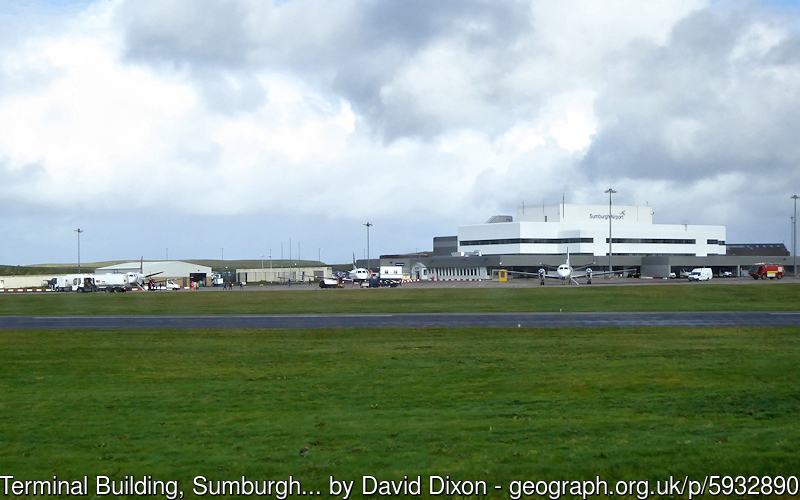 The terminal building at Sumburgh, 20 September 2018. 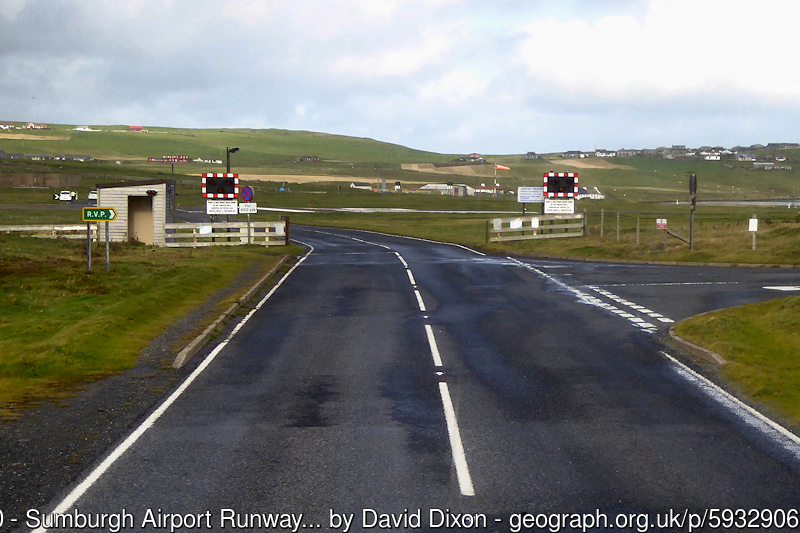 Footage of Sumburgh, 1980. Courtesy of grebrynod