Built on Melbost Golf Links in the 1930s for civil flying after being identified by Ted Fresson, the original grass runways are said to have been the first defined examples in Britain. Airfield plans had existed as far back as 1934 but development delays with the golfing authorities and licensing problems among other difficulties meant that by the time the airfield was completed war had broken out and the site was soon acquired by the Air Ministry.

Although a Scottish Airways Glasgow-Hebrides airline service did start in May 1940, from especially 1941 throughout the rest of World War Two military operations predominated. Construction personnel in time built four hard runways in an unusual layout to fit into the available land. One runway proved very short but the long main runway was a requirement of Coastal Command, whom the airfield was designated for. Fleet Air Arm Fairey Albacores serving under No 18 Group of Coastal Command were there from March to May 1941 for anti-submarine patrol and convoy escort tasks. No 48 Squadron’s Avro Ansons and later Lockheed Hudsons arrived on detachment in July to carry out maritime patrols, but left in October.

Nos 500 and later 502 Squadrons completed more maritime patrols with Hudsons and Armstrong Whitworth Whitleys for four months in 1942. No 303 Ferry Training Unit became another element to have a brief stay at Stornoway, from the end of 1942. The airfield’s location made it ideal for aircraft from North America to use when travelling to the UK, with US personnel being based here to handle these transits. From November 1943 the airfield was put under the control of No 44 Group in association with this aircraft movement role.

Important meteorological flights by No 518 Squadron had also taken place from Stornoway for a few months in 1943, providing knowledge of the weather that was especially vital for the planning of bombing missions. Operational units returned in 1944, most significantly Nos 58 and 502 Squadrons for more anti-shipping missions until disbanding in May 1945.

Only in May 1944, ten years after an initial proposal, had a Scottish Airways airliner link begun between Stornoway and Inverness. With control handed to the Ministry of Civil Aviation in 1946 for development as an airport, military use was quickly scaled down. The airfield was however still used as a staging post by military aircraft and from 1973 strike, maritime patrol and fighter aircraft were among those deployed at what became an important NATO forward operating base once rebuilding occurred during the early 1960s. No 112 Signals Unit, an electronic countermeasures measurement and evaluation unit, was based here from 1960 until 1983 at the height of the Cold War.

Improvements to the main runway, taxiways and infrastructure in the early 1980s allowed Panavia Tornadoes to operate from the airfield. The forward operating base role continued until the military section of the airfield finally closed in 1998. Stornoway Airport is now used for domestic flights by Loganair and Royal Mail. Bristow helicopters also carry out search and rescue operations from the airport, although this civil service only belatedly began in 1987. Highlands and Islands Airports run the site on behalf of the Scottish Government. Various military buildings survive and although only two are now used, all four runways are intact. 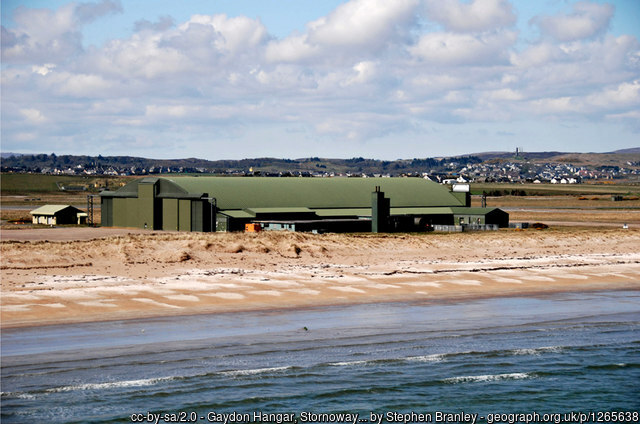