The main runway of the airfield is now confirmed to have appeared at the start of the introduction to legendary and hugely admired and analysed TV series 'The Prisoner'.

The land which became Podington was approved for requisition in July 1940 and construction work was needed long after it finally opened in August 1942. Various American units used it for short periods of time over the next year or so during which time the runways had to be lengthened significantly. Far more settled used came in September 1943 when the 92nd Bomb Group came from Alconbury. This element won a Distinguished Unit Citation while at Podington and had a quite eventful time at the base until the end of WW2. On 20 May 1944, for instance, two of its Boeing B-17s collided on the runway in poor visibility and left 21 people killed and badly damaged the runway. In early 1945 the group also operationally tested examples of the Disney bomb, an unusual weapon which had a rocket fitted in its tail to increase speed.

The 92nd BG moved to France in July 1945 and Podington passed quickly to RAF control; several Airfield Construction Squadrons stayed there until the airfield passed to War Office ownership in January 1947. Loose military control continued throughout the 1950s and it was home too to a Polish resettlement camp. There was limited civil light aircraft and gliding activity until the end of the 1960s but that decade proved more memorable for the emergence of what is today known as Santa Pod. Opened in 1966, it remains Europe's top dragster racing circuit.

Today the control tower is now a house and some other airfield buildings remain. Notably there is a piece of preserved wall art from the airfield featuring a B-17 at the Imperial War Museum at Duxford.

Video and photographs from the Podington airfield marker unveiling on 26 May 2013:
Video taken by John Walker of the 92nd Bomb Group. 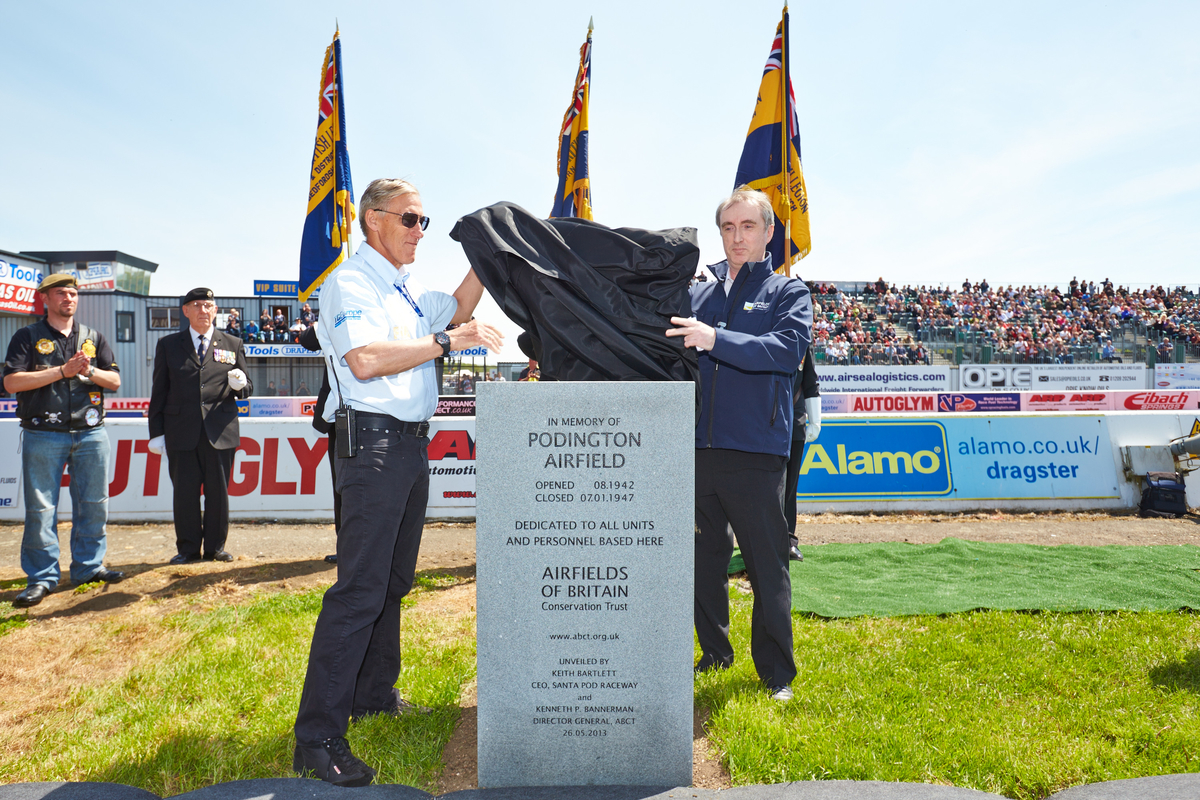 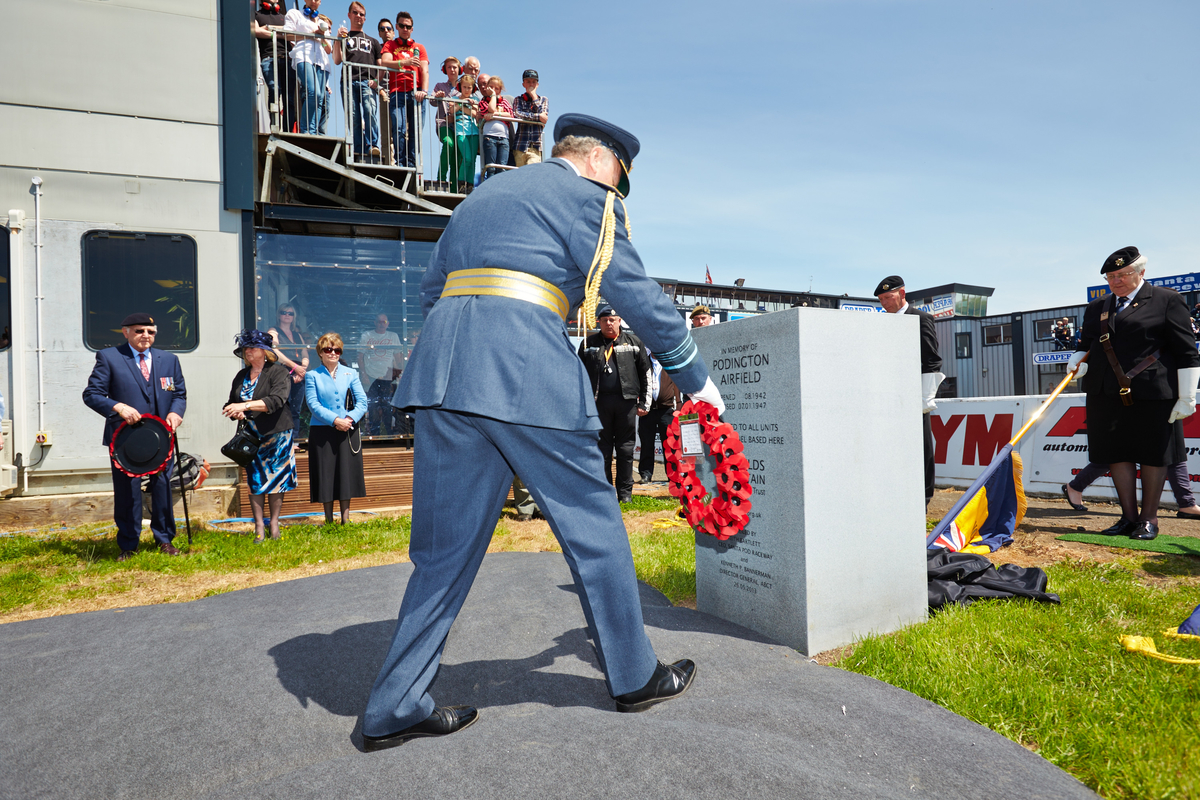 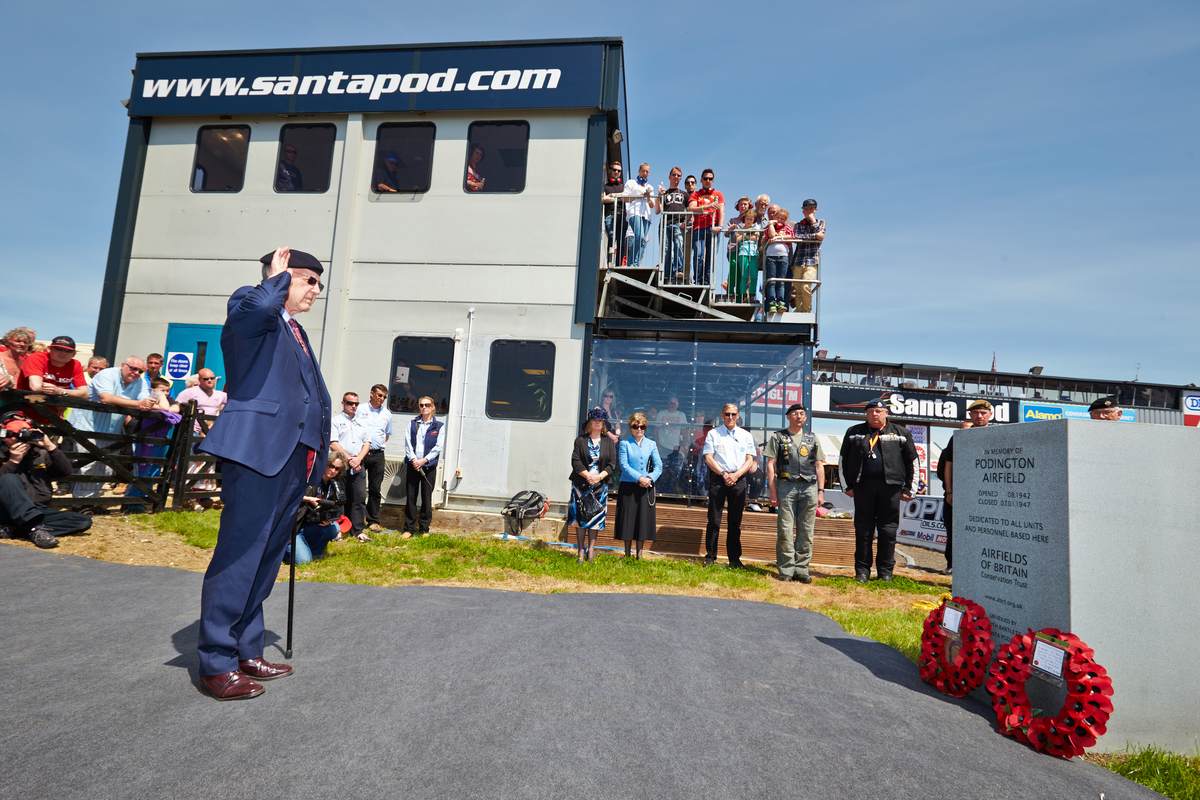 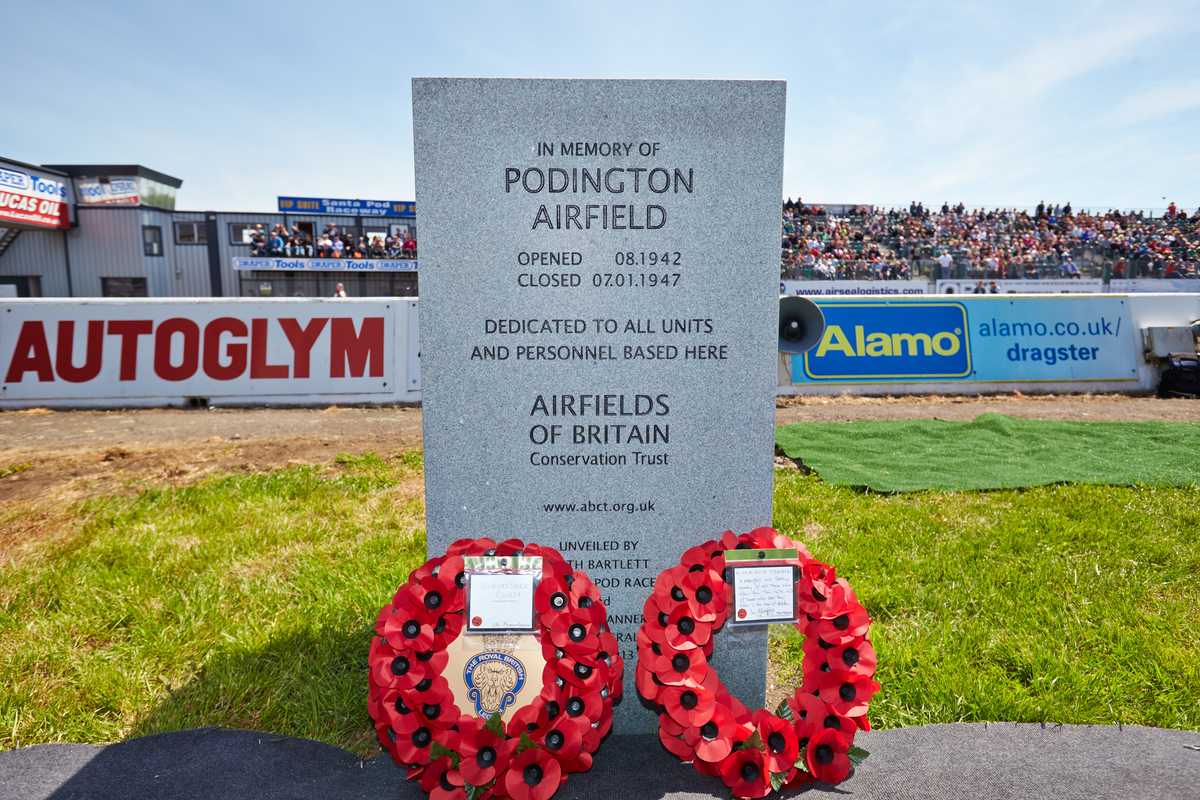 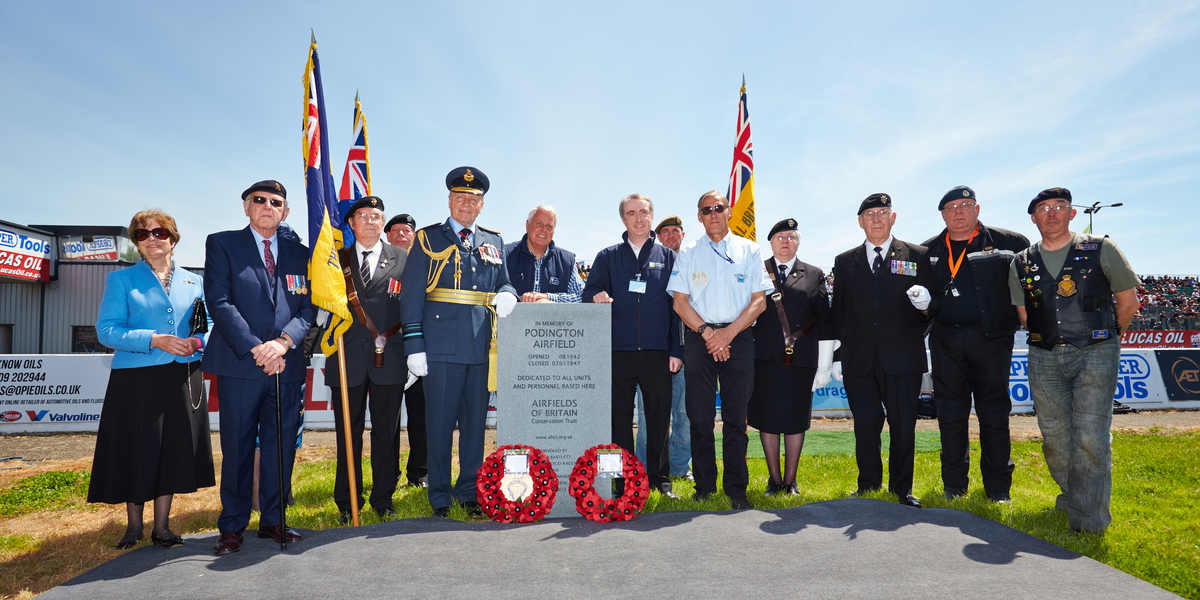 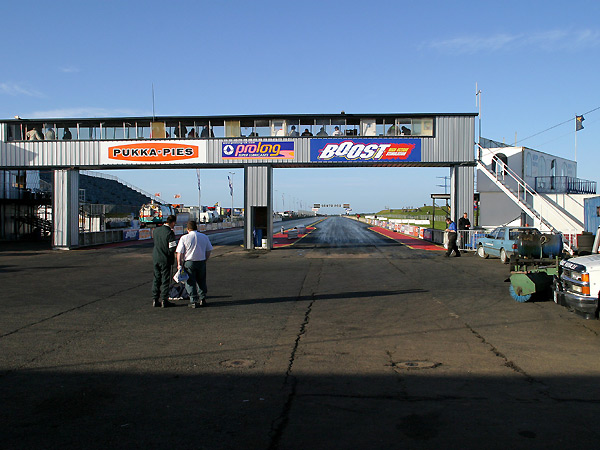 The dragstrip at Santa Pod Raceway looking south-west, 12 September 2003. © Chris Plunkett and licensed for reuse under this Creative Commons Licence 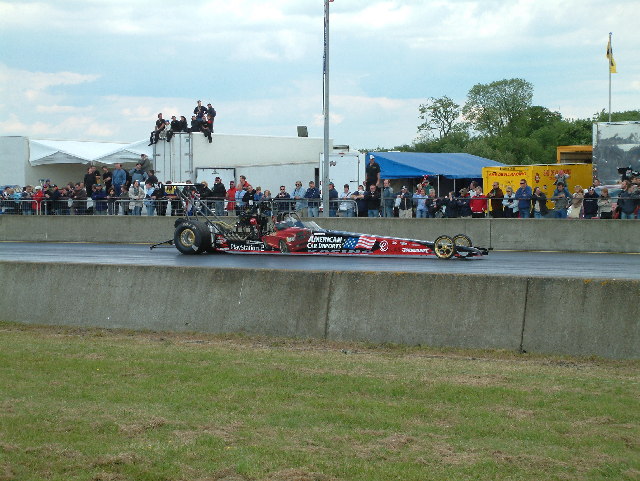 Drag racing at Santa Pod Raceway, 30 May 2005. © Ian Knox and licensed for reuse under this Creative Commons Licence 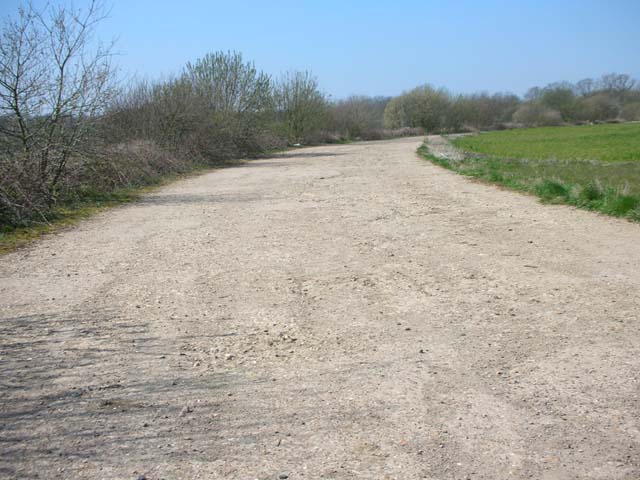 A former taxiway looking north-west at Podington, 5 April 2007. © Will Lovell and licensed for reuse under this Creative Commons Licence 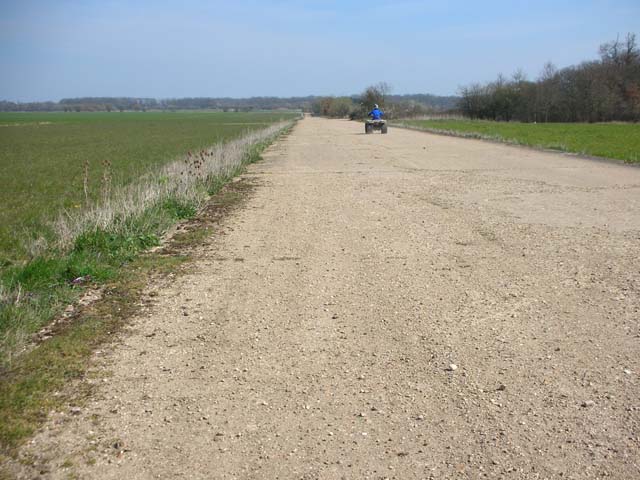 A former taxiway looking east at Podington, 5 April 2007. © Will Lovell and licensed for reuse under this Creative Commons Licence 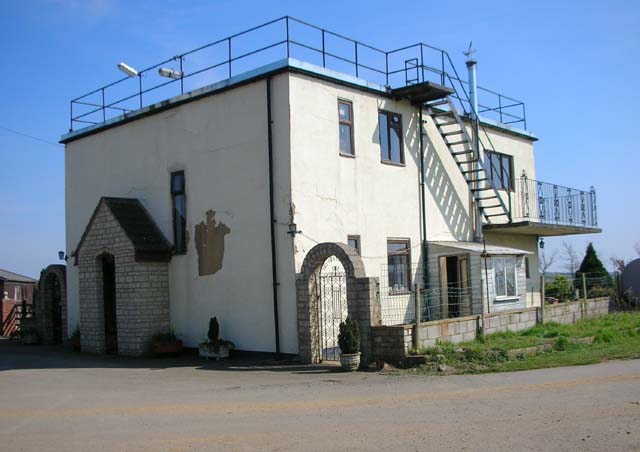 The former control tower at Podington, now a house, 5 April 2007. © Will Lovell and licensed for reuse under this Creative Commons Licence 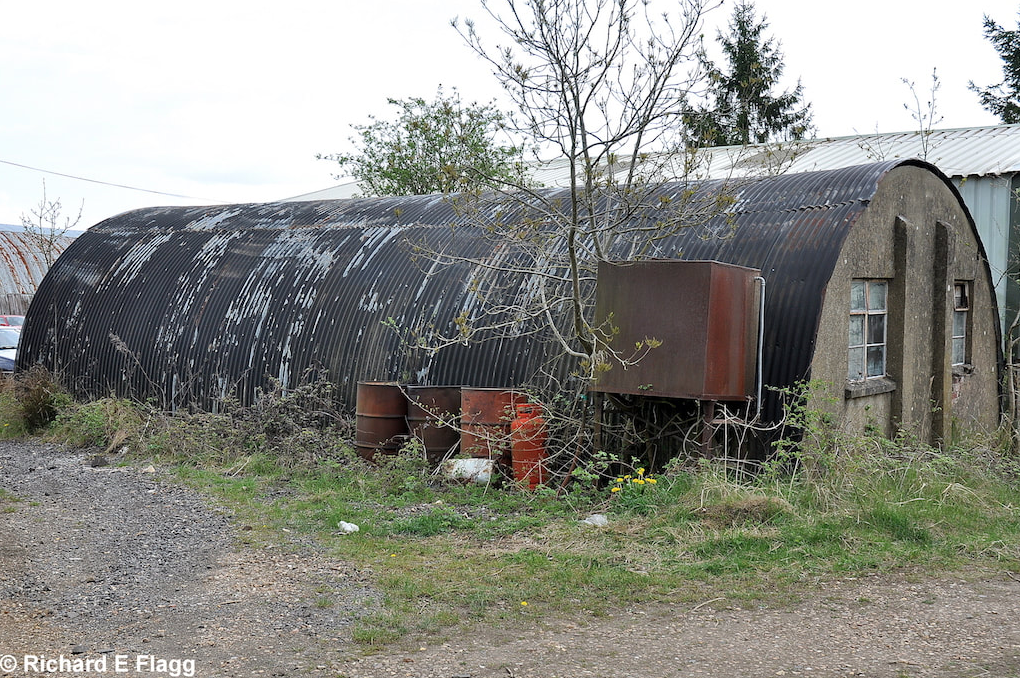 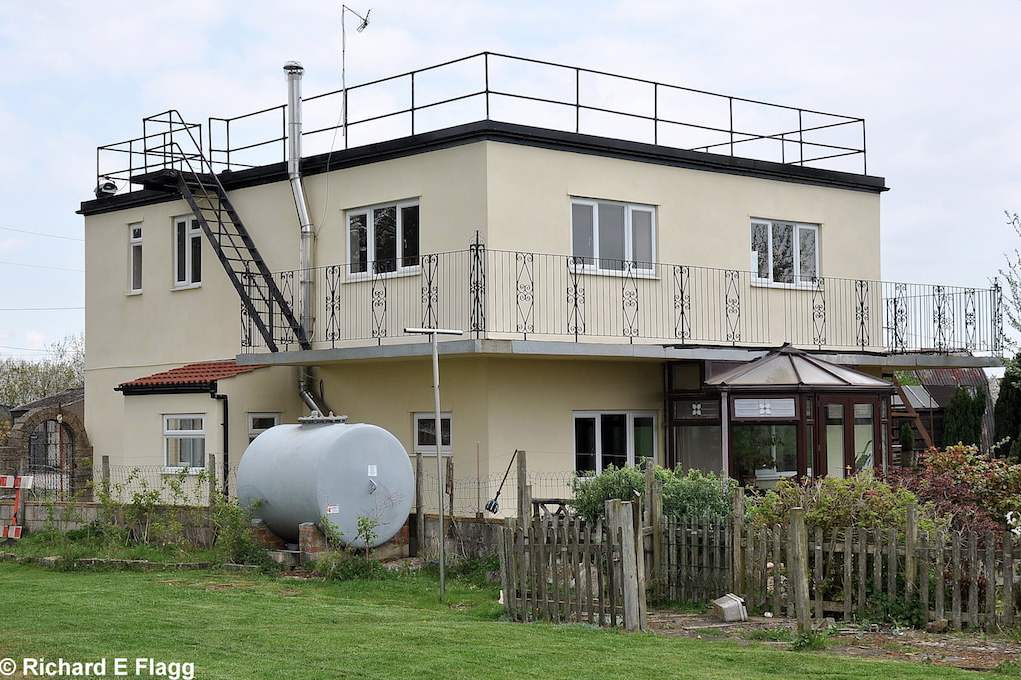 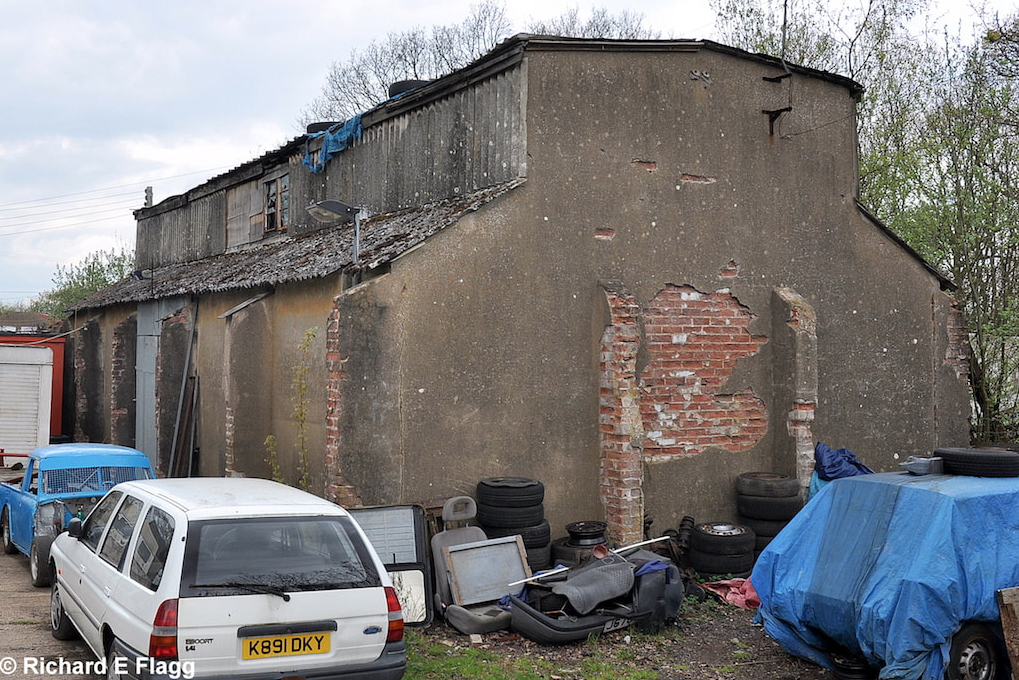 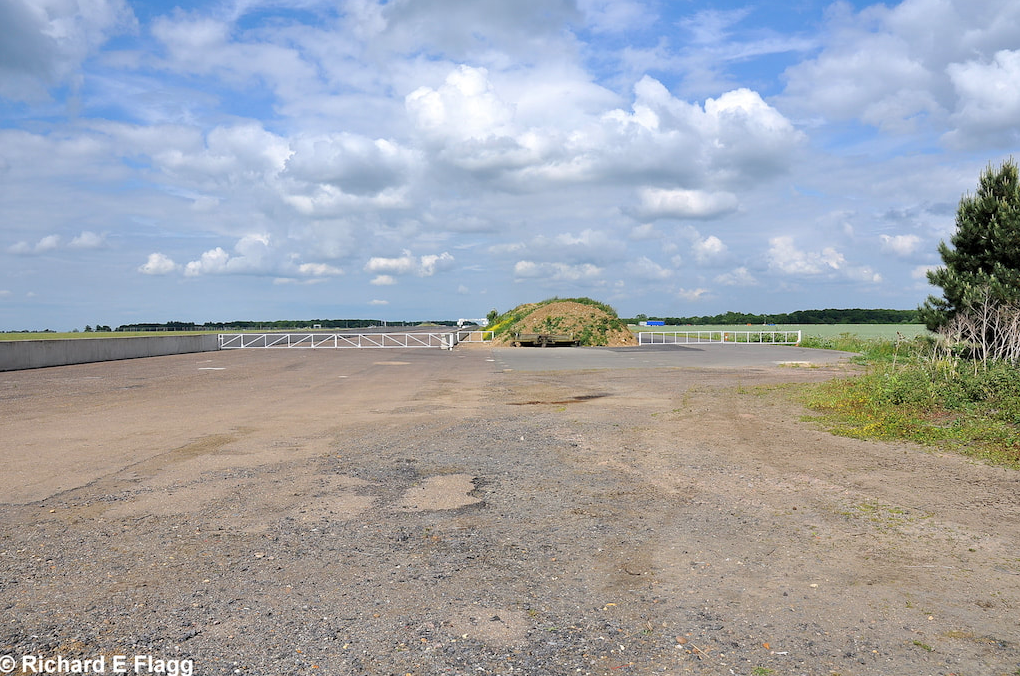 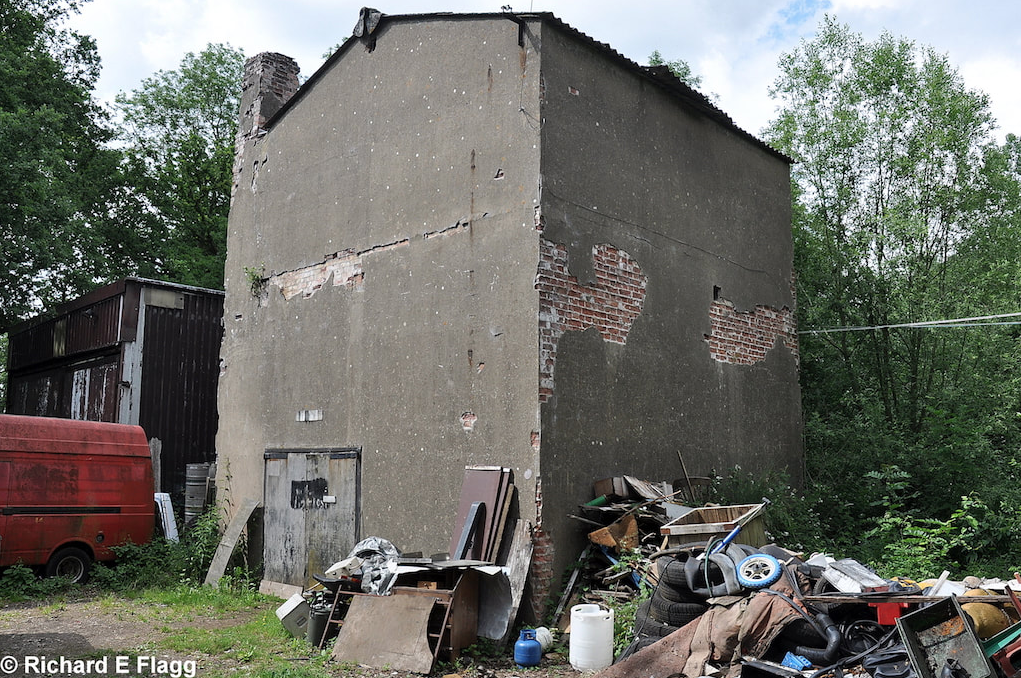 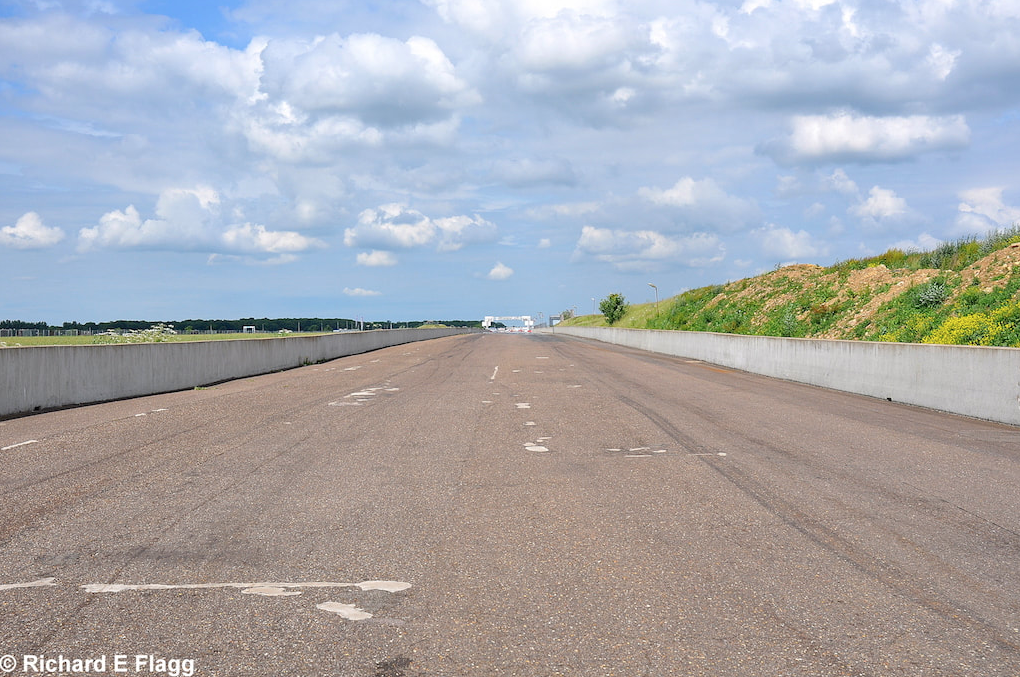 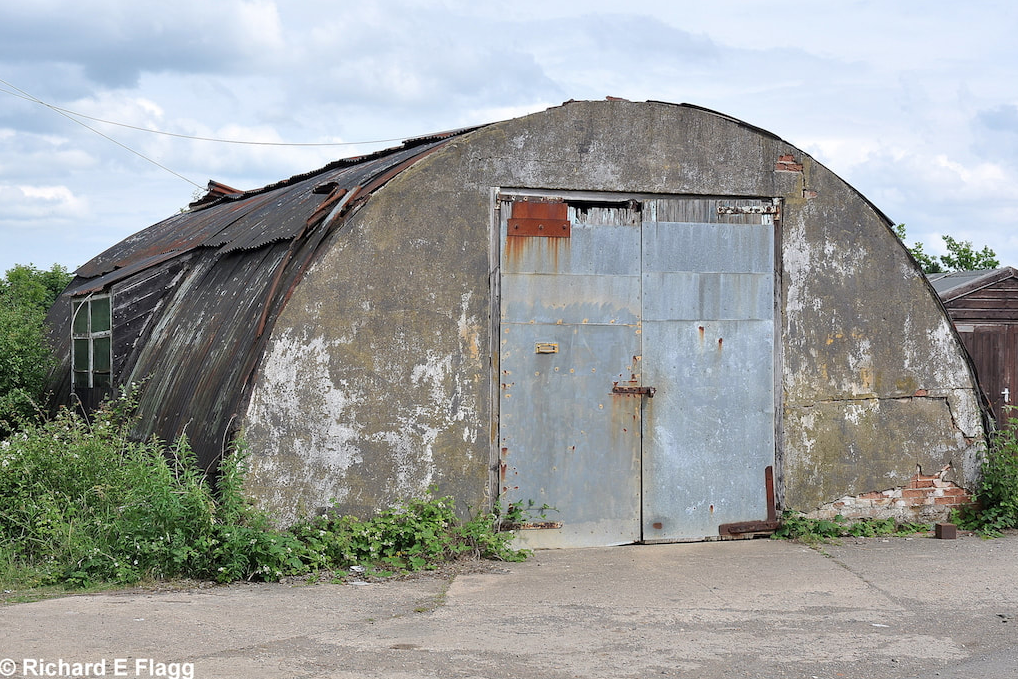 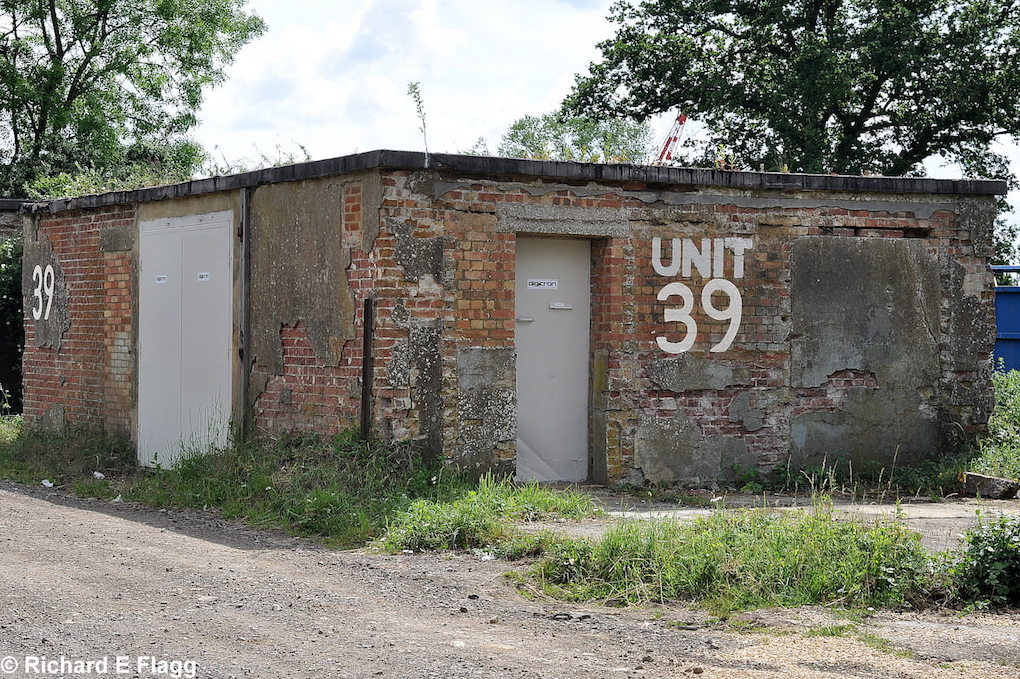 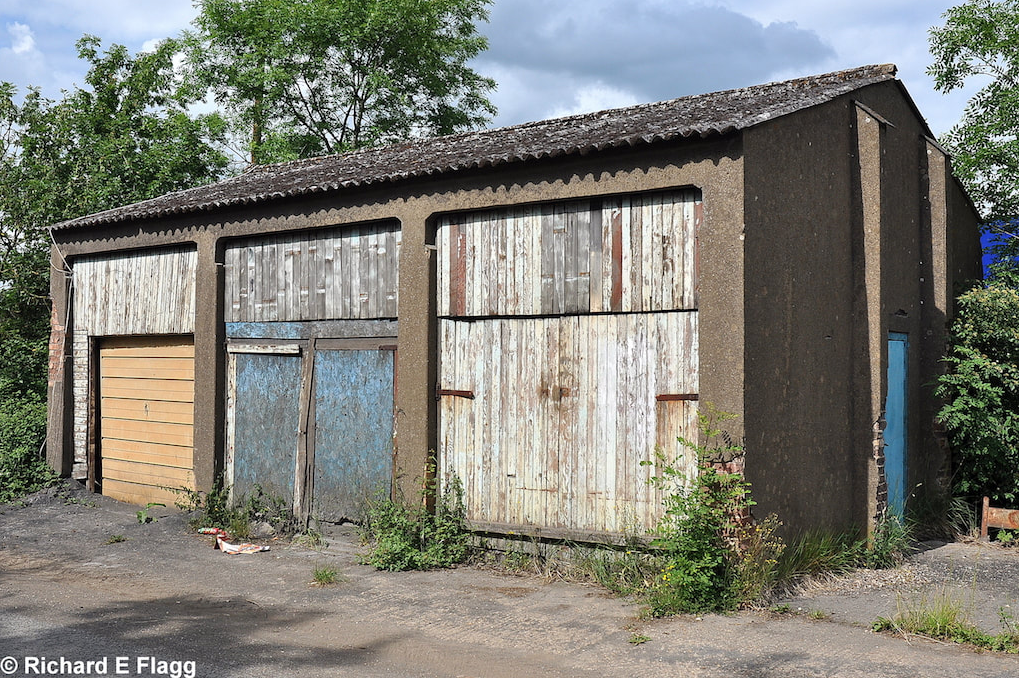 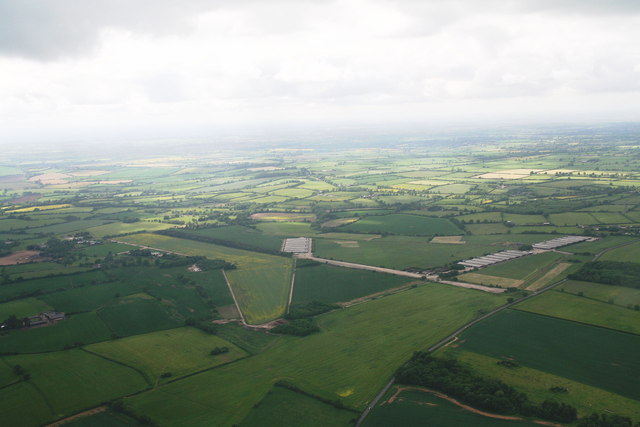 Aerial view of Podington, 16 June 2013. © Chris and licensed for reuse under this Creative Commons Licence

Footage around the control tower, 1944. Courtesy of TOPCAMERAMAN

The 92nd Bombardment Group, USAAF, at Podington during the Second World War. Courtesy of TOPCAMERAMAN

American aircraft at Podington during the Second World War. Courtesy of TOPCAMERAMAN

Racing at Podington and Elvington, 1968. Courtesy of Nick Pettitt