Sir Hall Caine (1853-1931) was an extremely famous novelist in his day and rated so highly that many compared him to Charles Dickens. Yet his fame rapidly dwindled following his death and he is now hardly remembered even in the Isle of Man, let alone anywhere else.

Named after the once world famous but sadly now completely forgotten Manx author, Hall Caine was the Isle of Man’s first airport and the brainchild of his two sons Derwent and Gordon. Following the death of their father in 1931, a nearby landing ground at Close Lake to the west of Ramsey began to take shape and was active to an extremely limited degree as a private landing place by 1934. The brothers however envisioned that this location could become an airport to provide a genuine public service to the island and established Hall Caine as such in the spring of 1935.

Several airline companies such as Northern and Scottish Airways and United Airways successfully mounted services to the airport in the mid-1930s from other airports including Blackpool (Stanley Park) and Glasgow (Renfrew) but 1937 proved a particularly difficult year for Hall Caine for a variety of reasons. Some of these purely for business reasons, though its location at the north end of the Isle of Man away from the main town of Douglas did not help matters. The airport therefore in all but name ceased to be in the autumn of 1937, only a few visiting aircraft appearing after this time until the start of World War Two.

Shortly into the conflict Hall Caine was militarily requisitioned in order to support the new RAF training airfield of Jurby. What available records remain do not go into any great detail but it did serve in a supportive capacity until being finally derequisitioned at the start of 1943, as was beginning to be the case with some other parts of land on the Isle of Man around this period. Even then this was not quite the end of this story as the airport company records were steadfastly maintained for years afterwards and only ceased with the death of Sir Derwent Hall Caine in 1971.

Today all that is left of the airfield in situ is a wooden pole and a few foundations. Hall Caine is however more prominent than at first might be thought, as its main hangar now resides at Ronaldsway after two moves and is still used in its originally intended role. The excellent adjacent museum to today’s airport contains artefacts to bring to life the history of what was the first airfield in Britain to be officially named after a person.

Photographs from the ABCT plaque unveiling at Hall Caine on 7 November 2015: 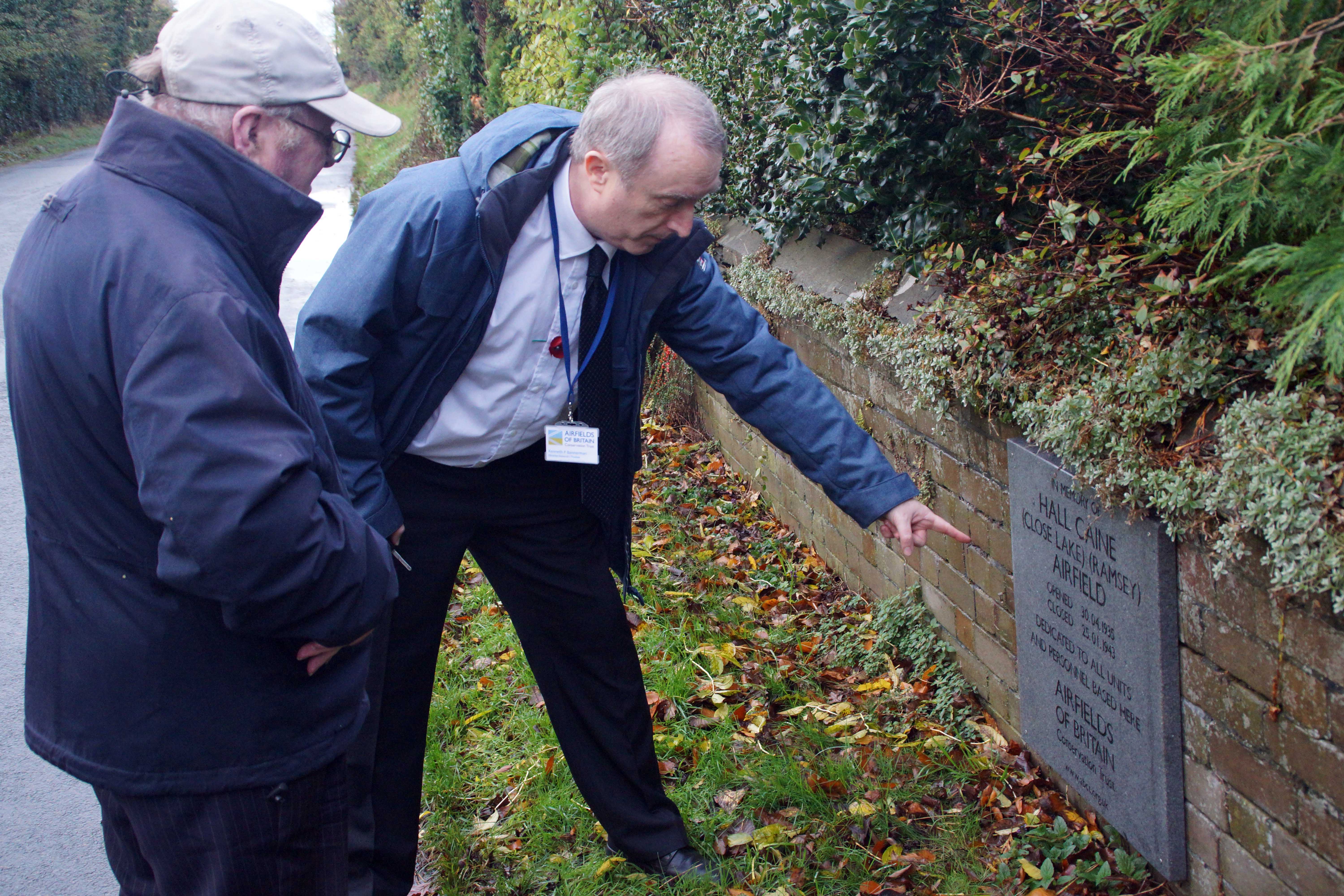 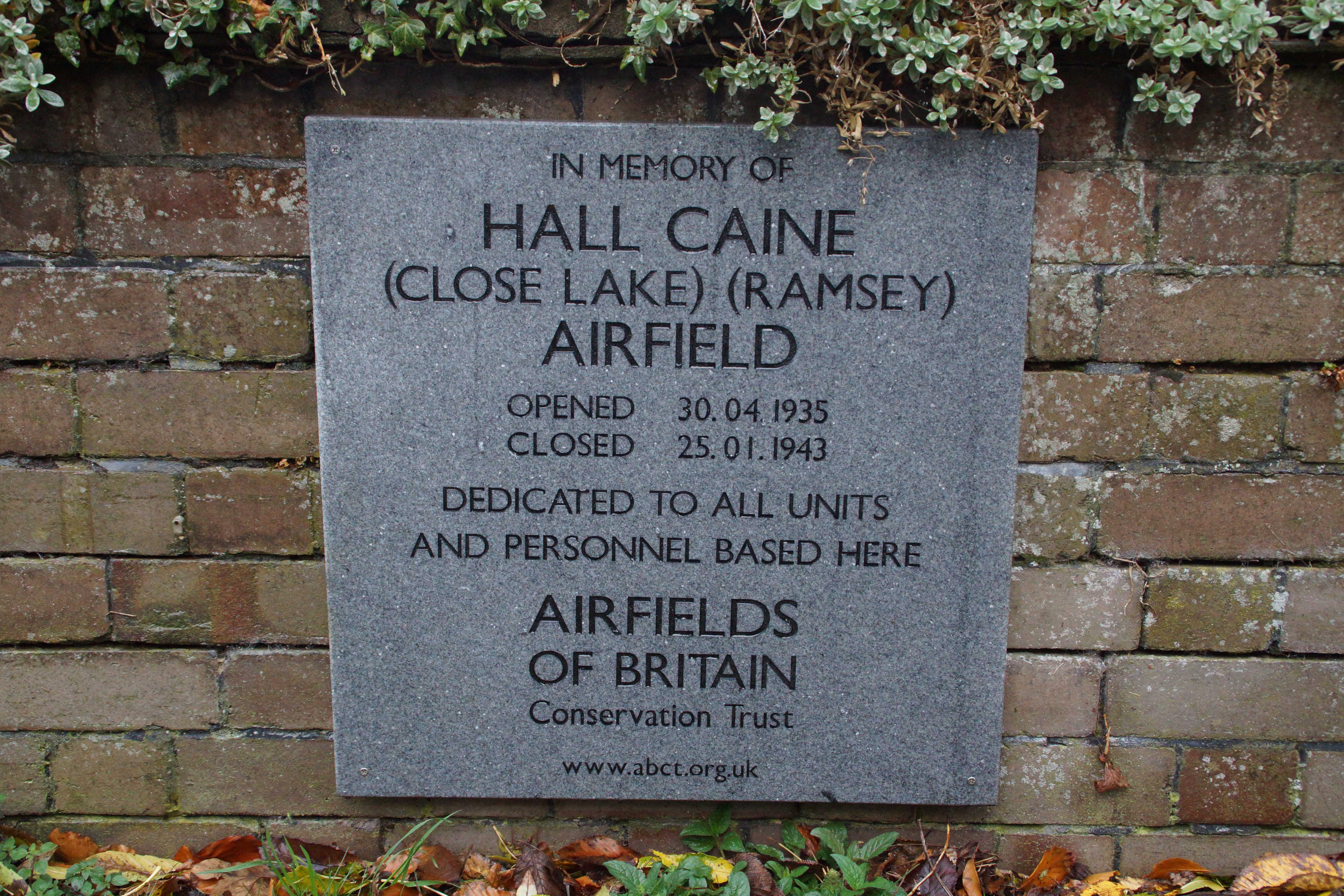 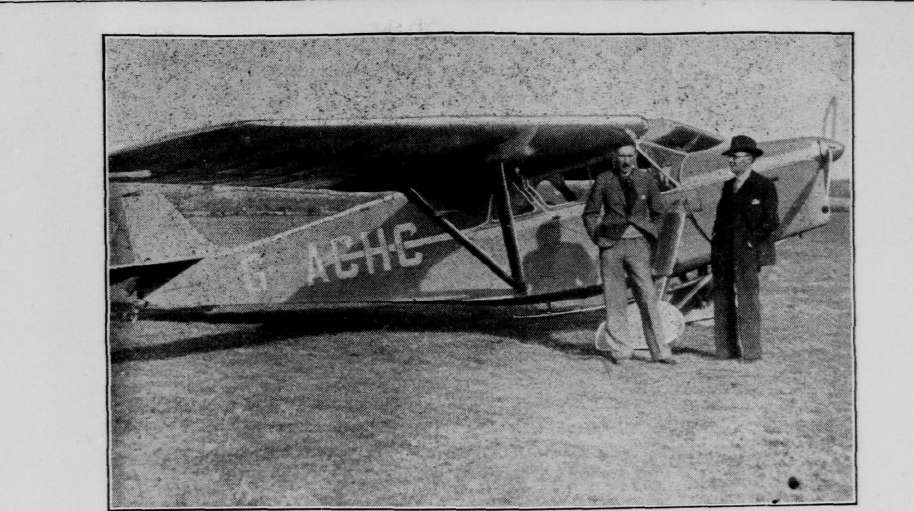 Sir Derwent Hall Caine, one of the sons of the author that the airfield is named after, pictured at Hall Caine Aerodrome in April 1935. Originally from the Ramsey Courier, Friday 12 April 1935. 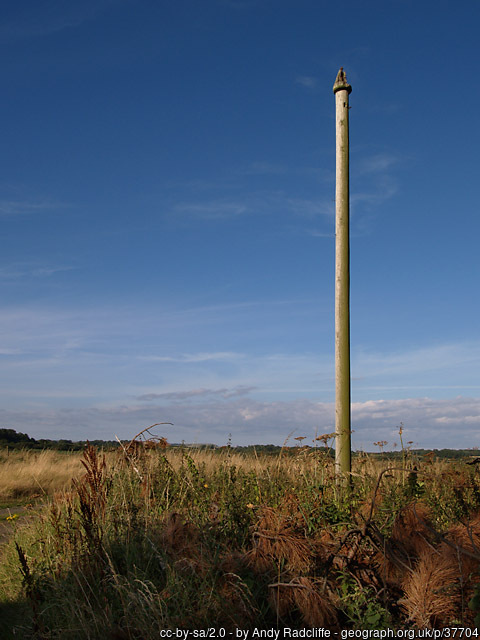