Now Exeter Airport, the land the airfield occupies was first identified by a survey carried out by Exeter Corporation in 1932. After extended discussions over the compulsory purchase of the agricultural land, the airfield opened on 31 May 1937. First commercial airliner to fly from here was a Jersey Airways de Havilland DH.86 and The Great Devon Air Race was held at Exeter in July of the same year. Exeter Airport did not officially open until 30 July 1938 when the first stage of the terminal was completed.

Exeter was used as part of the Civil Air Guard scheme prior to the Second World War. With the outbreak of the conflict, commercial flying as such at Exeter was put on hold and the airfield was handed over to the Air Ministry on 2 September 1939. Improvements were made around the site fairly soon, including three hard runways and new hangars being constructed. The first unit to arrive at Exeter was the Research Department Flight from Farnborough. Fairey Battles were among several aircraft types used to develop wire-cutting devices until the Flight moved to Churchstanton in 1942. The Civilian Repair Organisation (CRO) also used Exeter during the Second World War to carry out maintenance and engineering work.

A major user of Exeter was the Gunnery Research Unit (GRU) that, for nearly four years carried out a large number of important trials. Having officially taken over on 1 June 1940, the RAF transferred control from Flying Training Command to Fighter Command on 6 July. Immediately beforehand Hawker Hurricanes of No 213 Squadron had arrived from Biggin Hill, the first fighters to do so, with more Hurricanes of No 87 Squadron following shortly after. These and other fighter elements provided an important aerial defence of the south-west coast, carrying out coastal patrols and encountering enemy aircraft, and were heavily involved during the Battle of Britain.

Various fighter squadrons subsequently stayed at Exeter from 1940 to April 1944, including units flying Bristol Beaufighter, Boulton Paul Defiant and Westland Whirlwind types. The airfield became a prominent Sector station and oversaw other airfields such as Bolt Head, Charlton Horethorne, Churchstanton and Harrowbeer. Among notable resident squadrons mid-war included the Polish No 307, whose different types of night fighters remained here from April 1941 for the next two years, as well as Czech-manned Spitfires of No 310 Squadron between May 1942 and June 1943. Their home survived an extremely large number of Luftwaffe bombing attacks in the springs of 1941 and 1942, but from 1943 more focus was given to offensive fighter missions. A few Fleet Air Arm squadrons also carried out anti-shipping operations from Exeter in 1942 and 1943.

Exeter had an important part to play in the D-Day landings of 6 June 1944. The airfield had briefly become Station 463 of the USAAF the previous spring, edging out all RAF units, and home to the 440th Troop Carrier Group. Douglas C-47s of the Group based at Exeter carried members of the 101st Airborne Division to France on that vital day. After the Americans finally left that autumn, the RAF regained control of the airfield and it was used by less operationally active units such as the air-sea rescue aircraft of No 275 Squadron. By the end of the war, the main unit based at Exeter was No 3 Glider Training School but it did not last long either and the airfield again returned to Fighter Command’s control in the summer of 1945.

Following the departures of Nos 329 and later 691 Squadrons, Exeter received a Wing comprising an unusual mixture of de Havilland Mosquitoes and Gloster Meteors. Their stay was however cut short when it was instead decided to close RAF Exeter in October 1946 and the site switched back to civilian control on 1 January 1947. Exeter Aero Club and ill-fated manufacturing firm Chrislea Aircraft were among initial users before Jersey Airlines restarted commercial flights in 1952. The RAF also returned to Exeter again with No 10 Reserve Flying School between 1949 and 1954 and No 3/4 Civilian Anti-Aircraft Co-operation Unit (CAACU) operating for 20 years from 1951 to 1971. The CAACU used a variety of aircraft, from Bristol Beaufighters to Hawker Hunters and perhaps most famously Mosquitoes due to their use in various films.

After World War Two Exeter was jointly run under combined military/civilian control for many years. Devon County Council eventually gained ownership of the site in 1974 and remained on the scene until 2007. British Airports International Ltd took over management in 1984 and was known from October 1987 as Airports UK Limited. More improvements to the runways and infrastructure were made from the 1980s onwards. Since Exeter and Devon Airport Ltd took control of operations in 1991 improvements and expansion continued and passenger numbers increased. The wartime layout is still clear despite all the improvement work, with the majority of buildings and technical area to the south of the site. Exeter Airport remains an important airfield for the south-west. Having been taken over by Regional and City Airports (Exeter) Ltd in 2007 from Devon County Council, the airport passed the milestone of handling over 1 million passengers in a year. Since then however, infrastructure firm Balfour Beatty sold its 60 per cent stake in the airport to Rigby Group in early 2013 following financial problems. Passenger numbers fell to a degree around that time but have since recovered. 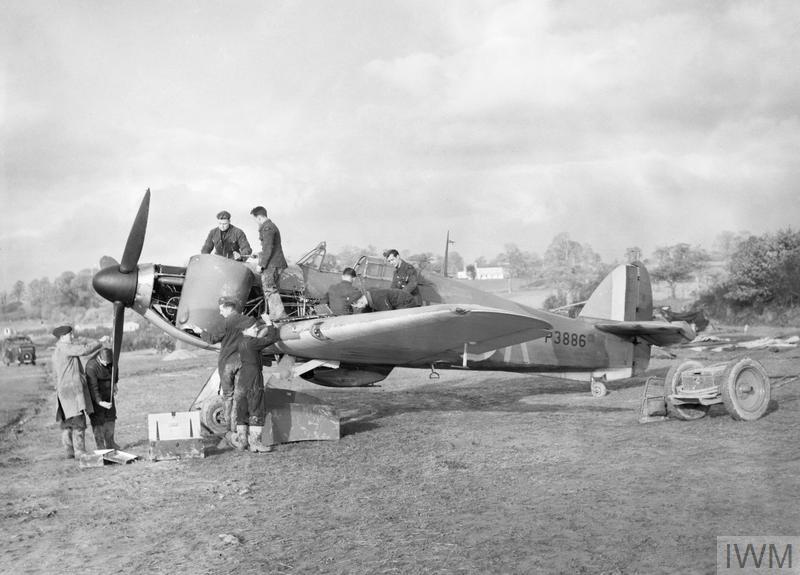 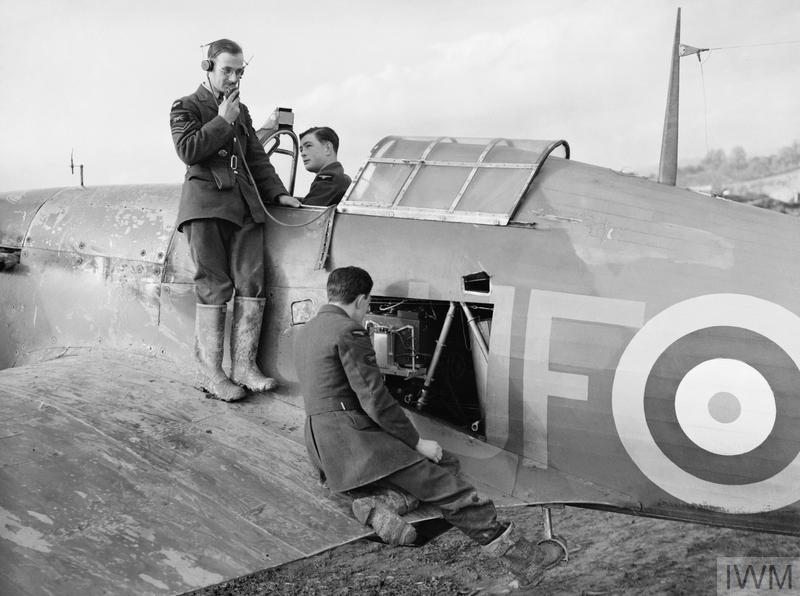 Radio mechanics testing the VHF transmitter/receiver in a Hawker Hurricane Mk I of No 601 Squadron at Exeter, November 1940. © IWM (CH 1636) 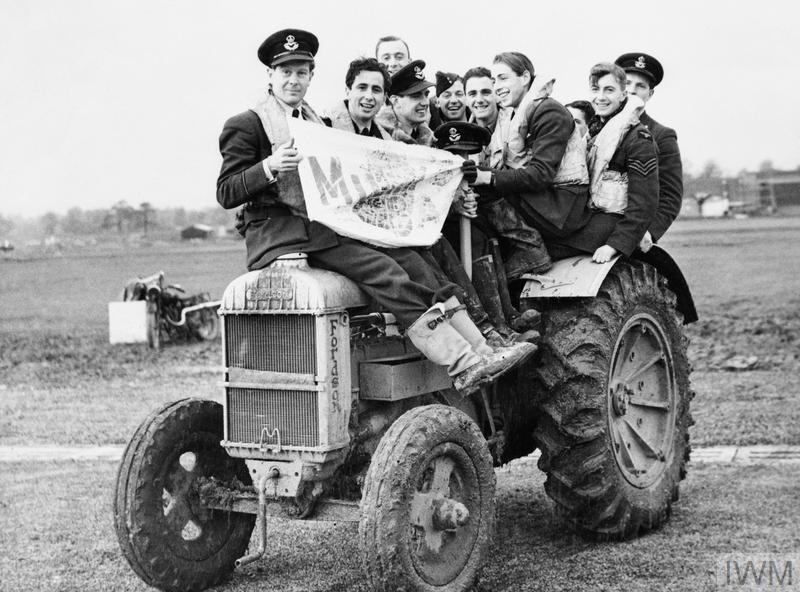 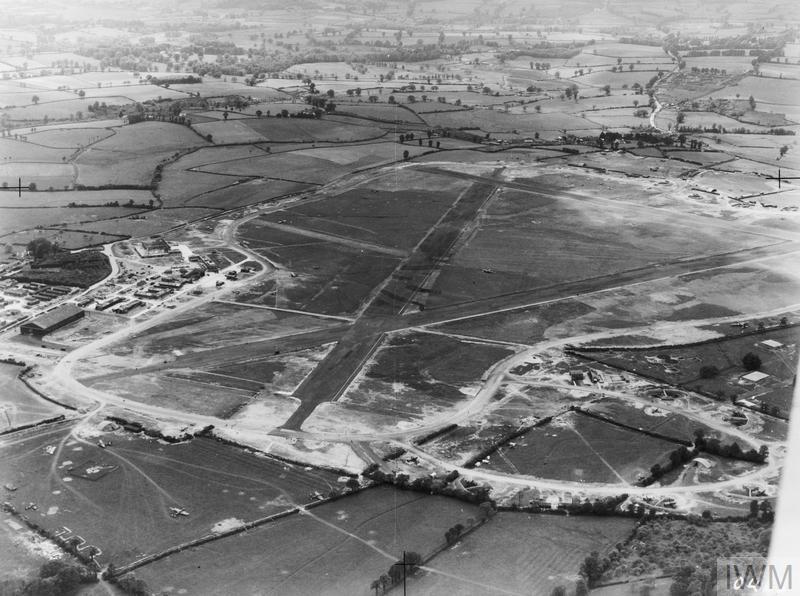 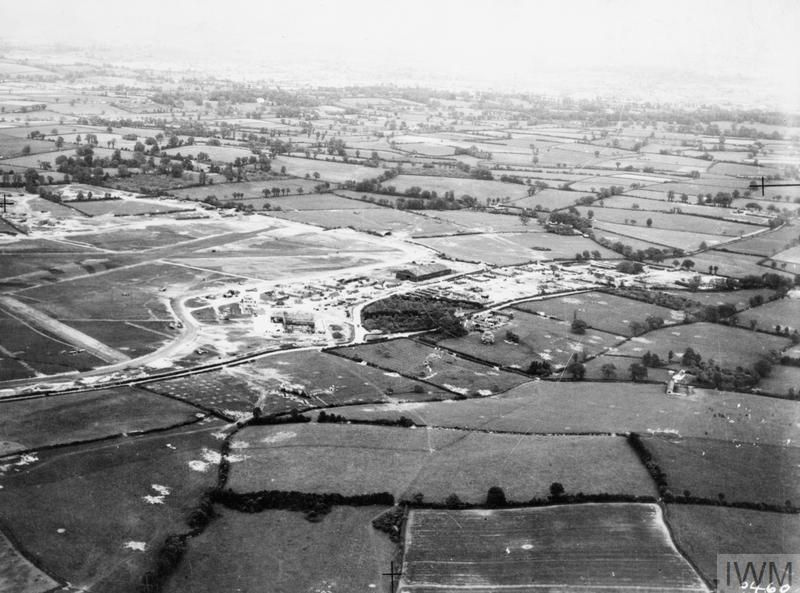 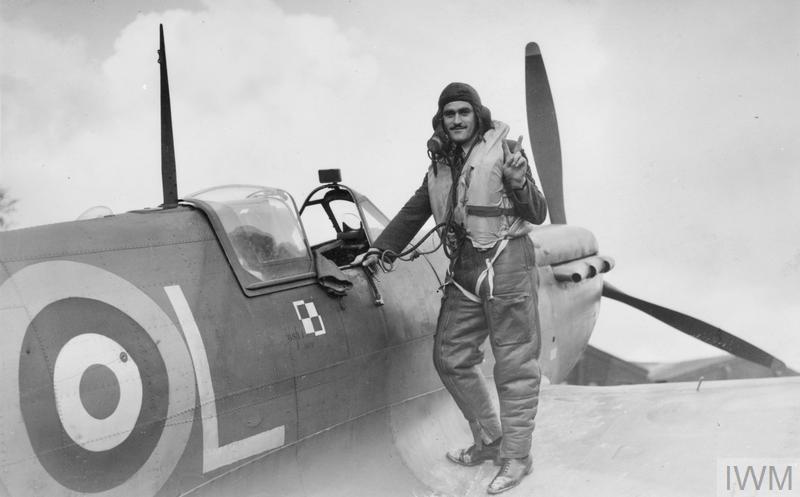 Sergeant Eugeniusz Nowakiewicz of No 302 Polish Fighter Squadron on the wing of his Supermarine Spitfire at Exeter, November 1941. © IWM (HU 86383) 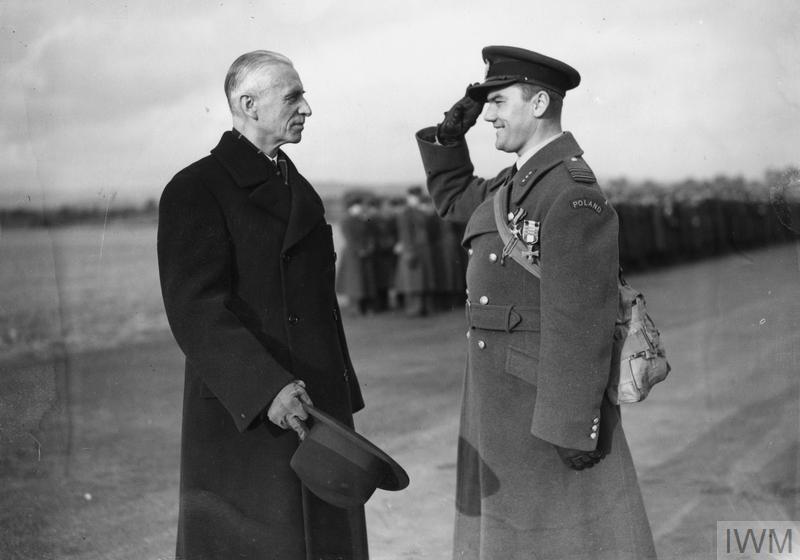 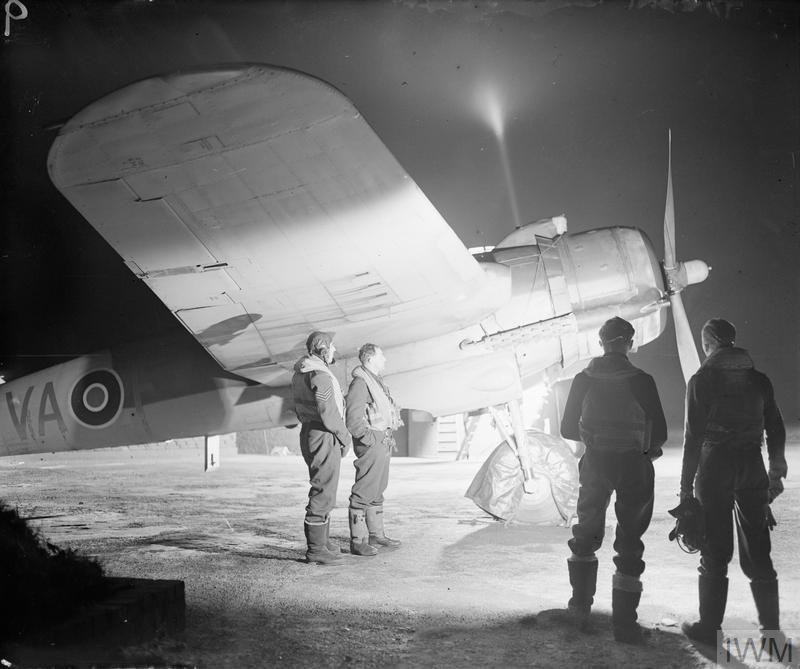 A Bristol Beaufighter of No 125 Squadron being prepared for a night sortie at Exeter during the Second World War. © IWM (CH 11188) 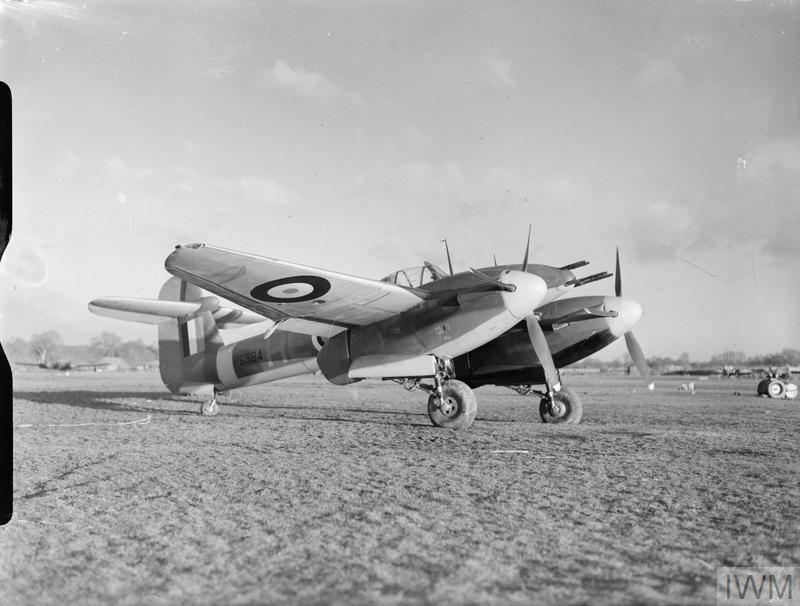 Westland Whirlwind Mark I of No 263 Squadron on the ground at Exeter during the Second World War. © IWM (CH 4997) 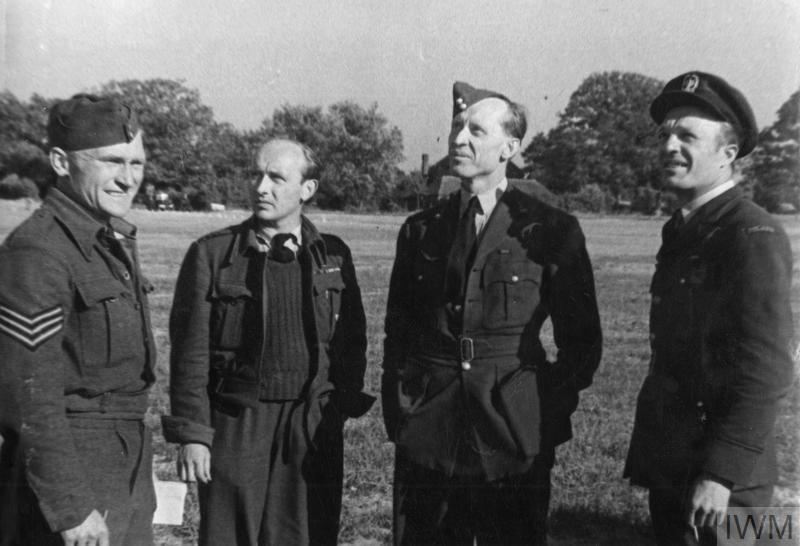 Wing Commander Stanisław Skalski, the Commander of the 133rd Polish Fighter Wing, and Wing Commander Witold Urbanowicz, a Polish Air Attaché in the USA (both in the centre), waiting for aircraft of the Wing to return from a sortie over Normandy at Exeter, 29 July 1944. © IWM (HU 128307) 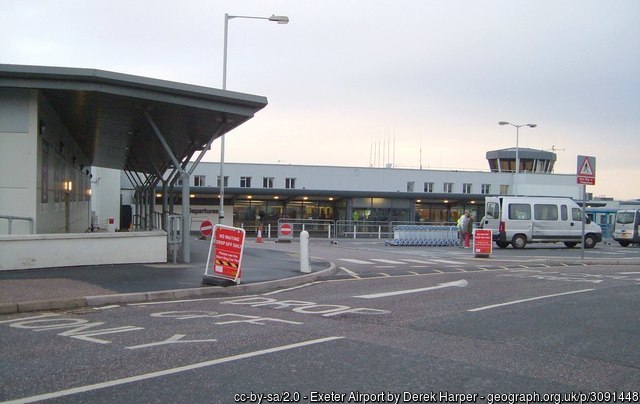 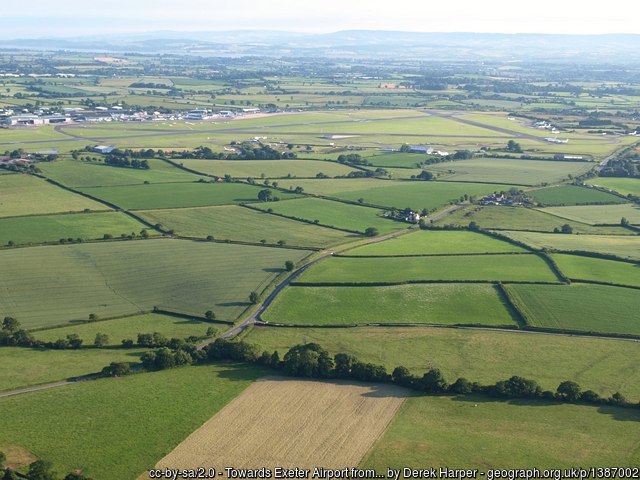 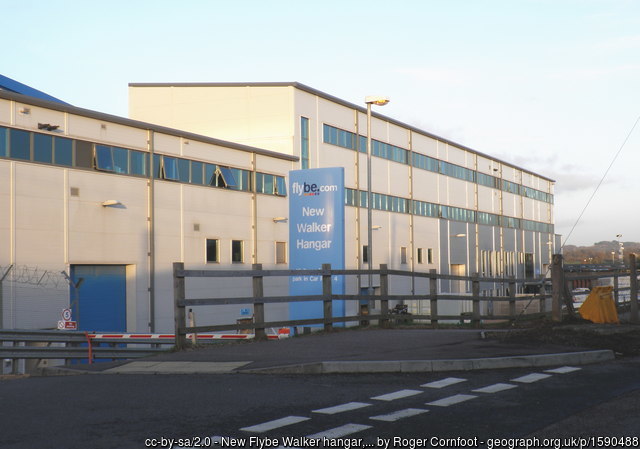 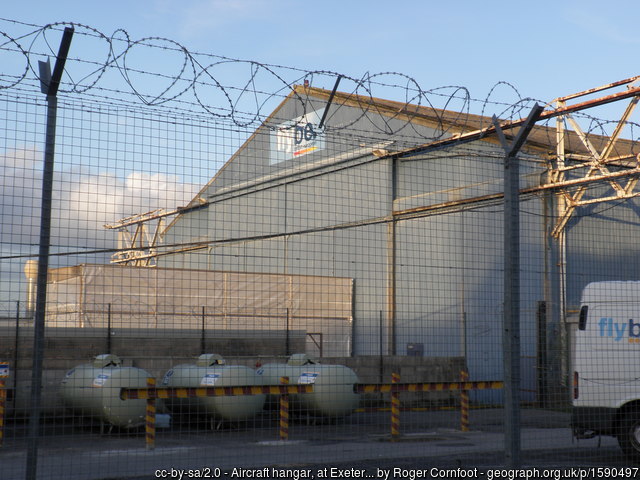 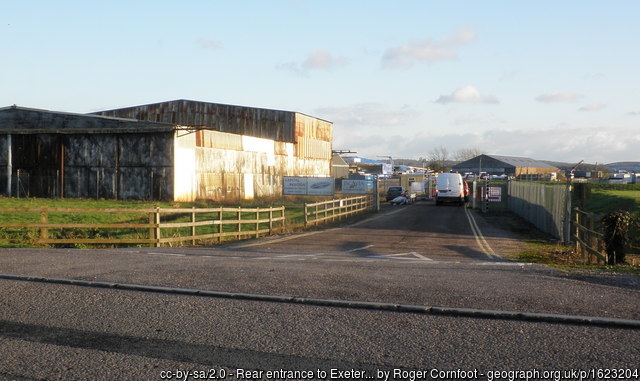 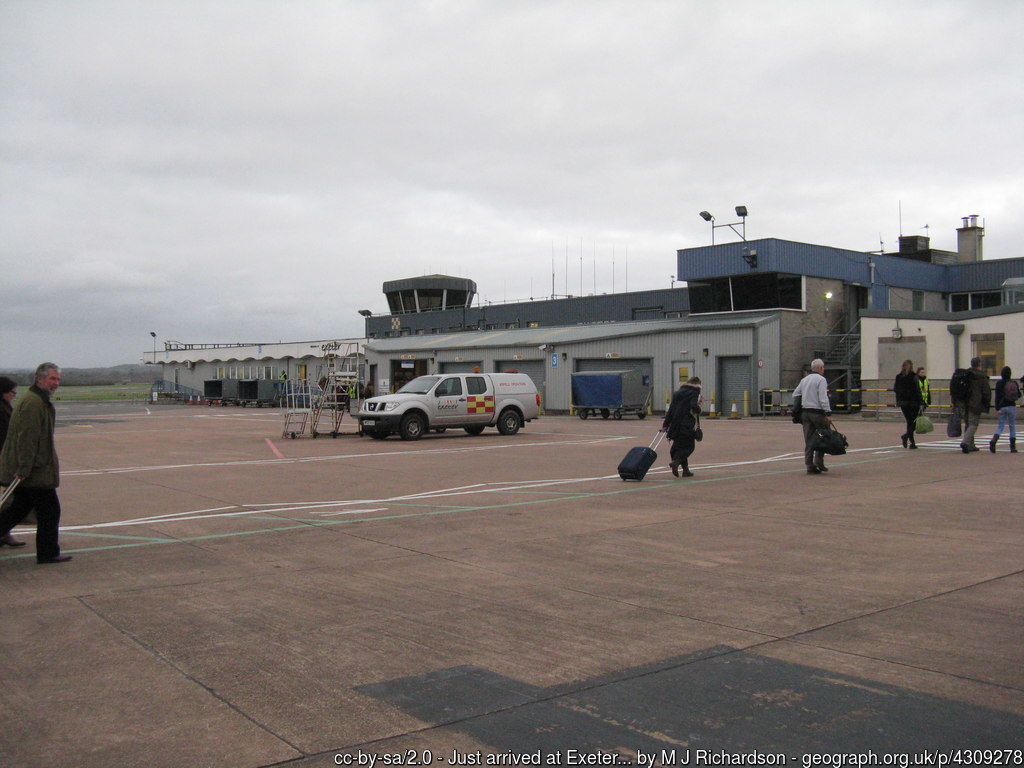 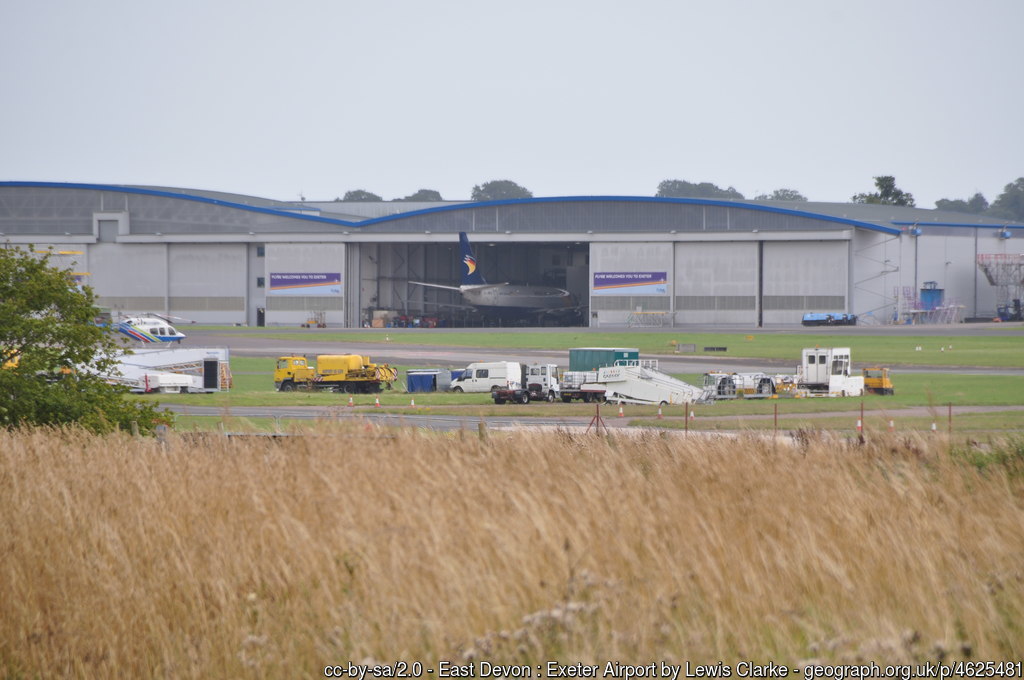 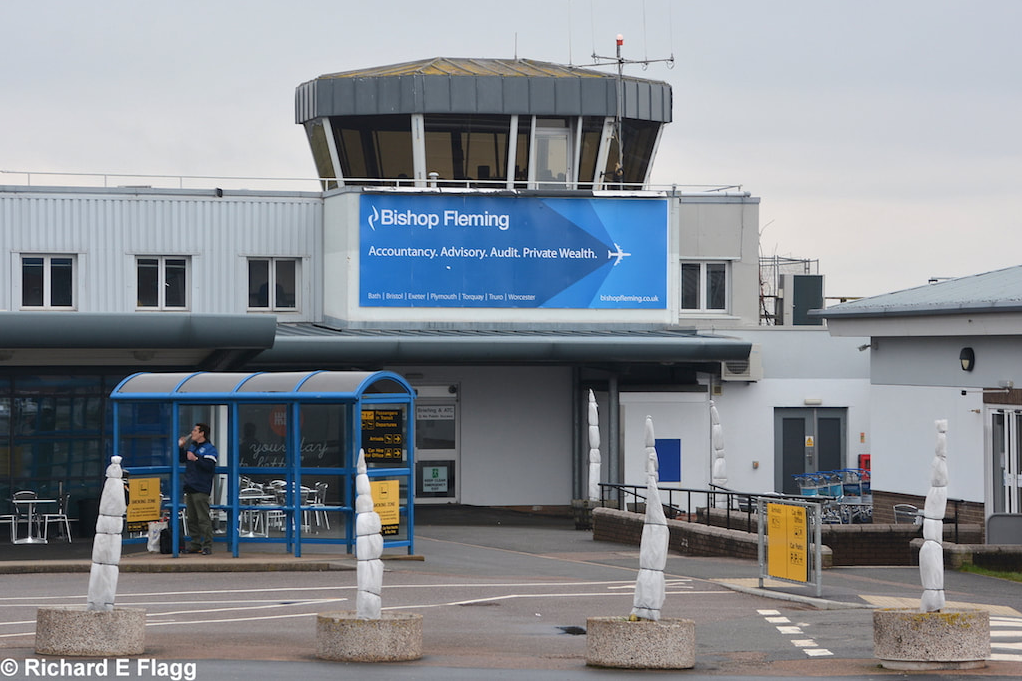 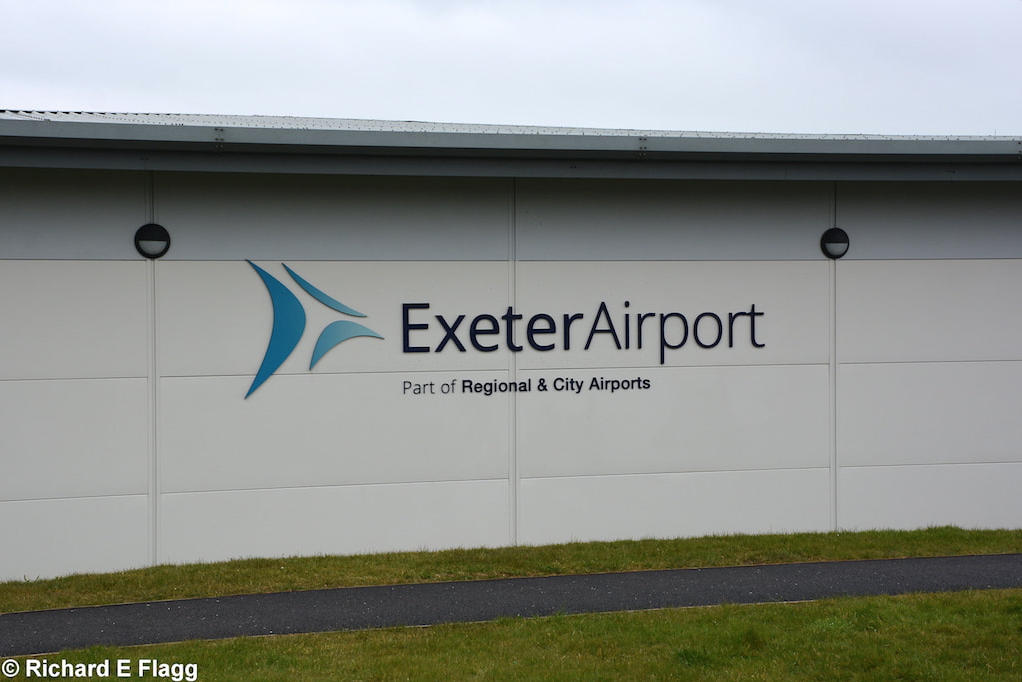 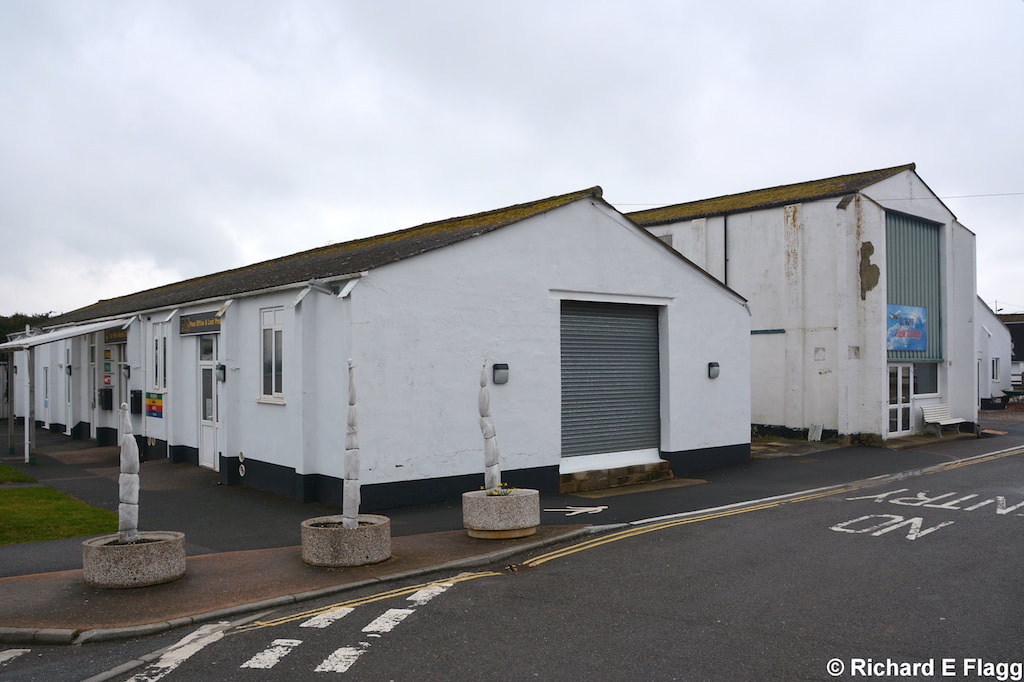 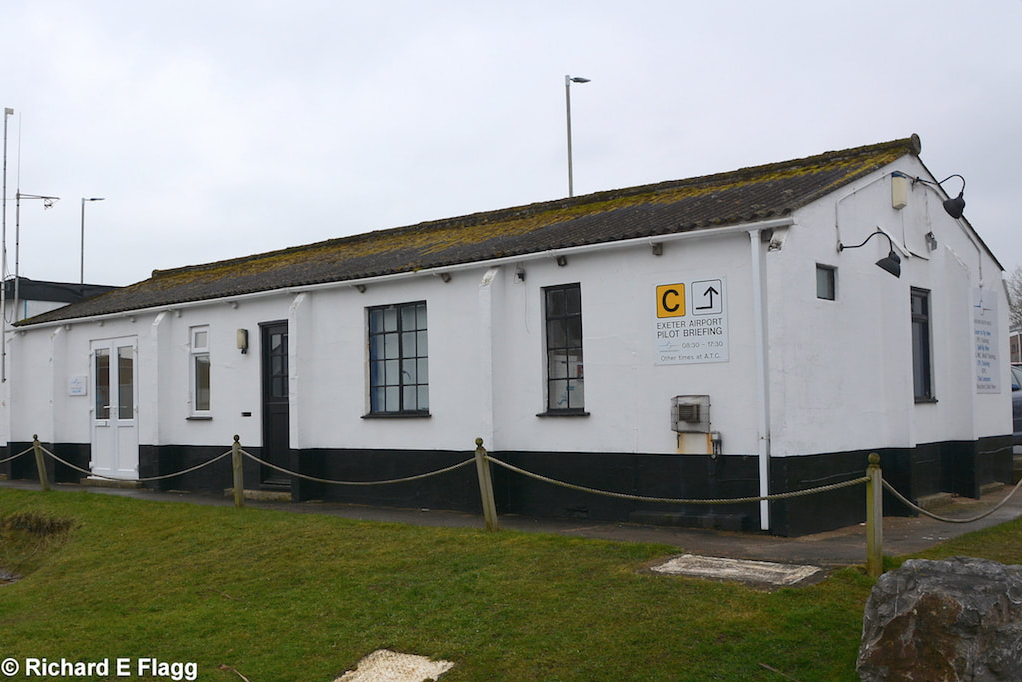 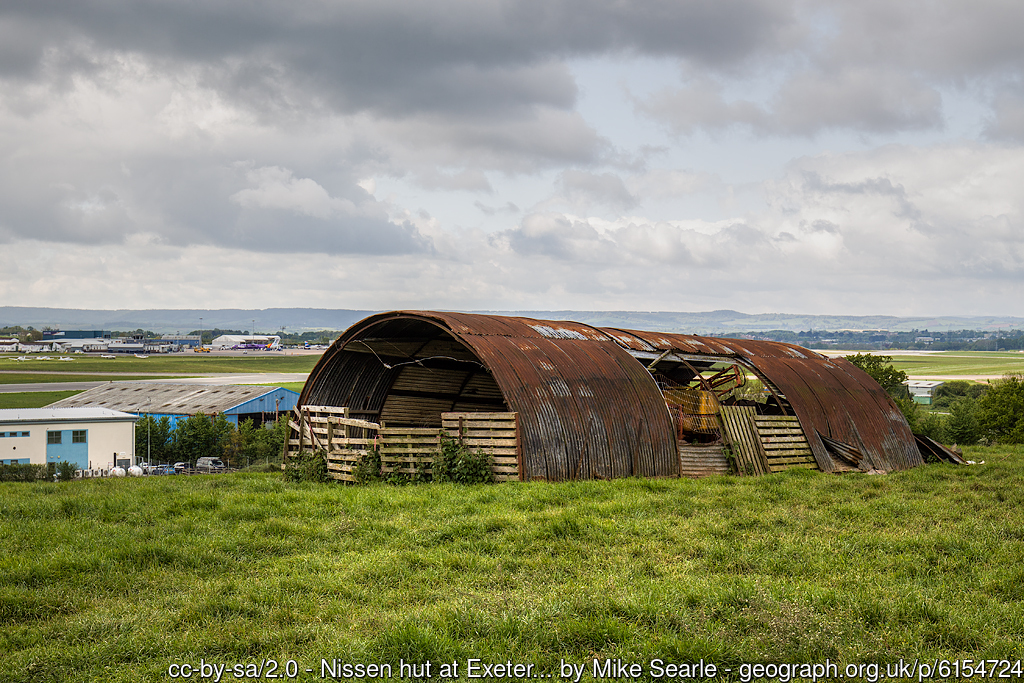 The opening of Exeter Airport, 1938. Courtesy of British Pathé