Prior to the D-Day landings, the Americans forecast the number of fatalities they would suffer on the march to Germany. Unfortunately the plan significantly underestimated the losses, primarily because of the Battle of the Bulge, and as a result the number and size of the cemeteries was insufficient. At the end of the war a consolidation took place requiring the cemetery at Fosses-La-Ville to be removed. From the time that it opened on the 8 September, 1944 to the end of the war, the cemetery had accumulated 2,199 American soldiers and the bodies of 96 “Allied Brothers in Arms”. The majority of these Allied fatalities were made up of fliers who were downed over American held territory and by the troops of the Chaudiere Regiment of the Canadian Army. Many American soldiers were removed to the United States at the request of their families but the bodies of the Commonwealth combatants were transferred to another cemetery at Leopoldsburg in northern Belgium. The six crewmen of WL-U were disinterred and the bodies were placed in metal caskets that were in turn placed in wooden cases for transportation to Leopoldsburg. This operation was done with great respect and care. They were reburied with full military honours at Leopoldsburg.

The people of Fosses-La-Ville adopted graves and cared for the fallen as if they were their own. Their respect for what these men had sacrificed for them was heart-felt and genuine and is still strong today. By 12 July all the bodies had been removed and the cemetery was closed. All that remains is a small monument recognising the historic significance of the locale but it is not forgotten.

Leopoldsburg is a typical Flemish town in the Limburg (N/E) region of Belgium. Two beautifully kept cemeteries have been carved into a treed area on the outskirts of town. One cemetery honours the graves of Belgians who died in WWI. The gravestones are solid tablets bearing bronze plaques individually cast with the identity of the fallen soldier. The graves are arranged in sweeping curves and swirls with an almost poetic elegance. Just down the road is a second cemetery opened during WWII to receive some of the Commonwealth forces killed in Belgium. Among the 801 graves, arranged symmetrically in a mirrored pattern are two grave markers, identical to all the rest with the exception of a cross being engraved in place of the normal regimental emblem. The symbol is the Victoria Cross, the highest honour bestowed on a Commonwealth combatant.

One of the two stones marks the resting place of John Harper VC., a corporal in the York and Lancaster Regiment of the British Army. He received the honour posthumously for his heroism in Antwerp 29 September, 1944. 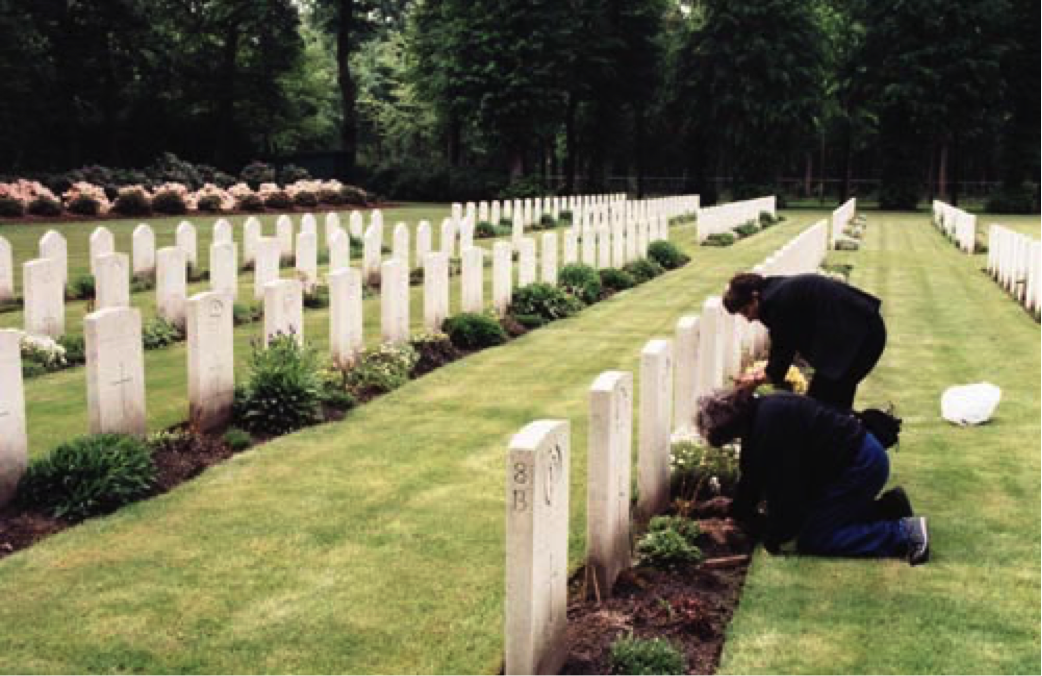 Joanne and Margaret planting flowers at the graves of the crew

The other stone marks the place of Major Edwin Swales VC. DFC. of the South African Air Force who began the war as a soldier in the Natal Mounted Rifles. He then fought in Egypt in 1942 with the 1st South African Infantry division with the rank of Sergeant Major. While in Egypt he became fascinated with flying and transferred to the South African Air Force where he acquired his wings in June 1943 and quickly progressed to join the R. A. F. in England. He was attacked by fighters on five different occasions on his 33rd sortie and for his coolness under fire was awarded the DFC. Flying ahead of the group as the “master bomber” on his 43rd operational sortie his plane was attacked several times and having lost two engines and leaking fuel, stayed over the target giving aiming instructions until the attack had ended. Despite having crash landed successfully twice before, he was unable to survive the crash on his return trip from this mission. He stayed at the controls allowing his crew to escape safely but was unable to save his own life.

Although these two men received the highest award for valour under fire, it is fitting that their graves are identical to those of the other servicemen buried here. All of these men died trying to do their best for exactly the same cause and for that they were all equal. It was a matter of fate as to how they met their ends and whether or not they were recognised by military honours. In the case of the crew of WL-U nobody knows the individual acts of heroism that took place in the plane as it hurtled to the ground. We are only left to imagine.