A quick check with the crew, release brakes and throttle up. It was time to get underway. Les held the throttles forward and the four, fourteen cylinder rotary engines producing 1,650 horsepower each hauled the big craft down the runway in the dark of the night. Fully loaded the plane weighed around 65,000 pounds and it took Jim’s full mental concentration and physical effort to get the plane into the air successfully. There was no margin for error in the speed at lift off or in the rate of climb. Any loss of power or failure of a control surface could result in disaster. Unfortunately, at another airfield where planes of the 425 Squadron were lifting off to join the raid, F/O J. Desmarais and his whole crew were killed when their plane crashed shortly after takeoff. Full of gasoline, bombs and incendiaries, there would have been a tremendous explosion. As their plane gained altitude the crew heaved a sigh of relief and settled in to the task of positioning themselves correctly within the mass of planes forming the mission. They were joined in the air by 187 other Halifaxes from the 408, 415, 420, 425, 426, 427, 429, and 432 squadrons along with 42 Lancasters from the 419, 428, and 431 Squadrons. The 400 series of squadrons were all part of 6 Group that was created for the Royal Canadian Air Force. In total there were 523 aircraft in the air after they were joined by British crews from Nos. 4 and 8 Groups. Croft was one of the most northerly fields in England utilised for raids on mainland Europe. As the Croft planes moved south at an altitude of about 8,000 ft. on a course set for Reading (just to the west of London) they were joined by other planes in closely choreographed lift-offs and flight plans. It was a manoeuvre that had been well rehearsed by flight headquarters as almost every night, weather permitting, there could be more than a thousand planes in the air with many different destinations and targets. On this day there were also 317 Lancasters heading to Ulm, Germany, 280 Lancasters to Munich and 44 Mosquitoes were leading a “spoof” raid to Hanau while 26 more headed for Munster. Five more Mosquitoes went to Hallendorf to deliver their payloads.

A heading change was made at Reading and the convoy of planes proceeded in a more westerly direction over the English Channel towards the Charlerois area in Belgium. Their altitude increased gradually to an operational height of 17,000 ft. and they settled in on their new course with the aid of their “GEE” radio navigation coverage and only thing visible being the red-hot exhausts of the engines on the planes ahead of them. 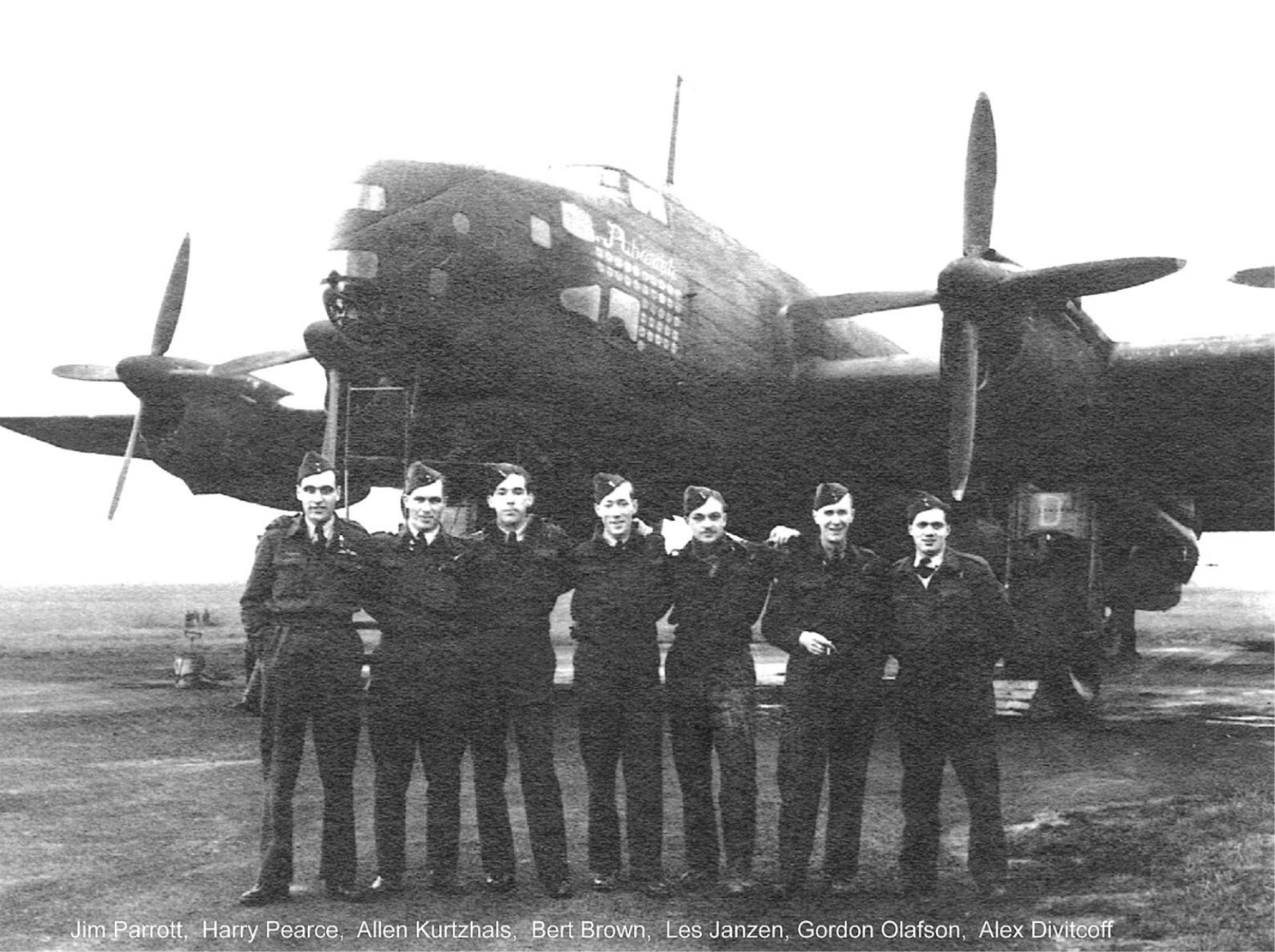 Shortly after setting their course the pilot reported to the crew that he was not feeling well but didn’t think he was bad enough not to continue. They became worried that perhaps his oxygen supply was not working so the Engineer and Navigator checked out the supply and piping but everything appeared to be working satisfactorily. Just to be sure, they brought out the portable oxygen bottle and hooked Jim up. He continued to feel poorly and appeared to be in some distress so Allan Kurtzhals left his position to sit up beside the pilot on the fold- down seat to his right to give him any help that he required. The Navigator suggested on several occasions that they could turn back but the pilot refused saying that he would make it. They were several minutes behind and the plane seemed to be weaving a little but otherwise the weather was clear and there was no reported enemy activity.