Grangemouth Airfield, active during 1939-1955, was later absorbed by Grangemouth Refinery.

Fewer airfields could count themselves unluckier than Grangemouth. The idea of flying in this general area had in fact gained a tentative foothold from the 1920s onwards when the prominent Salvesen family envisaged civil aviation could be a reality but it was not until 1939 that this airfield appeared, and then operated by Scottish Aviation Ltd of Prestwick fame.

Two years earlier, the Maybury Committee had stated how an airport was urgently needed for central Scotland, and as a result a vast amount of land – 550 acres – was eventually acquired in order for Grangemouth to open to flying on 1 May 1939. Exactly two months later the new Central Scotland Airport was formally opened by none other than the ‘father of the RAF’, Viscount Trenchard, but then barely another two months had passed when Britain declared war on Germany and civil flying in its normal guise had to cease.

However, all was not lost as Scottish Aviation had already established some military flying training here. Although the resident units concerned also quickly left shortly into wartime, their old home with its impressive terminal and two large hangars now housed a few RAF Fighter Command units to counter any possible bombing raids on Clydeside and the surrounding area. Nos 141 and 263 Squadrons with their mixture of Bristol Blenheims, Gloster Gladiators and Hawker Hurricanes notably stayed at Grangemouth until leaving in August/September 1940 but by then it was considered there would be no Luftwaffe threat and so the airfield was reallocated once again, this time for fighter pilot training. No 614 Squadron and its Army Co-operation Westland Lysanders remained until March 1941 – for part of the time performing good coastal patrol work - but No 58 Operational Training Unit had formed the previous December, and by February 1941 reached full strength with its complement of Supermarine Spitfires plus a lesser number of Miles Masters.

The OTU became Grangemouth’s main wartime resident, the airfield witnessing not only intensive fighter pilot flying instruction but an increasingly strong Polish presence. The inevitable strain which occurred was alleviated by first the creation of two hard runways, additional hangarage and then in March 1942 Balado Bridge of later T in the Park fame becoming this airfield’s satellite. All this was not to last though as, following two changes of name and a certain shift in fighter training demands, what had become No 2 Tactical Exercise Unit disbanded on 25 June 1944.

From this time on Grangemouth’s fortunes steadily declined as the airfield shifted from one duty to another without any real sense of permanence. For the remainder of World War Two and subsequently the next decade several RAF support elements resided, primarily Nos 14 and 243 Maintenance Units for storage and No 2 Gliding School, but both ideas and priorities – whether at military or civil level - had gradually subtly changed and the grand ideas of in particular an airport here soon faded. By 1946 squatters had come to Grangemouth for period owing to a housing shortage in Britain.

Hopes of more sustained flying ended in 1949 when the de Havilland Tiger Moths of No 13 Reserve Flying School had to leave after only a year’s stay due to impending oil industry expansion, while Grangemouth Town Council clearly wanted the land to create more housing. Another deeply unfortunate development happened in 1952 when the terminal building was tragically destroyed in a fire, and eventually the council had its way three years later as Grangemouth finally officially closed in June 1955, No 2 GS disbanding on 1 September.

By the 1960s approved housing and industrial expansion had already claimed much of Grangemouth but the town’s airfield, made – and indeed still does make – a difference to the everyday lives of local inhabitants here. Aside from playing a major part in the winning of the Second World War, it allowed long resident oil companies to prosper on its land to ensure critically important ongoing employment and financial security to the present day, while there is still a surprising amount of the airfield left continuing to help others.

The two pre-war hangars still remain for industrial use, part of the land has become Inchyra Park for various recreational activities and one of the two runways is better known these days as Inchyra Road. Happily, the airfield is also remembered with considerable affection, as has become evident much more recently with the creation of a replica Spitfire and associated unit memorial wall; a nearby pub which has seen still more recent rebranding also commemorates past aviation links through its immediately noticeable Spitfire logo. 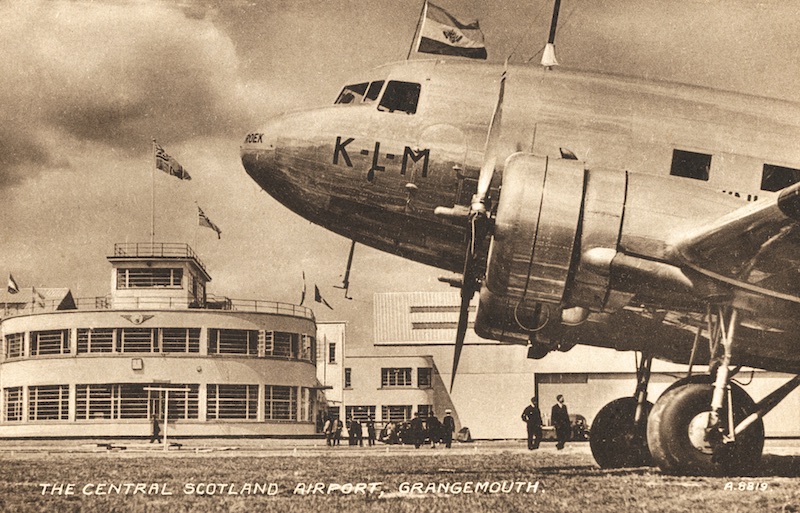 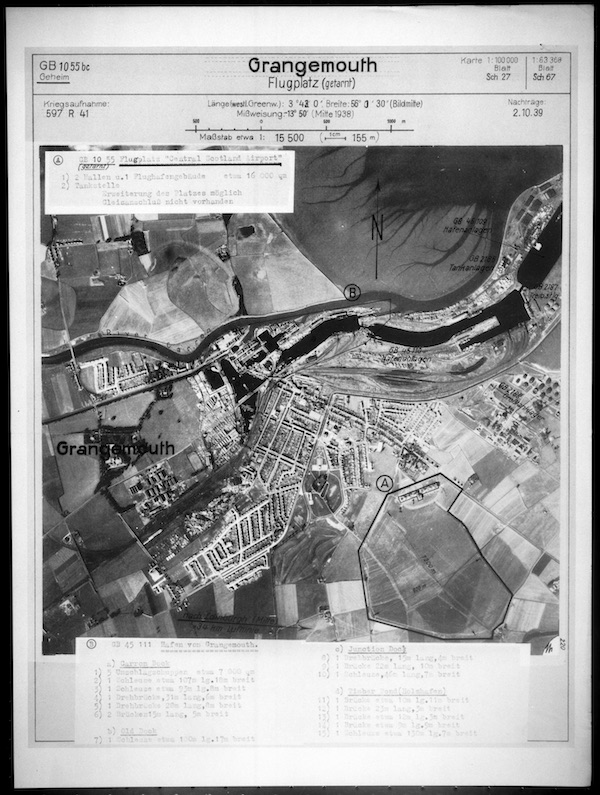 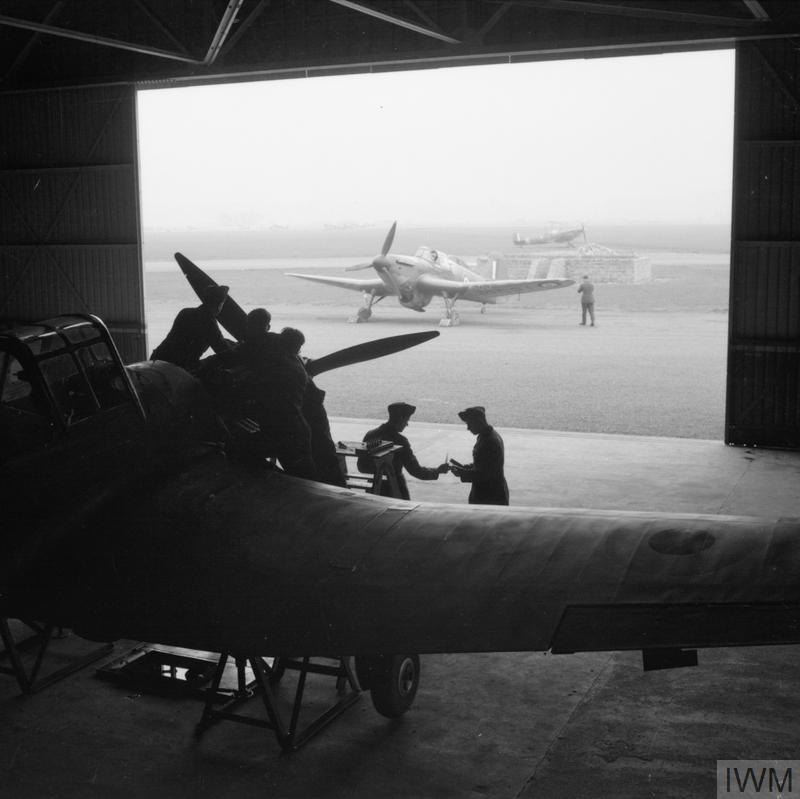 Aircraft of No 58 Operational Training Unit at Grangemouth during the Second World War. Two Miles Masters and a Supermarine Spitfire in the background. © IWM (H 9190) 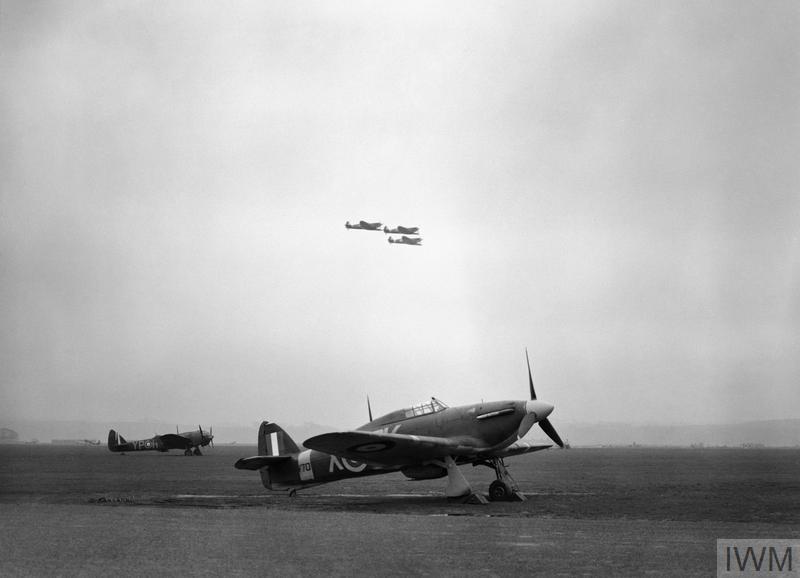 Aircraft of Fighter Command on display for the press at Grangemouth in Scotland, 25 April 1941. In the foreground is a Hawker Hurricane Mk I of No 315 (Polish) Squadron; in the background a Bristol Blenheim Mk IF of No 23 Squadron; and overhead, three Supermarine Spitfires of No 58 Operational Training Unit. © IWM (H 9179) 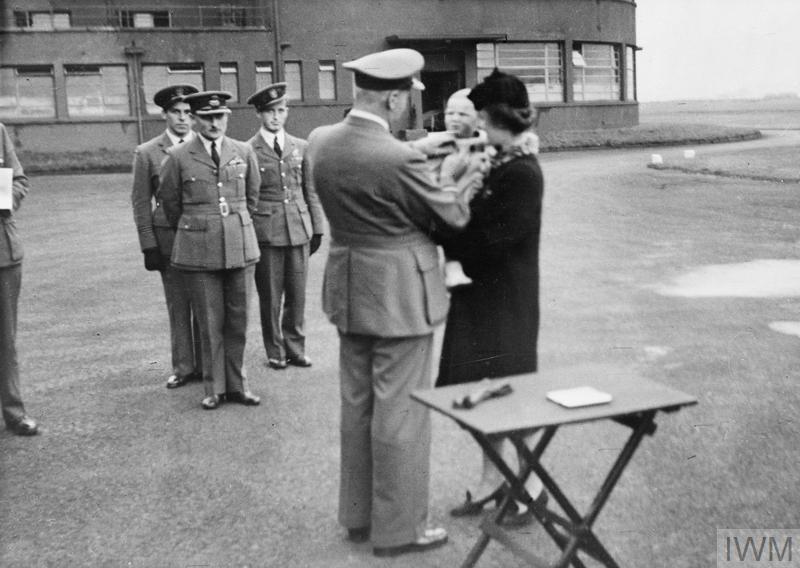 On 21 September 1942 at Grangemouth, a 10 month old baby, Marian Edward Bełc, son of Pilot Officer Marian Bełc, received the Distinguished Flying Cross awarded to his father, killed in a flying accident before he could himself receive the decoration. © IWM (CH 7431) 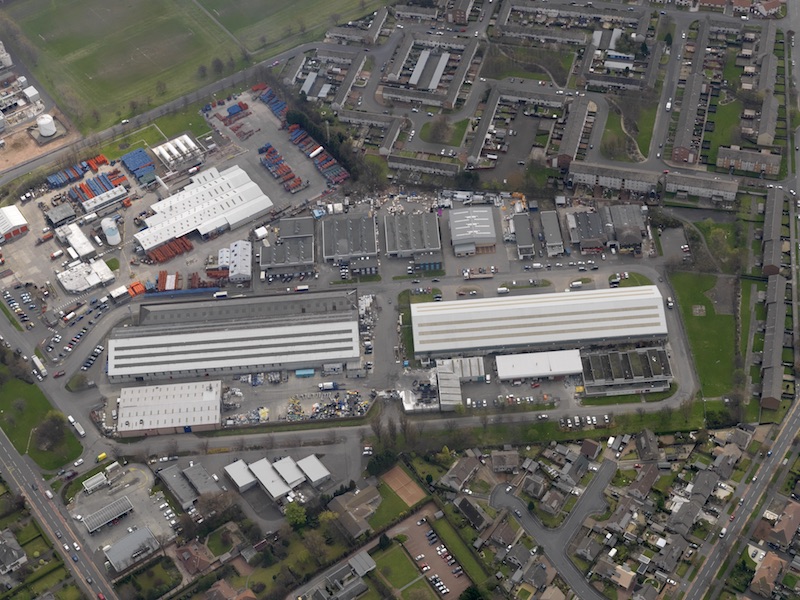 Aerial view of the airfield, centred on the aircraft hangars, taken from the north-west, 25 April 2008. © Crown Copyright: HES. Licensor canmore.org.uk 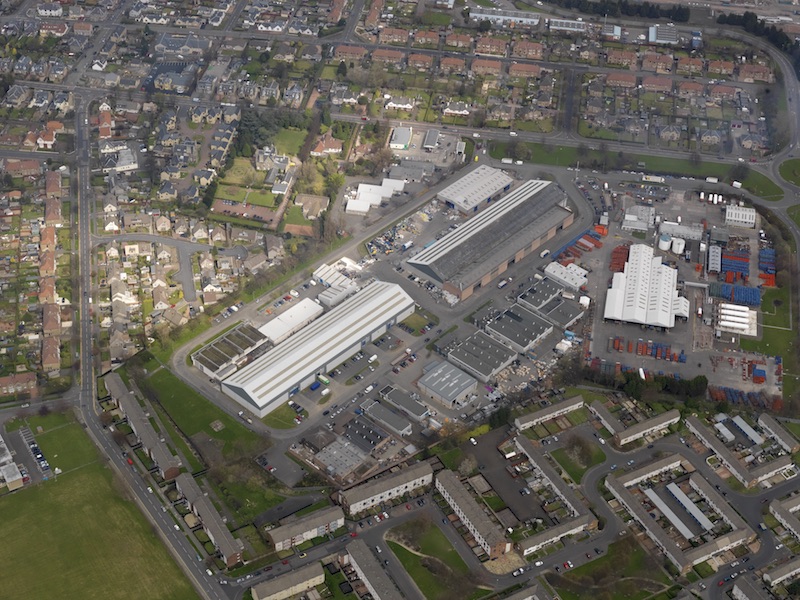 Aerial view of the airfield, centred on the aircraft hangars, taken from the south-south-west, 25 April 2008. © Crown Copyright: HES. Licensor canmore.org.uk 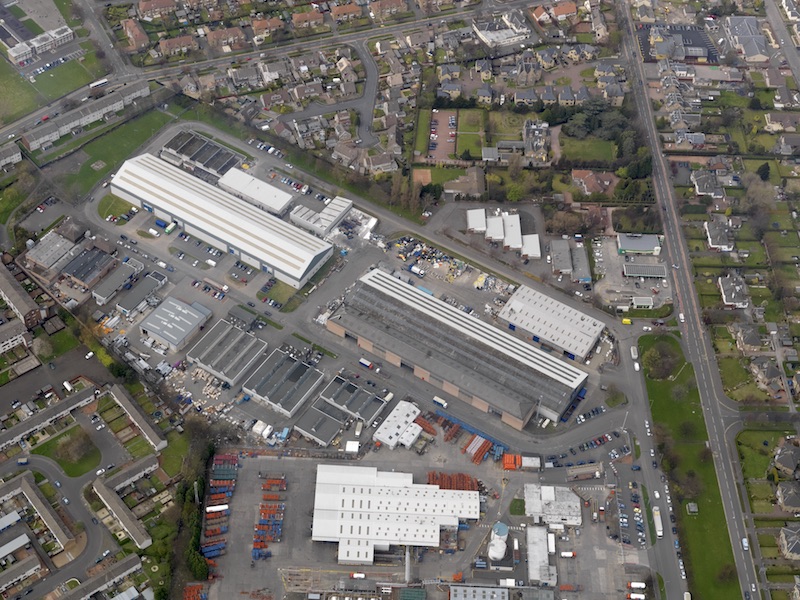 Aerial view of the airfield, centred on the aircraft hangars, taken from the south-east, 25 April 2008. © Crown Copyright: HES. Licensor canmore.org.uk 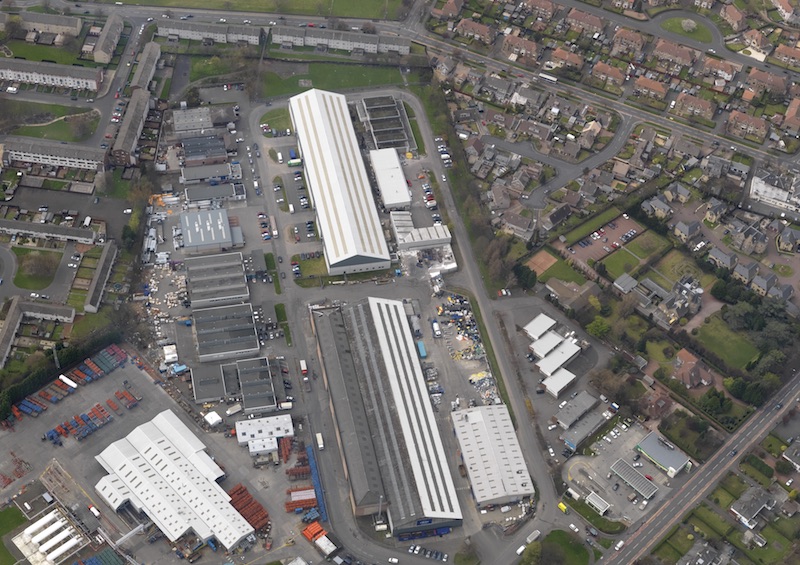 Aerial view of the airfield, centred on the aircraft hangars, taken from the north-east, 25 April 2008. © Crown Copyright: HES. Licensor canmore.org.uk 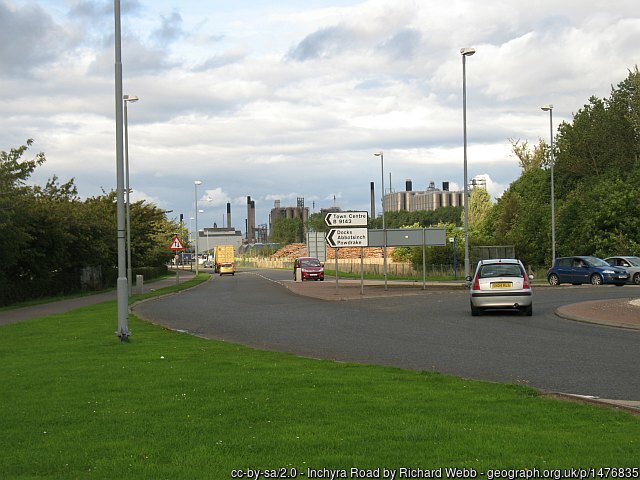 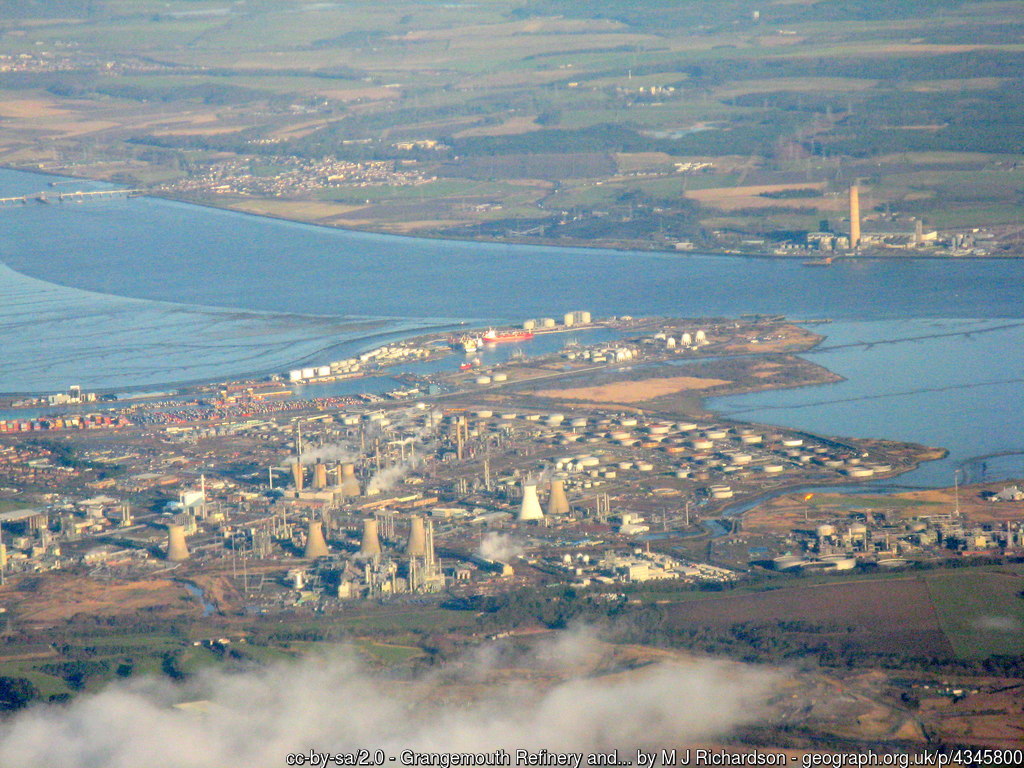 Aerial view of Grangemouth Refinery, the site of the airfield, 9 February 2015. 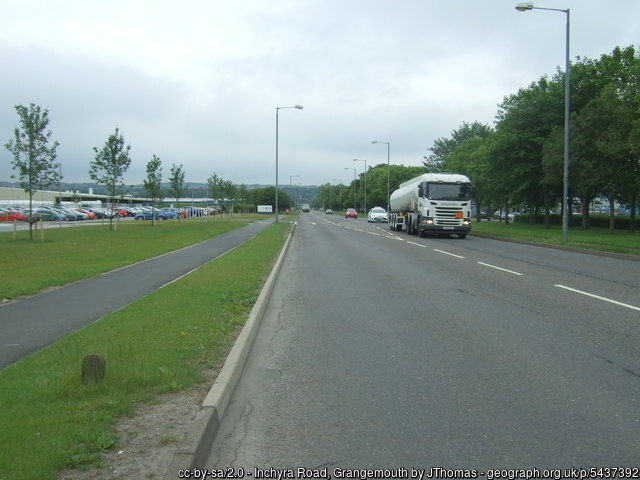